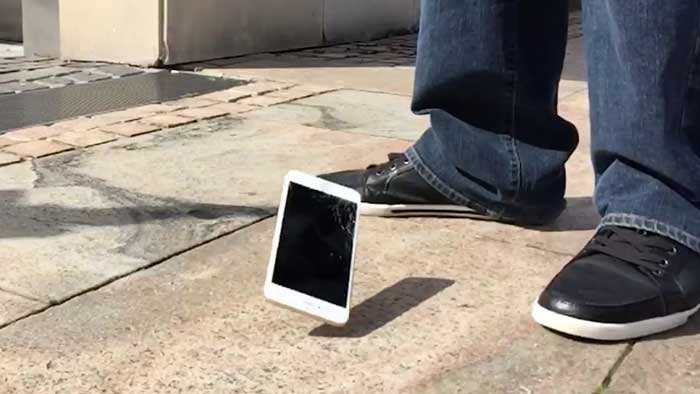 We’ve all dropped our cell phone at some point. Some of us get lucky and there’s no harm done. Some of aren’t so lucky and end up looking at a spider’s web of cracks on the display.

Occasionally, some of us are unlucky enough to have our mishap filmed by someone else. These videos from YouTube show just some of those occasions.

This is, quite possibly, the most famous cell phone drop ever. A young man gets the first iPhone 6 in Perth, Australia and, when asked to do the unboxing for the TV cameras, gets it all wrong. Fortunately (or unfortunately, if you prefer) there was no damage done.

If you’re going to pass your phone to someone, it’s probably best to both be standing still at the time. Doing it while passing by each other on a roller-coaster is probably not the best idea.

Sometimes, you just need to be phone out and recording. God rewards us in odd ways, sometimes.

More and more, you can see motorcycles that have cell phones in a holder. Of course, if you don’t put it in the holder properly, wind can be the enemy.

Remember back in 2015, before the days of the Tide Pod challenge? Well we had the Phone Pinch Challenge. This is when people would hold their cellphone over a potentially disastrous drop, such as a cliff edge or a drain. The idea was to hold on to as little of the cell phone as possible. Quite how a winner was decided is anybody’s guess. Losers, however, are easily identified.

When The Hammer Falls

Another massively popular video, there have been debates about whether this video genuine or not. Frankly, we’re hoping that it is genuine, as that makes it very funny indeed.

This is very, very funny. If you want to be careful never to drop your phone, make sure you keep a tight hold of it. This is important, even if you are – literally  – walking into trouble. Not a drop, as such, but still very worthy of inclusion.

The screen of any smartphone is always the real weak spot of the whole device. In many cases, a drop of a couple of feet onto tiles or cement will kill the display easily. But what if you drop it 1000 feet out of an airplane? Well, it makes the first sentence of this paragraph look like a big fat lie.