We’re all wireless now, almost by default. Few home broadband connections use an ethernet cable to connect to the network nowadays. Indeed, most internet traffic is now to a mobile device, even in the home.

With our increased use of the internet, perhaps even our dependency on it, we expect to be able to get online wherever we are. This includes every room in the house, of course. But the nature of domestic dwellings means there’s an awful lot of interference built right in. Insulated walls, metal frames and many more elements all absorb wireless signals or cause it to be less effective.

Thankfully, there is a way to get past the dead spots you may have. Wireless Range Extenders receive the signal, boost it, and then send it out from their location. The extender acts as a relay for the signal from the router, meaning more of it reaches further than would otherwise be the case.

If you are familiar with wireless routers, you may be aware that they all have a rated throughput speed. This appears in the form of a letter(s) and/or number. The standard way of indicating the network speed is through the 802.11 b/g/n/ac system. From b to ac, each standard is faster than the previous. Not all routers will have all suffixes, but each new standard is backwardly compatible with the previous. Within the ac standard, there are also variations of total capacity.

As an example, you may see a router that has the name or rating of AC1900. This is an ac router with a theoretical total throughput of 1900Mbps. AC3200 routers have a theoretical total of 3200Mbps. This doesn’t mean you will get that speed, of course. As well as relying on the speed of the incoming connection, this total is split across however many bands are available on the router. Typically, there are 2 bands, 2.4GHz and 5Ghz. These will share the total available capacity. 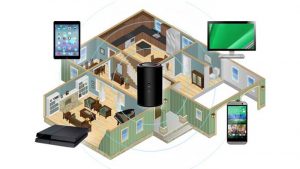 To get the best out of your network, the wireless extender should at least match the rating of your router. If you have an extender with a lower rating, for example you have an AC3200 router and an AC1900 extender, the extender will act as a bottleneck, as it can’t process the router signal quickly enough. By all means have an AC3200 extender and an AC1900 router, as you can then upgrade your router at some point without leaving the extender speed behind.

There are two basic types of wireless range extender. The first looks very similar to a router and, indeed, has all the same ports and features. Instead of receiving the signal by cable in the way the point of entry router does, it simply uses a wireless signal. If you have stayed in a hotel and seen what looks like a router screwed high up on the wall, it is likely to be a range extender.

The second type is a much smaller, plug-in, affair. Although much less expensive than their larger cousins, they are also less capable from a connection standpoint. There is likely to be a single LAN (ethernet) port and there will rarely be any USB capability. Antennae are often internal so as to have as discreet a profile as possible, although some do have external antennae. Some plug-in extenders do have a pass through feature so plugs for other devices or household appliances can still be used in the same outlet. If you’ve ever used a timer for lamps in an outlet, you’ll get the idea.

Setting Up A Wireless Range Extender

It used to take a Noble prize in physics to set up any kind or range extender. Now, fortunately, manufacturers have realised they need to make it simpler. It is often little different to the way you would set up a network on a standard router. The key is that the range extender effectively creates a new network. This means you will probably see more than one available network the first time you login to your home setup. Otherwise, all it will take is a browser to get up and running in minutes.

Essentially, you connect your wireless range extender to your router as you would any other device. Once done, it will be available to nearby mobile devices.

As mentioned above, a wireless range extender creates its own network. If your signal from the router is sufficiently poor in some areas, should you enter that area you will need to log on to the extended network. It’s better than no signal at all, of course, but it’s still a step you may need to take. Also, because of the battle for bandwidth, extenders usually operate at about half the speed of the main router. The more extenders, the bigger the drop.

Some manufacturers allow the 2.4GHz or 5GHz band to be dedicated to carry the signal to the extender. This helps alleviate congestion for those not connected to the extender side of the network.

Open Up Your Home

If you do have signal dead spots around your home, a wireless range extender is incredibly useful. There are some drawbacks, but these are very minor when weighed against the benefits.