Virtual Reality has been around for a long time. But, like 3D movies and TV, it comes and goes faster than a tornado. It also usually leaves behind a lot of unnecessary expense for people who invested in the technology and who now have nothing to use it for.

It all started to change, though, when Google decided to bring VR to the masses through their Google Cardboard initiative. They introduced cardboard goggles which, when paired with their free app, had the ability to play VR on a smartphone. Not only did Google keep the price down to $10, they also released a plan so people could make their own goggles.

Of course, what came next was the rapid expansion of this new genre of smartphone use. Both app developers and goggle manufacturers clamored to get on board. Incredibly, most goggle providers also made a point of keeping the cost of the goggles down. Perhaps that was in order to make them attractive alongside Google’s essentially free option. And so we now have a wide range of products available. The vast majority coming in under the $40 mark, and a lot of very good products even under $25. Yes, there are obvious exceptions, from specialist manufacturers, but we’re talking about consumer goggles which allow a great introduction to VR without breaking the bank.

With a pair of goggles and the right app, you can now easily watch immersive video from hundreds of content providers.  To go further, you can even watch movies in a constructed 3D by way of a split screen function.

So what about the goggles? Here, we take a look at some of those which don’t even break that $25 level. 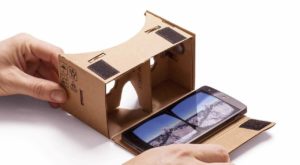 All low price goggles are based on the Google Cardboard technology. So it’s be remiss of us not to include it in this list. It’s cheap, it’s reliable and it works. It also has a button on the side which uses the magnetic sensibility of the compass in your phone to connect to the phone in a rudimentary fashion. That allows the button to click things on the screen.

Credit must go to Google for not attempting to fleece consumers with their VR implementation. They instead chose to make it universally affordable. Sadly, due to the wide range now available, Google no longer actually produce Cardboard, instead handing it off to others. 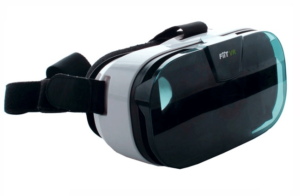 Viewed as a kind of next-generation Cardboard device, the Filit VR does everything it needs do. Yet it manages to do it better than most of its competitors. Well built and covering the most important aspects of the design such as the retaining latch for the smartphone very well. It looks smart and works terrifically. It has one of the widest fields of view we’ve seen, at 102 degrees.

As with most goggles at this price, there isn’t any kind of Bluetooth button to control the app when in use as seen on more expensive models. But small Bluetooth controllers can be had for a few dollars. A controller isn’t necessary to use any of the goggles in this list. But it is useful to save having to remove the smartphone or tablet from the headset to interact with the app. For this reason, there are usually bundles available for most goggles which includes a basic controller.

The Filit VR will take any device between 4” and 5.5” in size (not screen size, overall device size). That means devices like the Nexus 7 are excluded, but most phablet size phones can be accommodated. 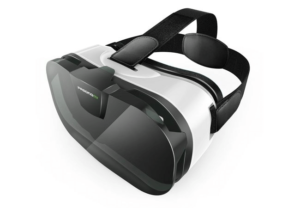 Despite the price, the Pasonomi is one of the best looking VR goggles we’ve seen. A very smart black and white affair, the device feels very well made despite weighing only 10.5 ounces. It even comes with a 5 year warranty. Again, they are available bundled with a Bluetooth control for a few dollars more. While not quite the best performing set of goggles we’ve seen, at this price, there’s little to complain about.

The 6” size limit may also put some off but, if your phone will fit, they’re a great looking place to start! 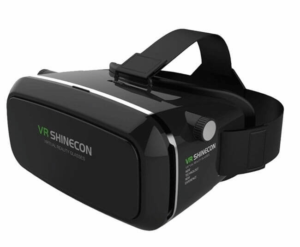 VR Shineconn actually come branded as one of many Chinese names, but all are the same device. Basically, if it looks like the one here, it’s a Shineconn or its equivalent.

It is extremely comfortable to wear even for longer periods, due to the well cushioned eyepiece. Each lens can be also adjusted individually to cater for people who may have different prescriptions in each eye. This can help to avoid headaches quite significantly, by avoiding eye-strain for longer than most of its competitors.

Again, it’s well made and, although not the best looking here, does look okay. The magnetic catch which keeps the flap closed is sturdy enough. The holding clips inside the flap to keep the phone in place also feel secure enough to take away the worry of your phone suddenly hitting the floor.

At the risk of sounding like a broken record, there no buttons on the device. But it is available in bundles with a controller. 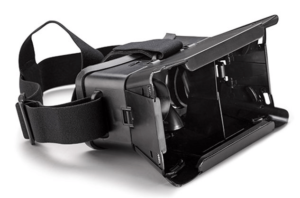 If you’ve ever seen old Russian-made SLR cameras that were around in the 1980s, the Archos is a little reminder of some of the old ways. Not that it’s ugly, as such, just that it looks like what it is, first generation.

Like the Shineconn, the lenses can be adjusted individually. Which is just as well as there’s no room at all for a pair of glasses in the eyepiece. There’s also no padding to protect your forehead and nose from the discomfort you’ll eventually feel. But to focus on what the Archos hasn’t got does it something of an injustice. It’s sturdy, and works perfectly well. And it can be bought for $15 or less if you’re willing to put a little effort into finding it.

For the money, the Archos is an ideal introduction for those who want to spend as little as possible to investigate the world of VR.

If you find yourself enjoying the delights of these bargain goggles, better examples are available for about $50 and up. That includes top end brands like Oculus running to several hundred dollars. VR is here, and it looks like it’s staying. Try it, what have you got to lose?