Gone are the days when we all went running with a twenty tucked into our sock, introducing running belts and armbands. Now we’re more likely to go running with that twenty, a credit card, our keys and, of course, a smartphone. But we can’t tuck it all into our sock, so what do we do with it all? Fortunately there are solutions. Armbands, belts and even compression shorts with pockets are all now readily available.

The cheapest, simplest and – occasionally – most irritating method of carrying all your stuff when exercising. Actually, we say “all”, but most will carry a phone and little if anything  else. But that doesn’t mean they aren’t a great idea. They cost very little and are easy to put on and off, but they do have a slight drawback. Depending on how and where the strap fastens, you can find the Velcro attaching itself to your t-shirt or running vest often enough to be really annoying.

However, if you can work past this, then armbands are great. Most will only carry your phone, so you will be back to stuffing dollar bills into your sock like the worst pole dancer ever, but they do it very well. Many are waterproof so you can be out in all weathers, and some are even waterproof for up to 30 minutes.

The Forte goes further than most armbands, in that it will take sizes up to an iPhone 7 Plus. It also has an extra pocket for cash, cards or even a single key. Made of memory foam, it weighs next to nothing, and shapes itself naturally with the movement of your arm muscles. 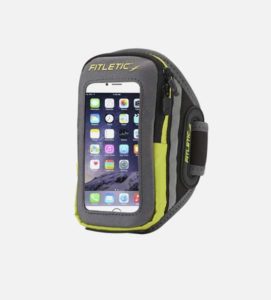 The Stridesport is also capable of taking larger, phablet-style smartphones. Water-resistant, if not fully waterproof, it also has reflective elements for extra safety when running during the hours of darkness. A great feature is the cord management system it uses to take up the slack on your earphone cable, or to let more out if needed. This makes it a great choice for those who like to dance when they run.

Expensive for an armband, certainly, but you do get more for your money than with other armbands. Full touchscreen capability, !P67 waterproofing to withstand 3 feet of water for 30 minutes, a fully waterproof headphone jack and more. Welded seams means not even the hardest downpour will seep through to your phone. It is also large enough to take up to an iPhone 7 Plus.

Continuing the trend of being able to carry larger smartphones, the Belkin is also one of the most stylish armbands available.  Made of flexible and breathable Neoprene, the Sport-Fit helps to reduce the chafing sometimes caused by materials used in the manufacture of armbands. It is also safe to hand wash without shrinking or risking damage to seams (there are none). It also looks great!

We’ve talked about the stuff we now all need to carry when out running or in the gym, and belts are a great way to do it. Sport belts are designed specially to eliminate the bouncing about that none sports belts suffer from. Try running wearing a fanny pack and you’ll know exactly what we’re talking about.

A good belt should be fully adjustable and flexible, to ensure the best possible fit. Any contents should be held snugly against the body, so movement becomes impossible and comfort is a high priority. Armbands, like the ones above, are great, but belts are becoming an increasingly practical way to carry things when running.

The FlipBelt is an altogether different kind of belt. Actually, it’s more of a band than a belt and made of a Micropoly/Lycra blend. This makes it really flexible and it fits the body snugly. There’s no buckle or snap catch, you simply step into it, and it stretches to your size. You can carry almost anything in the FlipBelt, and there’s even a clip inside for attaching keys or rings to for extra safety. Innovative and a quite brilliant way to have everything you need right with you.

The Urban Active Belt is a little bit of an armband/belt crossover. It’s definitely a belt, but is is one of the very few that have a see-thru phone pocket. Most belts are just for carrying, but the Urban Active allows you to use your phone without taking it out. This makes it very convenient indeed, and much easier to glance at the screen without interrupting your stride. There are small key pockets at either side, and the belt itself is nice and wide to keep it snug against the body. Another point in its favor is that it can go up to fit a 47″ waist, so those with a fuller figure aren’t left out.

As probably the biggest selling running belt ever, the SPIbelt must be doing something right. Like the Urban Active belt above, it does resemble a regular fanny pack, but that’s really where the similarity ends. Whereas a fanny pack just sort of hangs around your waist, the SPIbelt (like the Urban Active) fits perfectly. It is remarkably compact considering it will hold a phone, keys, credit cards etc., and shows no sign of movement even on a speedy run. As though in a nod to the 80s, the SPIbelt is made of Spandex, and reduces chafing considerably. 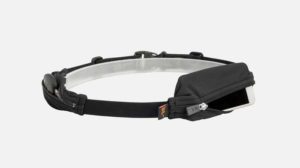 Definitely not the cheap option here. The Nathan Trail Mix is meant for serious runners who need to carry plenty of hydration or gels with them as well as their phone. A pair of holsters  allow one-handed access to water bottles, which are included, hence the higher than usual price. Stretchable material means the Nathan belt moves with you, so reducing bouncing and chafing. If running is more than just a hobby, the Nathan Trail Mix is ideal.

Running belts and armbands are one of the most effective ways to have a successful run. They assist with having your hands free while running. Without worrying about your personal items you are capable of being more focused on your run! While running at the gym, your belt or armband can hold your locker key OR even your car keys depending on what you choose. Ultimately, choosing the right running belts or armbands is up to you! What would be more efficient for you?