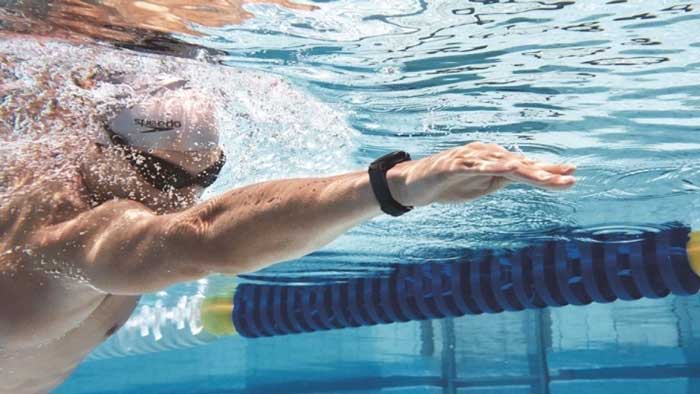 Getting and keeping has been a thing for several decades now, after first seeing  a massive surge in the early 80s. Activities like aerobics brought organised fitness to the masses and made it easier to stay healthy. Today we have a massive array of different things we can do to keep fit and also lots of ways to track how we do it. Fitness trackers have exploded in popularity in the past 2 or 3 years, with many manufacturers now producing them. The number of apps to support the various trackers has also increased, meaning more ways than ever to interpret your activity. 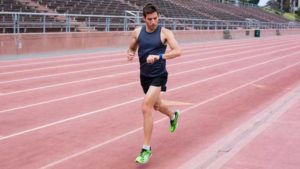 The first thing you should consider is that we are mainly talking about true fitness trackers here. Some smart watches have fitness tracking, but that’s not what we’re looking at.

Fitness trackers can have features like heart rate monitor and sleep trackers. Others may be OS-dependant eg Android or iOS only. Some have a display, but some don’t and require an app to see progress. Some partner with 3rd party apps, others are only compatible with an official app. There are trackers available for specific activities such as swimming. There are many variations on what manufacturers think fitness trackers should be, with varying success.

With all that in mind, we take a look at some of the best Fitness Trackers available as we enter 2018. 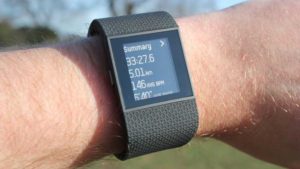 The Surge is not just Fitbit’s most popular fitness tracker, it’s also one of the most popular, period. It has actually been around for a couple of years, and it can even be argued that later Fitbit devices have surpassed it but that would be to not tell the whole story. In terms of features, the Surge beats almost everything else. Although a fitness tracker, it does also relay some notifications from your smartphone via the app. There’s GPS, a heartrat monitor, step tracker, sleep tracker and much more. Fitbit Surge is also one of the few standalone trackers with GPS built in. This makes it one of the best all-rounders there is.

The price of the Fitbit Surge might be a little on the high side, but you definitely get what you pay for. The official Fitbit App is also one of the best there is, making monitoring your progress a breeze.

The Moov Now is the 2nd generation device from the company. Because of its low price, it would be easy to just ignore the Now, as it can’t possibly match all the features of more expensive trackers. But you’d be foolish just to dismiss it without checking out exactly what it can do.

Yes, there’s no screen, but that’s a big part of why it costs so little. Other than that, it can match every other tracker in almost every department. It can track everything from walking to sprinting. You can track your sleep, as well as using it for boxing-style workouts. The Moov Now will guide you through workouts by way of a (quite robotic) voice although it must be said it can be difficult to hear. You can even go swimming with the Moov Now as it is waterproof and able to detect strokes. Oh, and when you’re only getting a few days battery life with other trackers, with the Moov Now you’ll get 6 months. That’s where having no screen shows itself to not be so bad after all.

The app is thorough and packed full of information to help you keep on top of your regime. There are a couple of quirks, such as the device must be worn a specific way up for it to work. Also it must be on your ankle to measure jogging/running. Otherwise, for this money, it’s unbeatable. 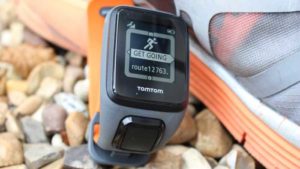 GPS Navigation manufacturers like TomTom and Garmin have realized that their core business is changing. GPS is now being built into cars, reducing demand for separate units. As a result, attentions have turned to other areas, of which fitness trackers is one. The Spark 3 is an excellent tracker, if a little expensive. GPS is (of course) included, and it has a built-in music player. You will need Bluetooth earphones, but it’s still a pretty unique feature. There’s a heart-rate monitor and even simple navigation.

Although the menu system is a little frustrating, the screen is clear and easy to read. The Spark 3 is also a pretty good looking piece of wearable technology.

The second device from GPS specialists, the VivoFit 3 is an excellent choice.

There is no option to get notifications from your phone, but that isn’t such a big deal with a tracker this good. The always-on clock display allows the VivoFit 3 to function as a watch, making it more useful than many. Looks-wise, it all depends on your taste. The VivoFit 3 has been described as both the ugliest and prettiest fitness tracker, so make your own mind up. As one of the cheaper trackers, the VivoFit 3 is limited to measuring walking/running, but it does this really well.

The app is a little functional, but effective, but where the VivoFit 3 excels is in battery life. Instead of being rechargeable, the device uses a replaceable battery. Although this might feel like a step backwards, you only need do this once a year. When you consider you will be plugging others in every few days, there’s no doubting which method is preferable.

Pound for pound, the Charge 2 is probably the best tracker you can buy. There are trackers which do more, but they also cost more. There’s no GPS, and it isn’t waterproof, but the Charge 2 does have a heartrate monitor. It also has a screen showing current data and some notifications.

Rather than being a running companion, the Charge 2 is more geared towards general fitness monitoring.  You can set goals for each day, and can also track multiple sports simultaneously. This means walking won’t be confused with a gym workout. The Charge 2 also doesn’t need telling when you are exercising. Instead, it will detect sudden changes in activity and start monitoring accordingly.

The ideal compromise between features and price, you will be pushed to find a better tracker than this. 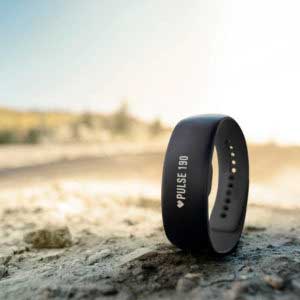 Although superficially similar to other trackers, the iFit has enough to make it stand out from most. The display constantly shows an updated heart rate, and swiping left and right can also show calories, steps taken and distance traveled. The tracking of calories isn’t all that common on fitness devices, so it’s a nice touch here.

The app is colorful and quite good fun, also being easy to read and navigate. iFit also offer a subscription for a personalized coaching plan, exclusive daily workouts and recipe videos. Eating healthily, surprisingly is an often neglected part of keeping fit, so to have it built in to a fitness tracker is great. 3 sizes of wrist strap mean you should find one to fit perfectly.

The Polar A370 is great looking thing, and that is partly down to the display. Full color and displaying not just a heart rate but also the zones make it really useful. If you don’t know, your heart rate at any given time indicates what your body is doing. As part of that, there’s a cardio zone as well as a fat burning zone and more. This makes the Polar display incredibly useful, having that information available at a glance.

Most of the data you will need is available right on the tracker display at the push of a button. The excellent app is good for viewing archived data, but all your current stats are immediately available. When you’re having a lazy day, the Polar A370 will also give you a metaphorical nudge to get up and do a bit of exercise. This is an excellent feature for those with less active jobs.

Amongst the cheaper fitness trackers, the Fourfit nevertheless has a host of features usually found on much more expensive models. As well as having heart rate and blood pressure monitors, the Fourfit will also work without your phone being nearby, and so you can leave it at home or in your locker when at the gym. The Fourfit will automatically sync with your phone when back in range. You do need your phone for tracking runs, however, as it requires GPRS positioning. 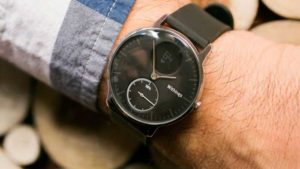 Even so, when you factor in sleep tracking and even fatigue measurement, this is a lot of tracker for very little money. You will also get 5 days life from a single charge, which is above average and quite impressive.

Nokia have long been innovators and, despite their troubles with their smartphone range in recent years, are still at the forefront of design. The Steel HR deliberately sets out to not look like a fitness tracker. Instead, looking like a watch is the order of the day, and it is aimed at those who might be conscious about how a fitness tracker looks on the wrist.

The display can be changed using the single button on the Steel HR, to show heart rate, steps, distance, alarms and batter status. There’s a percentage indicator on the face which shows your progress towards your daily target. The Steel HR isn’t as feature laden as some trackers costing a similar amount but, for those who want a little more class on their wrist, it looks impressive. 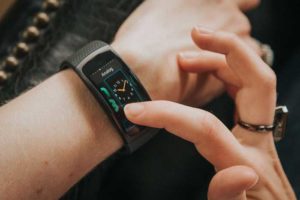 As one of the biggest names in technology, it”s no surprise that Samsung have a couple of fitness tracking devices available. The Fit 2 Pro is at the pricier end of things, but you do get a premium product with lots of features. What makes the Fit 2 Pro a little different is that it uses widgets to construct your personal screen layout. These are available from both app stores, with several from Samsung themselves. There are also around 3000 other apps/widgets compatible with the Fit 2 Pro, some better than others.

heart rate, steps, distance etc. are all available for monitoring, and the main app works very well on both OS, which make sit appealing to both Apple and Android users.  The Fit 2 Pro just about manages to stay the right side of fitness tracking, without creeping into smartwatch territory. But only just. The shEer number of widgets available mean you can soon overcrowd the device display, but at least you get to make that choice yourself.

A premium device, at a premium price, but an excellent one nonetheless.