Selfie sticks are, depending on your point of view, either the single most useful thing in the smartphone market today, or basically a stick with a camera on one end and a fool on the other. However, whatever your view, there’s no doubt that selfie stick technology has come a long way. Here we take a look at some of the best available in 2017, each bringing their own unique take on what a selfie stick should be.

Sadly, since Apple decided to do away with the earphone jack on later iPhones, the JETech isn’t quite so “universal” as it was. But that doesn’t stop the use of the 3.5mm jack being the best way to use a selfie stick. JETech sure does it better than most.

This selfie stick is geared to hold smartphones from 2.4” to 3.3” wide. In addition, it can be used with a simple setting in the camera shutter settings in Android or via a free iOS app. The JETech 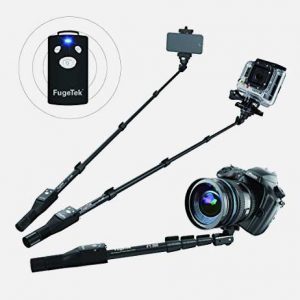 also folds down to just 7.4” long when not in use and extends to nearly 29” at full length. The that it uses the earphone jack means no Bluetooth and therefore no charging necessary. For the price, the JETech is a no-brainer as one of the best choices for a selfie-stick.

The Fugetek is more expensive than most selfie sticks, but partly because you get twice as much stick for your money. It has everything you need to take selfies. As well as having two different attachments for smaller and larger smartphones, it is also sturdy enough to take a (albeit on the lighter side) dSLR body/lens combination. Not only that, but the Fugetek extends to an incredible 49”, or just over 4 feet. Add a couple of feet from your arm, and you have a 6 feet reach which is incredible.

You can take pictures with it via Bluetooth and there’s even a mirror attachment to help frame the shot. So you can use the full power of the rear camera on your phone if you wish. If you are using an Android phone, you can even zoom the picture in and out. This feature isn’t available on iPhones due to restrictions of the iOS operating system. But it still doesn’t stop the Fugetek being a great choice whatever your smartphone model.

Sometime, simple is all you need, and the Mpow is as simple as even selfie sticks come. The U-shape head holds the phone very securely. Many devices use the twist style of extending the stick yet that occasionally has the habit of loosening on its own. Therefore, the Mpow uses the car-antenna principle of a simple pull-out method.

The Mpow extends to 32″, and yet is barely 7” long when retracted. This makes it one of the longest and shortest selfie sticks available. It is well made and very sturdy in both construction and use. There’s no question that the Mpow is a great choice for a no-nonsense selfie stick. 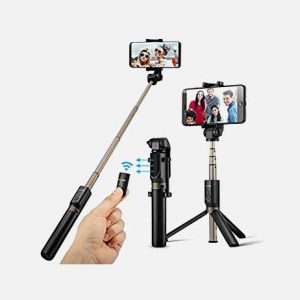 The Foneso 3-in-1 is one of the most ingenious selfie stick designs we’ve seen. As well as being a normal, Bluetooth triggered selfie stick that extends to nearly 33”. It can also be used as a tripod for either your smartphone or even a DSLR camera. Made almost entirely of aluminum and other metals the Foneso is among the strongest sticks available. Therefore it feels nice and solid in the hand.

The trigger is detachable, and uses a CR2032 battery. Which is great, as there is no need to recharge a fixed battery in the handle as on most Bluetooth selfie sticks. Although this may seem a step backwards, the batteries are widely available so you will likely be able to buy one locally if out and about and you need power in a hurry.

The versatility and solid design of the Foneso gets a big thumbs up from us. It is worth the few extra dollars it costs if you want the flexibility of a tripod as well as a selfie stick. 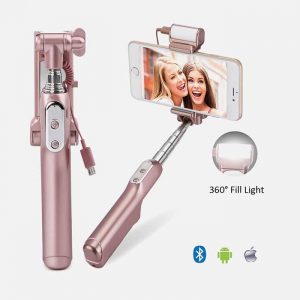 The Mocreo goes that little bit further to be helpful when it comes to selfie taking. It is quite compact at 7.3” while retracted and 34.6” when extended. The makers have smartly added a mirror attachment to allow the use of the (usually much better) rear camera from suitably equipped smartphones.

Not only that, but as most smartphones still don’t have a front flash, they have included a light into the design to help improve selfies taken in dark conditions. The light actually works remarkably well. It is significantly more effective than the standard front light method of activating a white screen on the phone at full brightness.

Unusually, but also very welcome, is that the Mocreo can take smartphones up to 6” wide. The owners of an iPhone Plus or a Galaxy Note are no longer excluded from taking selfies. This selfie stick is made of a polycarbonate material, so the stick itself is very light. When using it with a larger device on the end of it at full arm stretch., such a feature proves crucial.

What Is a Kosher Mobile Internet Filter?