Our 7 Tips After The Dip

Actually, “water-damaged” may be too strong a term, as many smartphones can be quite easily recovered if they have been submerged in water. Here are 7 things you should (and shouldn’t do) if your phone ends up underwater.

Don’t, whatever you do, be tempted to touch anything that might make the phone respond in any way. Don’t turn it on, don’t wake it up, don’t touch the screen, the home button, the volume or anything else. In short, just leave it exactly as it is. Except fish it out of the water, naturally.

The reason is that every single thing a smartphone does generates a current of electricity, and water is one of the best conductors of electricity there is. The slightest spark will shoot to the incredibly sensitive components of your phone and fry it right there and then. There’ll probably be no loud pop or puff of smoke, but it’ll be fried nonetheless.

The only exception to this, and this is also a massive risk, is to turn your phone off and hope for the best. We’re going to stick our neck out here, and say you’ve got half a dozen apps all giving notifications of one kind or another, including email, text and even calls. Every one of those notifications generate a current as the various components do their thing, so it’s better to gamble on one action than play the lottery with dozens or hundreds.

Don’t shake the phone to try and get the water out. All you’ll do is spread it around even more. Most smartphones, while not watertight (unless they comply with the IP68 water/dustproof standard), aren’t exactly full of wide open gaps around the case either, so the water won’t come out anywhere near as easily as it went in.

3 – Heat Can Melt The Components

Don’t be tempted to accelerate the drying process by applying heat. Some sources tell you to put the phone in a cool oven, but this can have disastrous consequences. However low the heat may appear to be, the fact is that both water and your phones components do not handle heat very well and can cause permanent damage. In normal use, your phone has elements of cooling built in to prevent overheating, but this won’t happen if you treat it like a soufflé.

If possible, do remove the back cover of the phone. This is usually only possible if the phone has a user-removable battery. Don’t be tempted to take the whole phone apart, as any warranty will immediately be voided. If you can remove the back case, gently remove the battery, SIM card and MicroSD card.

Either with the back case on or off, gently pat the bits of the phone you can see with kitchen towel or other absorbent, lint-free cloth. Don’t rub or try to dig into the nooks and crannies, just pat down what you can see to remove the excess water.

Get a ziplock or other seal-able, airtight bag and fill it with white rice. Rice is a fantastic absorbent of moisture, as can be seen just when boiling in a pan. It also doesn’t need heat to do it’s job. Make sure there’s enough rice to cover the phone, and seal the bag tight.

An alternative is to use silica gel packets like you see in the box when you buy electrical items. They are fabulous at taking humidity out of the air, and will do the same for your smartphone. Of course, you didn’t think ahead to this point and will now be mentally checking off how many you’ve simply thrown away over the years. Our advice is to start collecting them sooner rather than later, as this will happen again. The beauty of silicon gel packets is that they are reusable simply by drying them in a warm oven for a short time.

6 – Wait and Wait Some More

Now comes the bit where you will need more patience than your smartphone has ever let you have before. 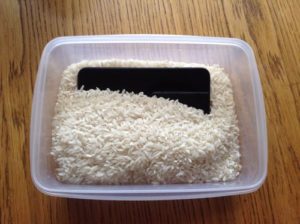 Whether using rice or silica, you need to put the bag somewhere safe and resist touching it for at least 2 days, preferably 3. If you get tempted to check whether the phone is working after a few hours, you may as well kiss it goodbye before you go to any of the trouble in this list, as it won’t dry so quickly.

After 2 (or 3!) days, take the phone out, and turn it on. If you’re lucky, it’ll start up like nothing has happened. If it does, check the speaker, headphone socket, charging socket, volume or other buttons to make sure they all work. Use the phone as normal for a couple of hours to make sure everything else is working properly. Wi-Fi, GPS, Bluetooth, the display and just about everything else has it’s own collection of hardware parts, so don’t assume they will all work just because the battery is able to push power to the processor.

If it doesn’t turn on, try charging it. If it still doesn’t work, you don’t really have many options left, unfortunately. You could try a new battery, if it’s replaceable, but not much more.

Call the insurance company. You do have insurance, right?