It might seem counter intuitive to compare an older model of a mobile phone to a newer version of the same thing, but there’s a lot to consider. For example, the older phone is likely to be cheaper,
and it’s possible the newer release may have issues that were introduced. It may also just be that the newer model has stuff that people just don’t need, so why pay for them?

With that in mind, then, we take a look at two of Samsung’s best flip top phones ever, the Samsung Rugby 3 and Samsung Rugby 4. We will try and offer some advice on what will be right for you. First, here are some at-a-glance stats and figures. 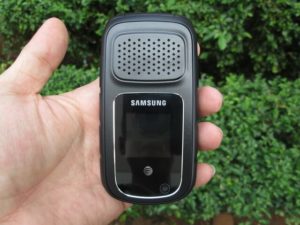 In purely technical terms, there isn’t a massive difference between the two phones, but one or two points may be enough to make a difference.

Neither Samsung nor Intel provide a clock speed for the XMM6230 processor in the Rugby 4, but we can at least assume it’s much more efficient on power management simply because of the quite significant difference in the battery performance.

The cameras are identical, as is the network access both phones offer. The display is also identical in both, and both offer a MicroSD card slot for up to 32GB of storage. It should be noted that neither phone offers anything in the way of usable internal storage, so you will need to factor in the cost of a MicroSD card if you play to carry audio files around with you or want to take more than a handful of photos.

Probably the biggest upgrade the Rugby 4 has over the 3 is the introduction of Wi-Fi into the specs. In today’s world, we all take Wi-Fi for granted, and so this makes the Rugby 4 a decent proposition if you like to browse in coffee shops or even at work.

Being a little bit chunkier all  around, it’s probably no surprise that the Rugby 4 is quite a bit heavier than the 3, half an ounce, in fact, which may not sound a lot but can feel surprisingly heavy in a shirt pocket.

Both devices comply with IP67 for water and dust resistance, with extra protection by way of compliance with the Military Standard 810G. Really, this should be no surprise as the Rugby range is designed to be rugged and certainly much tougher than  many modern smartphones.

Wi-fi has to be a consideration if you have a need for it but, otherwise, there’s little that would cause us to recommend one over the other. The slightly smaller and lighter Rugby 3 is a very capable phone, lack of Wi-Fi aside, and the difference in battery life really shouldn’t concern you given that neither of these phones are designed to run power-hungry apps or play hi-res videos.

The inclusion of Wi-Fi makes the slightly higher price of the Rugby 4 with the extra investment but, that aside, you can’t go wrong with either of these great little devices.