Samsung are the kings of the Android smartphone market, no question. It’s true that some makers have started to eat away at the Korean giant’s share of that market, but it will be some time before Samsung fails to lead the way.

A big part of their success has been the Galaxy S range. The flagship smartphone has long been the benchmark for other manufacturers to catch up with. It’s probably fair to say that, up until the S5, the series was part great and part a little bit average, with not everything going according to plan. From the Galaxy S5 onward, though, Samsung has proved its worth as the Android leaders. New features, massively improved spec upgrades, and just a better all round experience has impressed reviewers and users, alike.

The S7 took things a step further again, and the Edge variant added a massive new dimension to how a smartphone display is designed and used. To see how well the Galaxy S7 Edge stacks up today, we asked our reviews team to run it through its paces. You can see what they thought below.

You can get the Samsung Galaxy S7 Edge for just $479, brand new and fully unlocked. 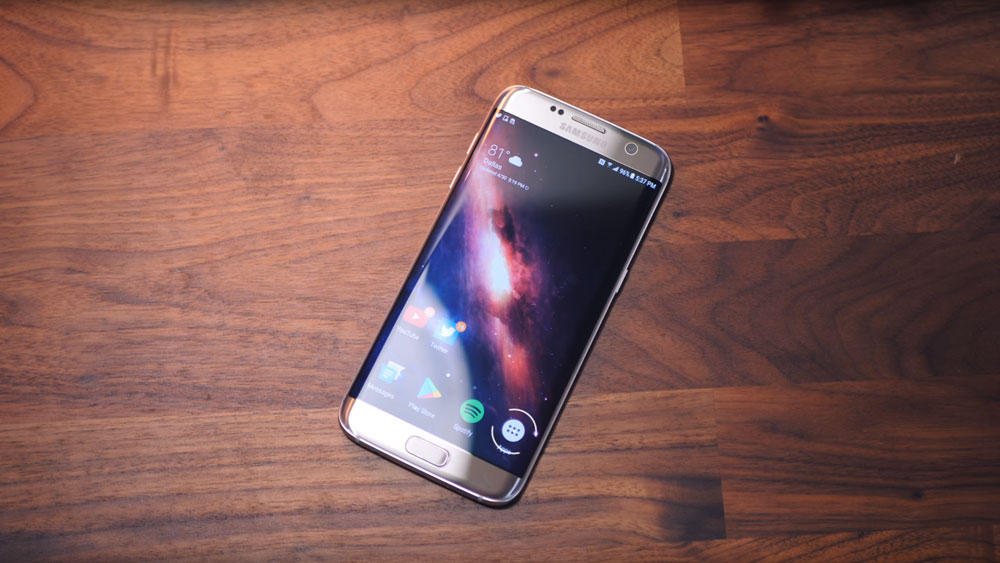 Inevitably, the S7 Edge has far more in common with the standard S7 than not. We’ll take a look at exactly what is the same and what is different later. On its own, the Galaxy S7 Edge is something of a triumph for Samsung. The edge to edge display, hence the name, promises to dazzle users with a high quality, high resolution experience, whether gaming, watching movies or just jumping around the web.

The specs show the S7 Edge to be a cut above, and our team agreed. They gave the Galaxy S7 Edge an overall score of 4.7/5. This is broken down into the categories below:

So, as you can see, the big talk from Samsung seems to be largely justified. The S7 Edge really does feel like a watershed moment for smartphone design. The leaps taken here will undoubtedly eventually filter down not just to Samsung mid-range devices, but to the market generally. 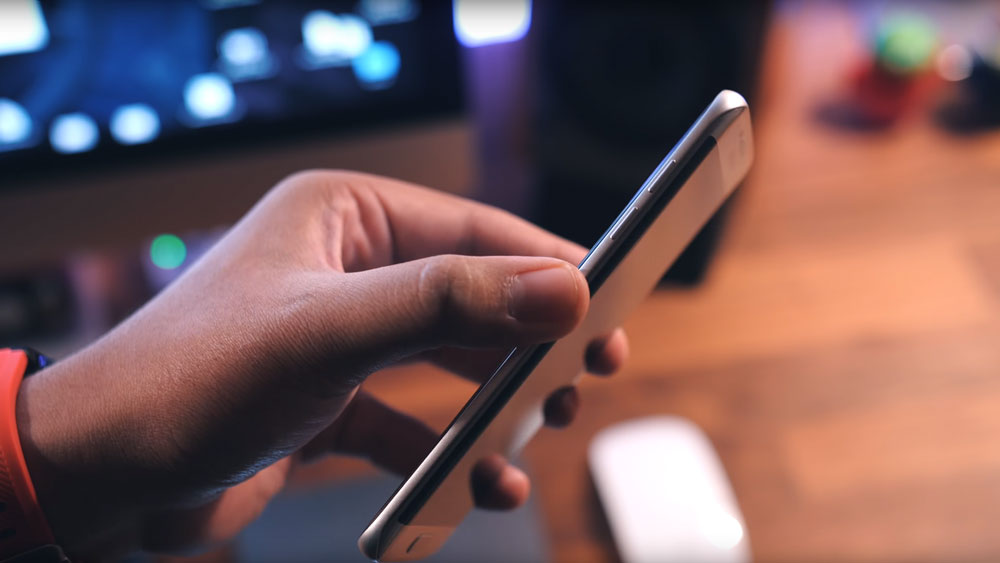 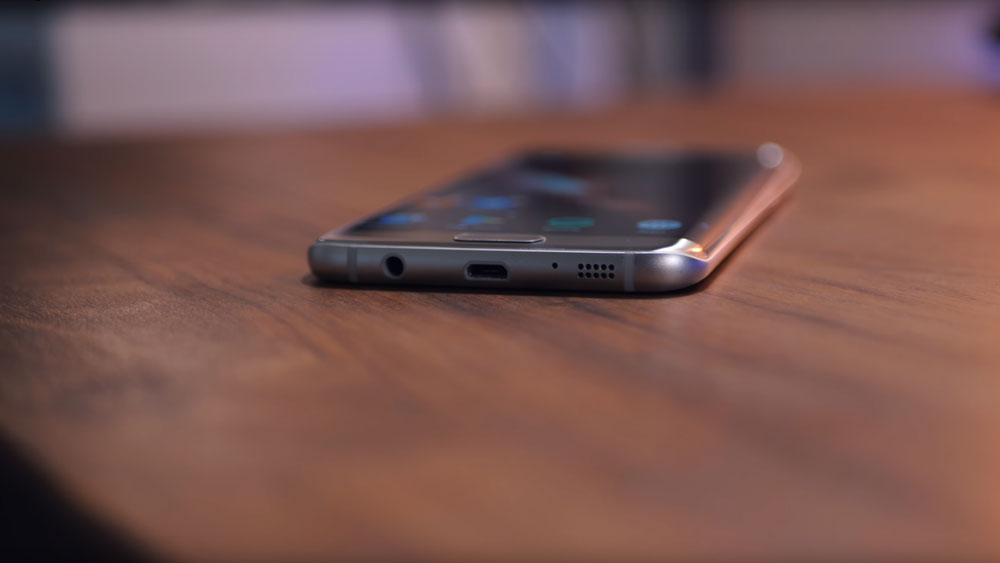 Let’s be honest, most smartphone designs stopped being sexy years ago. Once we got to the standard slimline, narrow bezel front face, everyone just settled in for the long haul. Then came the Edge and similar devices. Suddenly, we had displays going to the very edge of the front case and wrapping round to meet the back case. The extra half inch, or so, of display size sounds minimal, but the actual visual effect is amazing, Not only does the phone itself look much nicer, sleeker and, yes, sexier, but the display itself is lovely to use.

Our fear, with the S7 Edge was that it might feel a little fragile. After all, all that glass means more chance of it shattering. And yet, the phone feels incredibly solid without being especially heavy. The curved back keeps the S7 Edge nicely settled in the hand, and the buttons are right where you’d want them to be. The inclusion of IP68 water and dust protection is also very welcome. The S7 Edge is a true step up in design and build quality. 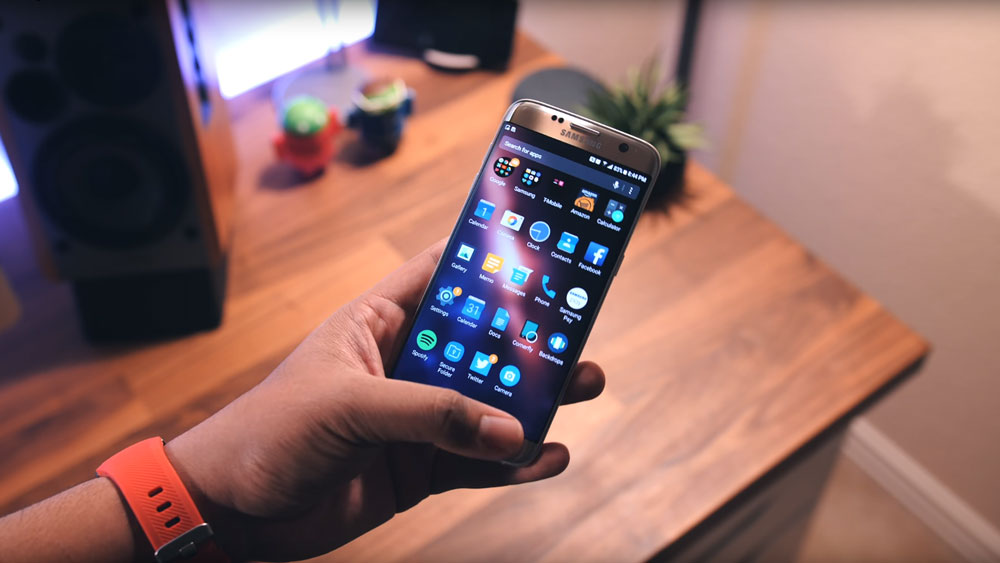 It’s hard to actually say how good the Edge display looks in every single sense. It looks great in design and build, and the quality is just sensational. A 5.5″, Quad HD display might well have been enough on its own but, when you pair it with Samsung’s Super AMOLED approach it just starts to sing. We can honestly say we’ve never seen a better display on any smartphone. 4K displays offer little, if any, improvement over the S7 Edge. Colors and contrast are exceptional, viewing angles are greatly improved, and the overall feeling is simply one of excellence.

Many hours of use with movies and gaming in particular, left no feeling of fatigue. In fact, the only issue we had with the display at all was our tendency to grab the S7 Edge as we would any other, which left finger smears on the display itself. That, though, says more about us than the phone. 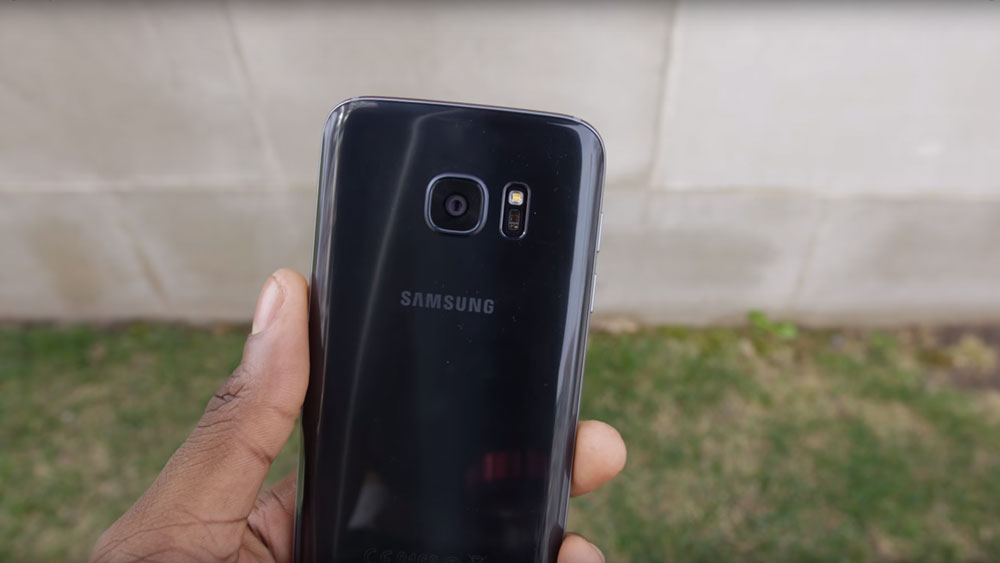 Another of Samsung’s lauded features is the quality of the cameras they install in their phones. At first, it seems curious that they have dropped the pixel count slightly in the S7 Edge, to 12MP, but with good reason. The quality from the new camera surpasses all that has come before, especially in low light. A lack of light will kill the quality on any smartphone image, but the S7 Edge handles it all really well, maintaining detail and sharpness beyond anything else we’ve seen.

If you are serious about photography, but don’t want to lug a real camera with you everywhere you go, then the S7 Edge gets you closer to the dSLR experience than any smartphone ever has. Crucially, you can shoot in RAW. Usually, any phone or compact camera will process the pictures you take before it gets as far as appearing on screen. This means you get the image as the manufacturer wants you to see it. With RAW images, you effectively get a digital negative, with no processing whatsoever. This means you can use Photoshop or other editing software to make the image look how you want it to, and not Samsung.

But, if you choose to have the camera do the work, you will get colorful, punchy and ultra sharp images. The autofocus is instant, and image stabilization keeps everything nice and steady on your behalf. The rear camera can capture 4K video, and the front camera 1440p Quad HD video. There’s no LED flash on the front camera, but the screen illuminates to provide enough light for selfies in even the darkest room. 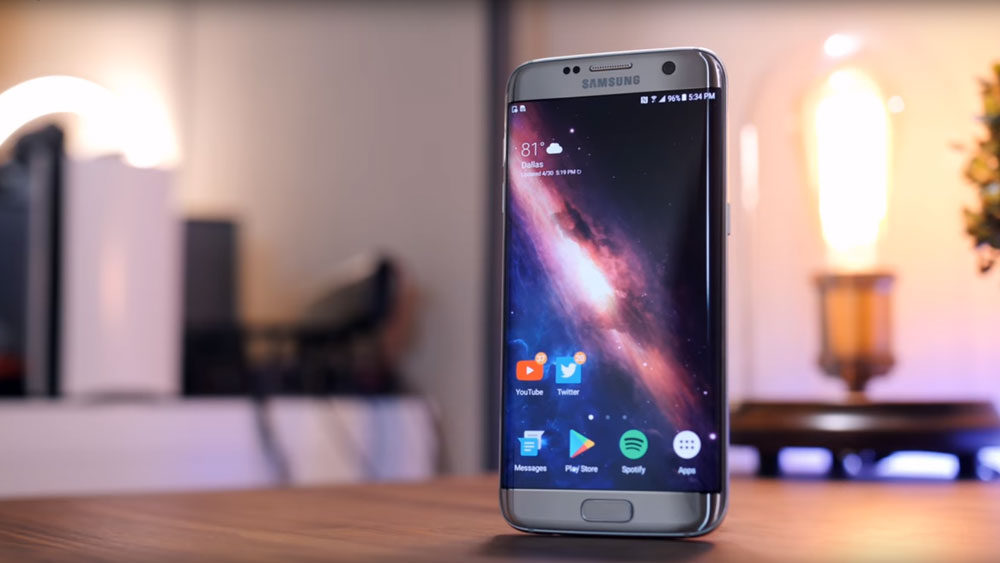 Samsung have, for several years, used their own TouchWiz to present their own version of Android to users. For a few years, they packed it with appalling apps of their own in order to try and add some value to proceedings. Fortunately these days they tend to stick to apps which are, mostly, useful. As many manufacturers now do, Samsung have focused the apps around health and staying fit. The apps they provide are also pretty good at what they do.

The very edge of the S7 Edge display has a special dock are which is revealed by running your finger along the phone edge. This dock, actually called “the edge”, lets you put info widgets in of your choosing, as well as commonly used features and apps. We were skeptical at first, but it’s actually terrifically useful. However, the serious software stuff really kicks in for those who like using their smartphones for gaming.

Samsung have included a special Game Launcher. As well as collating your games in one place, you have several new options available before you start. You can mute notifications and alerts, and adjust gaming settings to save battery. The cherry on top, though, is that ability to record your gameplay without a 3rd party app. 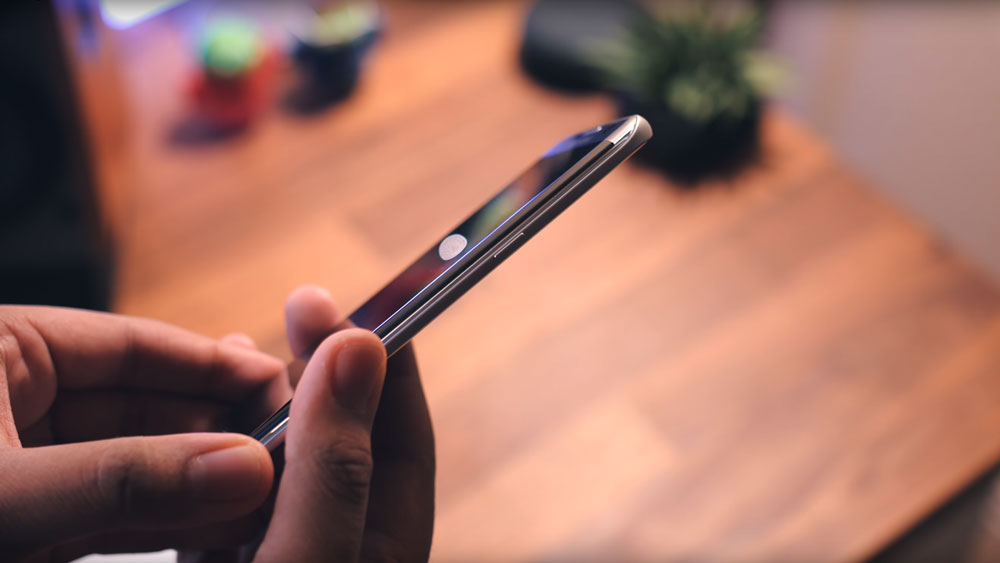 The gaming improvements mentioned above do come at a cost. Gaming is notoriously heavy on both processor and battery life. Fortunately, the quad core CPU has sufficient oomph to avoid any stutter or lag, even with online gaming. And the battery is a huge 3600 mAh which will charge from dead to full in just 100 minutes. Wireless charging is also built right in without the need for wireless sleeves or other nonsense.

Another big improvement in the S7 Edge is the audio quality. For too long, manufacturers have based their music credentials on how many songs the phone can store, but that’s just not enough any more. As well as  using high end audio components to produce real improvements in quality with the default settings, Samsung go further. There is a small utility to test the extent of the frequencies you can hear, which then tailors the mix of the audio to suit. The difference from the default is quite remarkable. This is a particular help for older users, as our ears lose access to higher frequencies as we go through life. It’s a nice, and very welcome touch.

You get 32 GB of internal storage, and a Micro SD card slot for a further 512 GB if you need it. The fingerprint sensor is sensibly placed on the front, instead of the rear case, and reacts almost instantly. 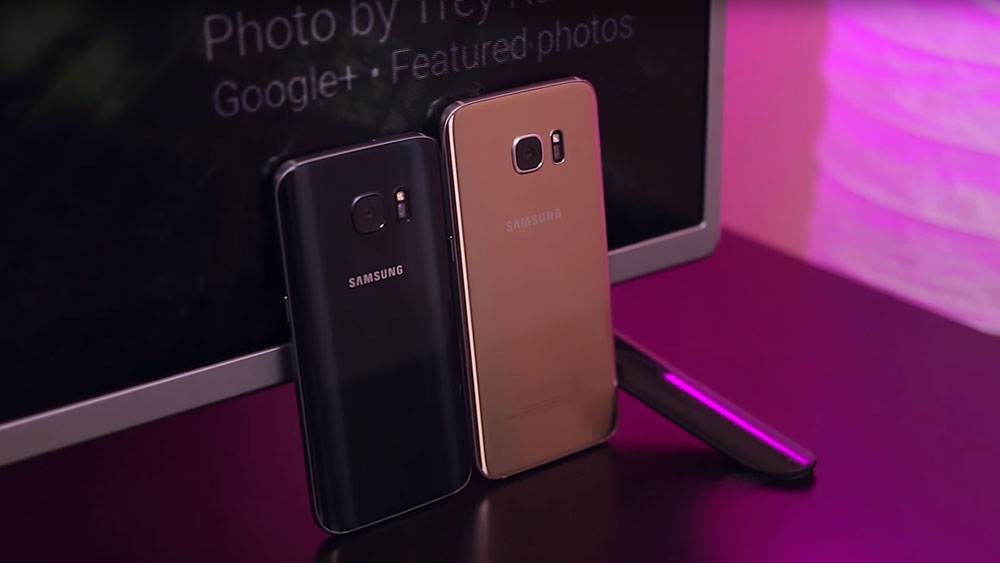 As you’d expect, much of the internal hardware is the same, but there are differences. Size, is the most obvious difference. The S7 Edge is slightly bigger in height and width, but only by fractions of an inch. And yet, the S7 Edge also manages to be marginally slimmer. The battery of the S7 Edge is 3600 mAh, compared to the 3000 mAh of the S7. Part of the reason for the bigger battery, which makes the slimness of the S7 Edge even more remarkable, is the bigger display.

The 5.1″ of the S7 and the 5.5″ of the edge is actually a bigger difference than it sounds. The S7 Edge display just looks better and feels better in use. Not that the S7 display isn’t great, it truly is, but the Edge is just a better experience.

Otherwise, everything you read about the Edge, you can apply to the S7. Both are outstanding smartphones packed with features and quality. The $479 price tag of the Galaxy S7 Edge is actually not much different to the standard S7 but, oh, that curved screen.

Should I Buy A New Smartphone Online or In Store?