We would like to say that smartphones are robust, durable devices which are built to last. Except they’re not. Or at least most of them aren’t. Occasionally, though, manufacturers will go the extra mile and create true rugged phones. Samsung, actually, have been doing it for years. They have an extensive range of rugged phones from flip-tops to flagship smartphones. Although there are other brands doing it as well as Samsung, few have committed to doing it for so long, and with such consistent results. That they make a rugged version of their very best phone is also an amazing thing to see.

And so, to see if the hot streak continues, we handed off the Galaxy S7 Active to our quite clumsy and irresponsible team of smartphone breakers. See what they thought below.

The Samsung Galaxy S7 Active is available for $599, brand new and fully unlocked from Mr Aberthon. 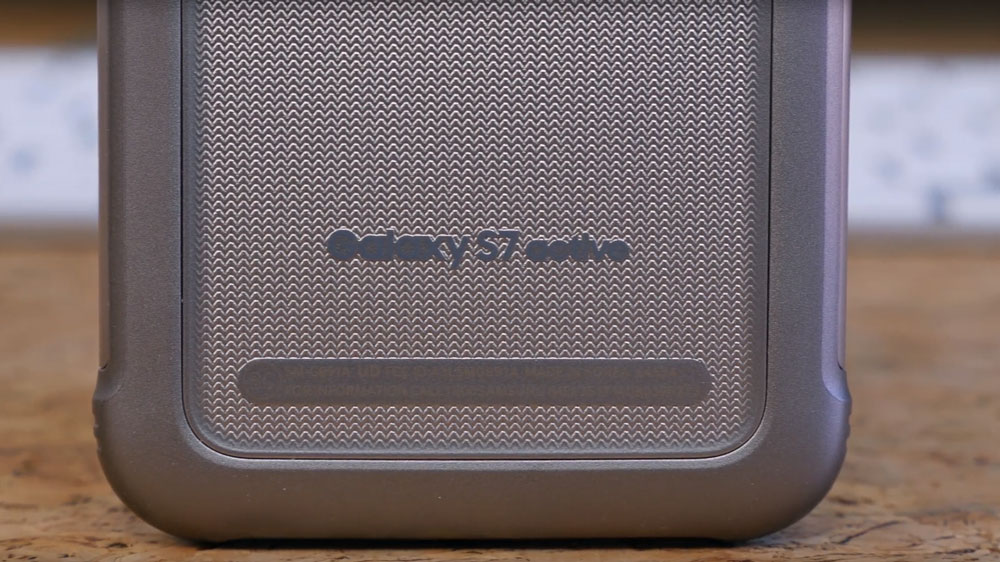 All models of the Active version of Samsung’s flagship smartphone range has, to date, had almost identical specs to the standard S equivalent. Some components do get changed out of necessity due to limits on space in the case when the rugged protection measures are in place. Another reason is that making a phone ultra durable can be costly. And so, some other components may need to have a slight downgrade in order to keep the eventual launch price controlled.

Not this time, though, Instead, Samsung made a bigger case and put the exact same components inside, except for one. They upped the battery from 3000mAh to 4000mAh. It’s hard to imagine that the S7 could be bettered, but we think it has. It is a little bulkier, obviously, and a little heavier, but it is still the Galaxy S7 underneath.

The Galaxy S7 Active really makes us wish all manufacturers would follow Samsung’s lead and make their smartphones even just a little less fragile.

Scores for the Galaxy S7 Active 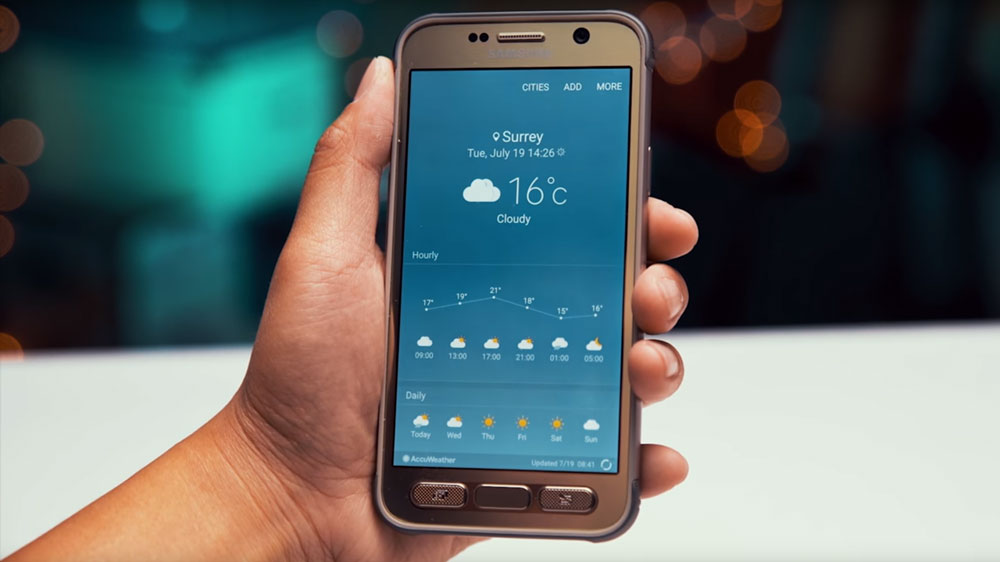 Our team of experts awarded the Galaxy S7 Active an overall score of 4.45/5. And they didn’t even break it. The overall score is an average of the scores for several categories thus:

The standard S7 is still one of the best phones Samsung have ever produced. Making it Active is absolutely no detriment to that fact. Yes, it’s a little bulkier, of course, but that’s the point. 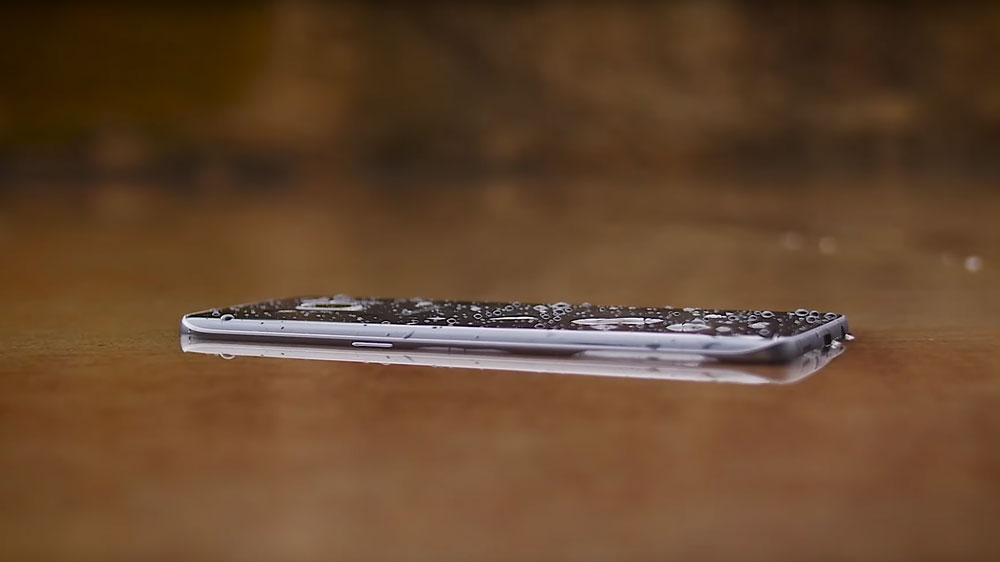 It’s really not the point of any rugged smartphone to look sexy. But, to be fair to Samsung, the S7 Active is a little more subtle than previous incarnations. The bumper corners have reduced somewhat over the years, for sure. But, there’s no getting away from the fact that the S7 Active is a little on the big side for a device with a 5.1″ display. But don’t be disheartened by a score of 4/5 for design. Not even the Cat S series would ever be worth a 4.5, and they are seriously good looking rugged phones.

But, whilst the S7 Active may lack a little finesse in the design, it really makes up for it in the build quality. Chief amost all is the fact that you still get 3 hardware buttons, as opposed to a hardware home button and touch back and recent button. Having three definite clicks to feel helps tons when wearing gloves.

Drop the S7 Active in 6 feet of water and it will survive for up to 30 minutes. Take it to the beach and sand won’t matter. Shake it, bend it, dip it in oil, take it from oven to freezer if you like. None of it will matter. With military grade protection, there’s every chance it’ll live longer than you will. The display, Samsung tell us, will survive a drop of 5 feet onto a hard, flat surface. Try that with any other phone, we dare you.

The S7 Active feels as solid as a rock. The extra grip from the corner bumpers also offsets some of the extra size you need to adjust to. It’s weird to say it, but it’s as strong as it is capable. Often, that isn’t the case at all, as one gets sacrificed for the other. 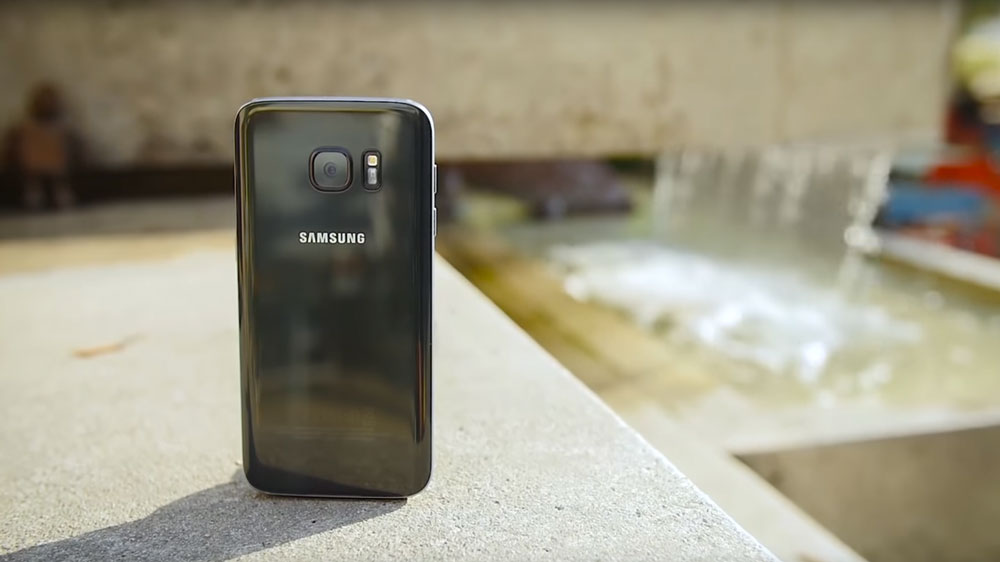 The 5.1″, Quad HD display is probably Samsung’s best ever outside its 4K screens. Bright sunlight is no match for the Super AMOLED construction, and a mindbogglingly high pixel density of 576 ppi means the image on screen looks sharp enough to cut steel. Colors are amazing and contrast is always perfect.

At no time, whether browsing images or watching movies, did we wish we had a better display. The only thing which stopped the display getting a perfect 10 isn’t even the fact that it’s not a 4K display. It’s that the S7 Active is a full quarter inch taller than the S7, and yet none of that space was used for a bigger display. we do get why, of course. If Samsung had added a bigger display, it wouldn’t have been the S7 Active, it would have been a new device altogether. And probably a more expensive one, at that.

Other manufacturers had already moved to 16MP when Samsung were putting the S7 Active together, but they chose to go with 12MP, and what a good decision that was. The biggest weakness of any smartphone camera is always low light performance. More pixels means smaller pixels. This, in turn, means less light per pixel. By restricting the pixel count, Samsung have made sure they get bigger than average pixels onto the sensor. They also have a lens with a maximum  f/1.7 aperture. This is seriously good in lens speak, as the lower the number the more light can get to the sensor in one go. It won’t match the output from a pro camera in low light, but it’ll beat any smartphone as a result.

In daylight, the images are just sensational. We’ve never really been convinced that any smartphone could take the place of a digital SLR but, unless you have a compelling reason to lug a big camera bag around, this gets close enough not to bother. The same goes for video recording. Not only can the rear camera capture 4K video, it can also record Full HD at 240 frames per second.

The front camera is a healthy 5MP. It’s not quite as good as the rear camera, they never are, but it’s good enough. There’s no 4K video, but Quad HD 2560 x 1440 px is readily available. There’s a “white screen” selfie flash that is a bit of a shock the first time you use it, it’s so bright.

For other manufacturers reading this, that’s how you get a 5/5. 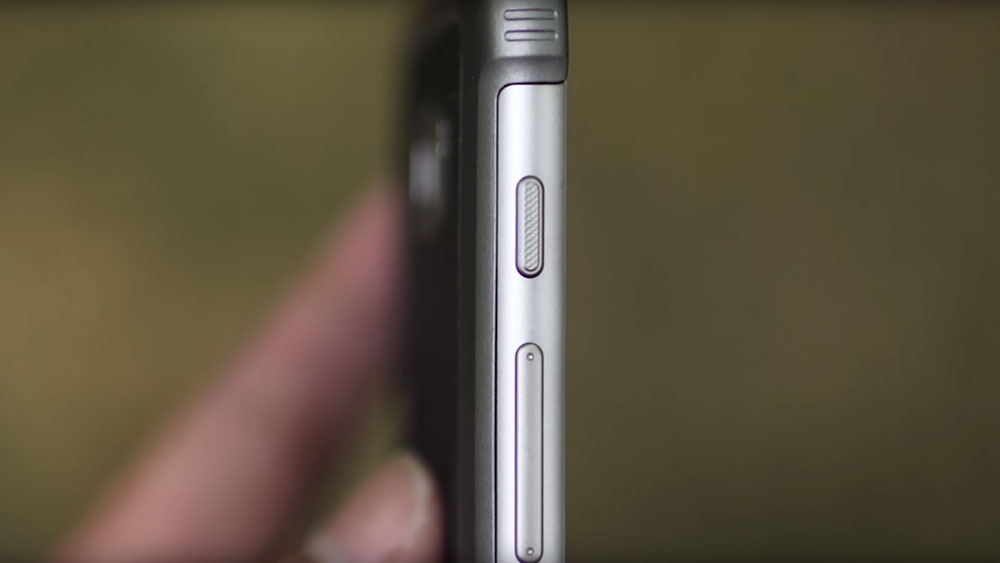 The rest of the hardware in the Galaxy S7 Active is actually pretty standard for a smartphone at this level. Dual band 802.11ac WiFi, Bluetooth 4.2, A-GPS, NFC and an FM Radio make up the package.

There’s 4G, of course, and you have both fast and wireless charging available. Not that you’ll need it quite so often. With normal use, we got 2 full days out of a single charge from the 4000 mAh battery.

You get a 32GB of internal storage, with a MicroSD card slot that will take another 200GB. 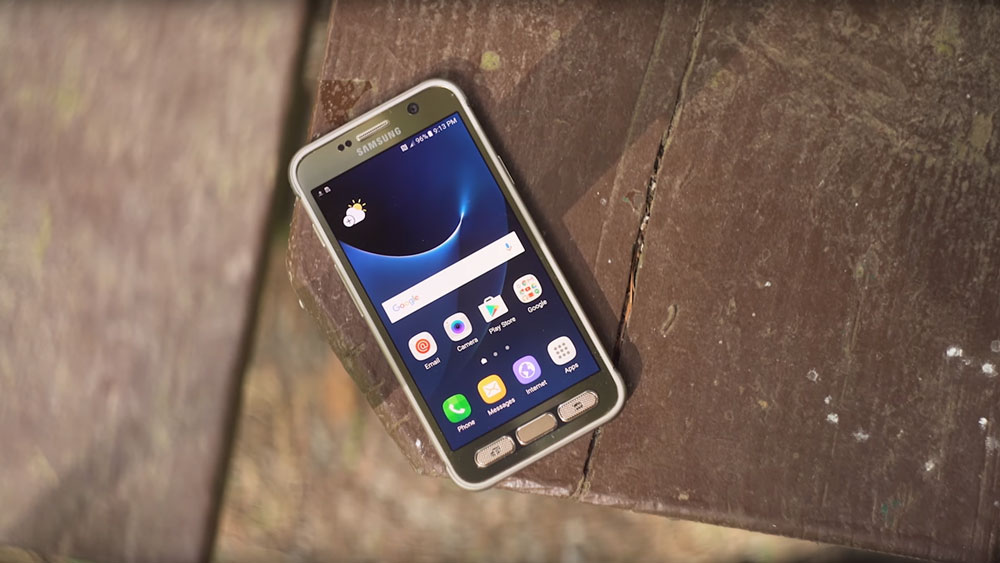 Samsung have refined their software inclusions over the years. You Still get a lot of stuff, and you might not need all of it, but more and more is useful. There are lots of health-related apps, and the camera app has everything from beginner to expert catered for.

The TouchWiz interface on top of Android is also better every year. It’s smooth and quick, with no discernible lag at all.

The S7 Active ships with Android 6 Marshmallow, but is fully up-gradable to Android 8 Oreo. This is great news and shows that there’s plenty of life in the S7 models.

The Samsung Galaxy S7 Active is, easily, one of the best smartphones available. Samsung may have added further component upgrades and the odd tweak with the S8 and S9, but the S7  is still capable of going up against either and standing its ground. Try saying that with an iPhone 6 against the iPhone X.

We can’t recommend the Galaxy S7 Active enough. If you don’t need the extra durability, then we apply the same recommendation to the standard Galaxy S7.