The Samsung Galaxy S range of smartphones is the flagship range of the biggest smartphone manufacturer in the world. The Galaxy S4, predecessor to the S5, has outsold every iPhone model apart from the iPhone 6/6 Plus. This made it a very hard act to follow. It is common for people to upgrade smartphones every 2 years, rather than every year. Indeed, so good was the S4, that it took the release of the Galaxy S7 to get close to the S4 sales figures.

The upside to this is that it means that there are good deals available for the Galaxy S5. As an example, the current cost of a brand new, fully unlocked Samsung Galaxy S5 at Mr Aberthon is $199.

The S5, although now 4 years old is still very much a flagship device. How much so, we asked our expert team to tell us. 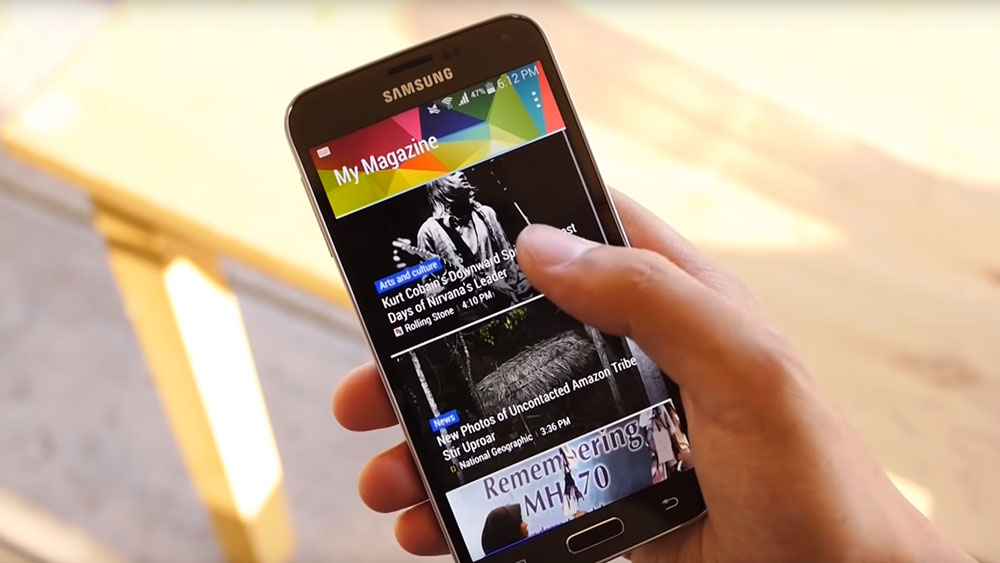 The Samsung Galaxy S4 was a triumph for Samsung. It showed the company to finally be a match for the innovation of Apple. The pressure was then on Samsung, of course, to repeat the feat. And repeat they did. A bigger display, more power, a bigger battery, better cameras, protection from water and dust and lots more heralded the coming of the S5.

At a time when 720p HD displays were common the S5, like the S4, had a 1080p Full HD display. This set it apart from the iPhone models of the time, which were still limping along with massively underwhelming resolutions. In fact, it wasn’t until the iPhone X that standard sized Apple smartphones reached the Full HD mark. The iPhone 6 Plus and later did have Full HD displays, but Apple persisted with lower resolutions for the standard lineup. This remarkable fact means that the S5 still graphically out performs any Apple non-Plus smartphone, apart from the iPhone X.

The Galaxy S5 also packs a punch with the rear camera. The first 16MP camera to find its way into a Samsung smartphone set the benchmark for image quality. The camera app also saw some significant improvement over the often complicated version on the S4.

Scores For The Samsung Galaxy S5 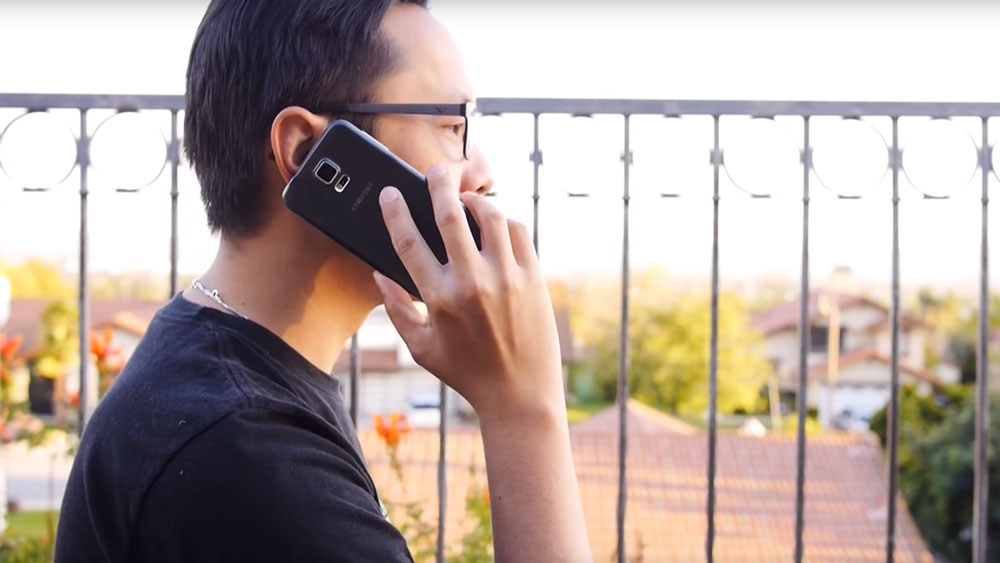 Our team produced an overall score for the Samsung Galaxy S5 of  4/5, which is a great result for a smartphone now over 4 years old. The scores are broken down as follows:

Generally, our team struggled to pick out any faults with the galaxy S5. The typical Samsung software hasn’t aged quite so well as it might, but everything else is still incredibly competitive. 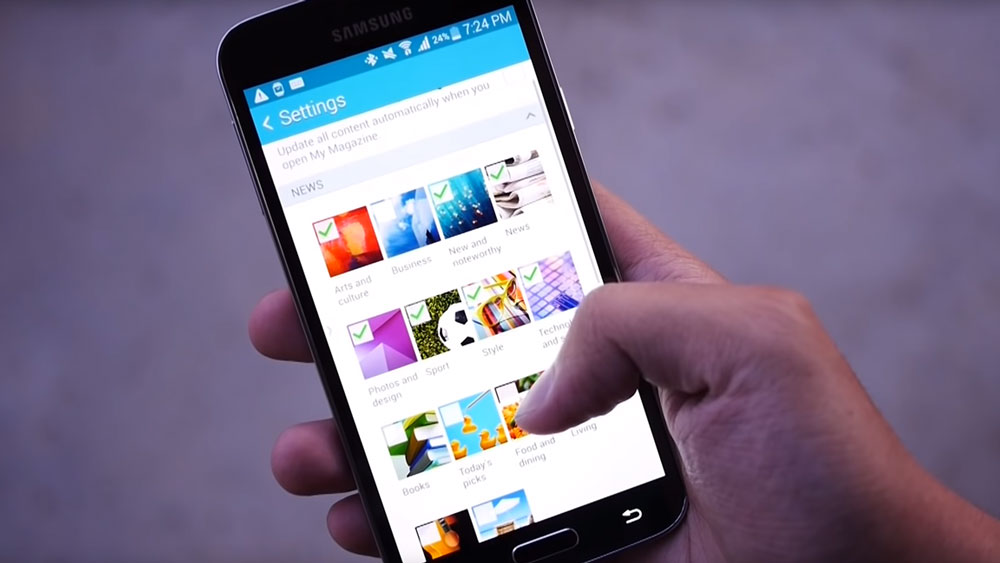 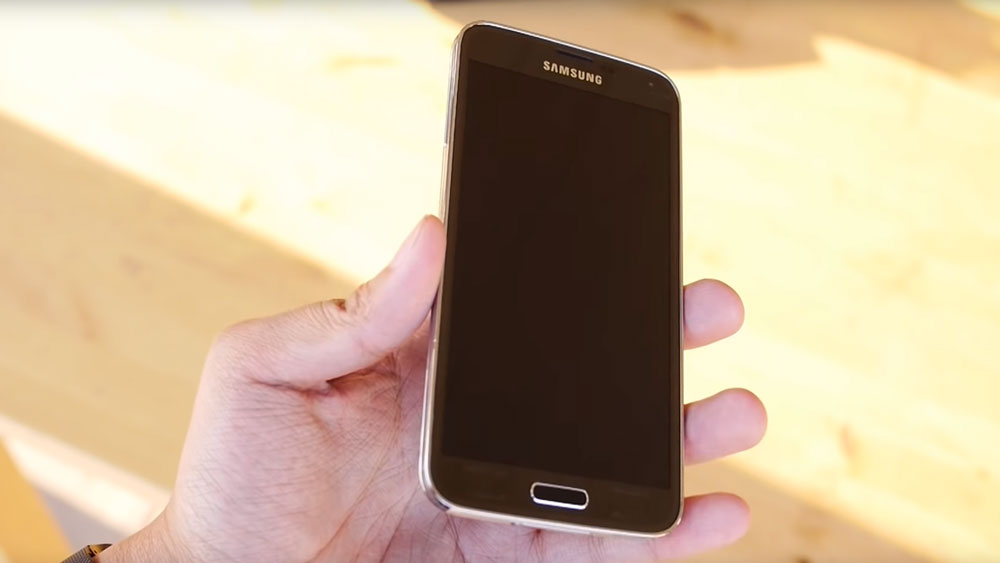 If you’re coming from the very smart metal and glass of an iPhone, even Samsung’s flagships can feel a little cheap. The plastic case of the Galaxy S5 could be a little nicer, but it doesn’t ever actually have a cheap feeling. However, there’s no getting away from the fact that it does look cheaper than its rivals. The perforated effect on the rear case is very grippy, with none of the bar of soap worries you have with a metal case. Nonetheless, despite looking okay, Samsung really should have done more to offer a true premium experience.

Aside from the case, there’s little new about the design of the S5. By this point, smartphones were evolving, rather than being truly revolutionary in any way. This means designs have tended to follow a pattern. Samsung are very keen on showing a path through the Galaxy S series and so, while the S5 is certainly better than the S4, there is still work to do.

The Galaxy S5 is the first Samsung S model to have some water and dust proofing. It is only IP67, rather than the now more common IP68, meaning dust protection and waterproofing for up to 30 minutes in 3 feet of water. Given that most water damage is caused when smartphones are dropped in pools or even toilets, IP67 should be enough. Assuming, of course, that the phone is recovered quickly.

A USB 3.0 connection was cutting edge in 2014, but is rather cumbersome today. The USB-B connector has turned out to be almost as proprietary as any of Apple’s ridiculous connector developments over the years. File transfer speed is good, but getting a spare cable isn’t as easy as you might think, and certainly not as cheap as even the new USB-C standard. 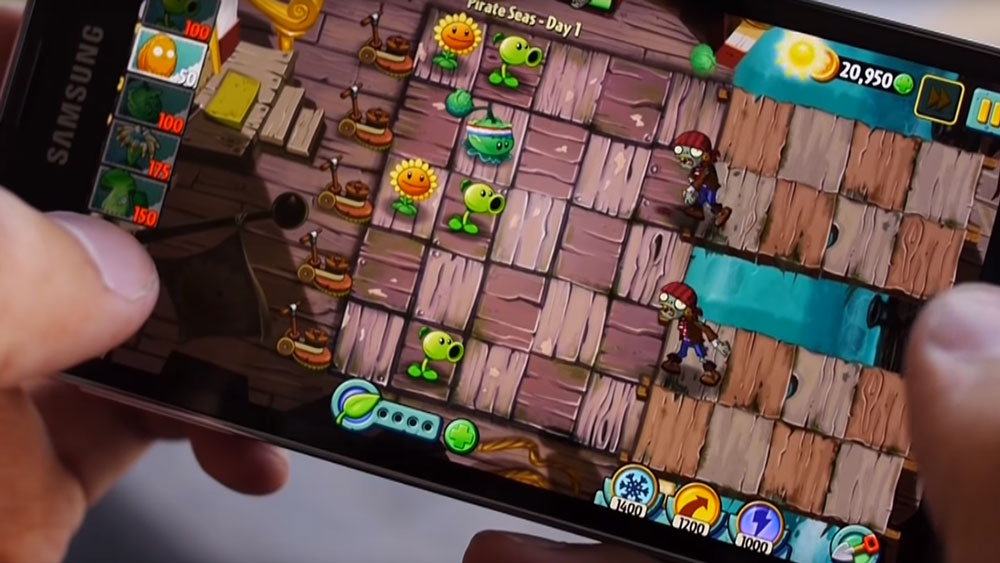 Samsung do lots of things well. You don’t get to be the biggest maker of tech products on the planet by not doing so. One thing which they are rarely beaten on is the displays in their smartphones. AMOLED have long been prized for their low power requirements and excellent color reproduction. The Super AMOLED displays now used by many smartphone manufacturers is actually a Samsung development of the standard for touchscreen displays.

Samsung also tweak the display settings internally to make punchy colors and excellent sharpness. The display of the Galaxy S5 demonstrates the technology amazingly well. Although “only” 1920 x 1080 px Full HD resolution, it’s easy to forget that it isn’t Quad HD or 4k. The display is really that good. On side by side comparisons, we were hard pushed to tell which was the Full HD and which was the 4K display.

At 5.1″, the display on the Galaxy S5 isn’t huge, but it is plenty big enough for everyday use. 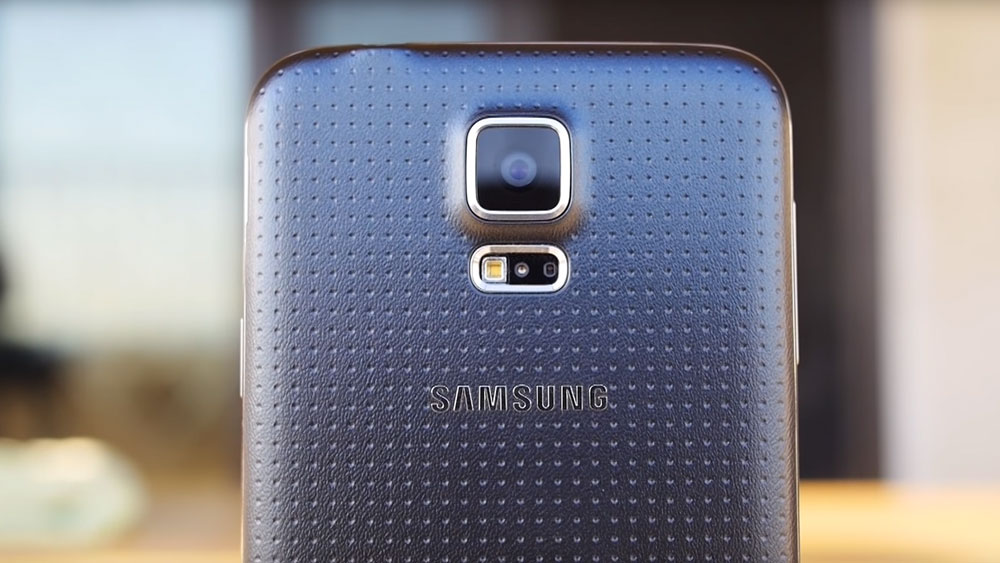 The 16MP rear camera on the galaxy S5 is an amazing bit of hardware. Image quality is excellent, and even video – so often a weakness in any smartphone, is incredible 4K quality. The camera app is a little slow to fire up, but is much easier to use than the app in the S4. Auto-focus is still among the fastest we’ve seen before or since and real-time HDR is an absolute boon. All smartphones incorporate an HDR mode into their apps, where several images at different exposures are combined into one “super” image. The S5, however, allows you to see HDR applied even before you take the shot. It’s a neat trick, which is also fast enough not to delay the taking of a picture.

Shutter reaction speed, the time from hitting the button to taking the picture, is adequate, without being exceptional. Later Samsung Galaxy S devices have become much quicker, and this is one of the few times the S5 shows its age.

The front camera isn’t the very best, at 2MP, but these were times when the front camera was strictly low-res selfies only. The quality is still good, and certainly good enough for social media. The front camera can capture video at 180 Full HD, and both cameras can be used simultaneously during a video call. 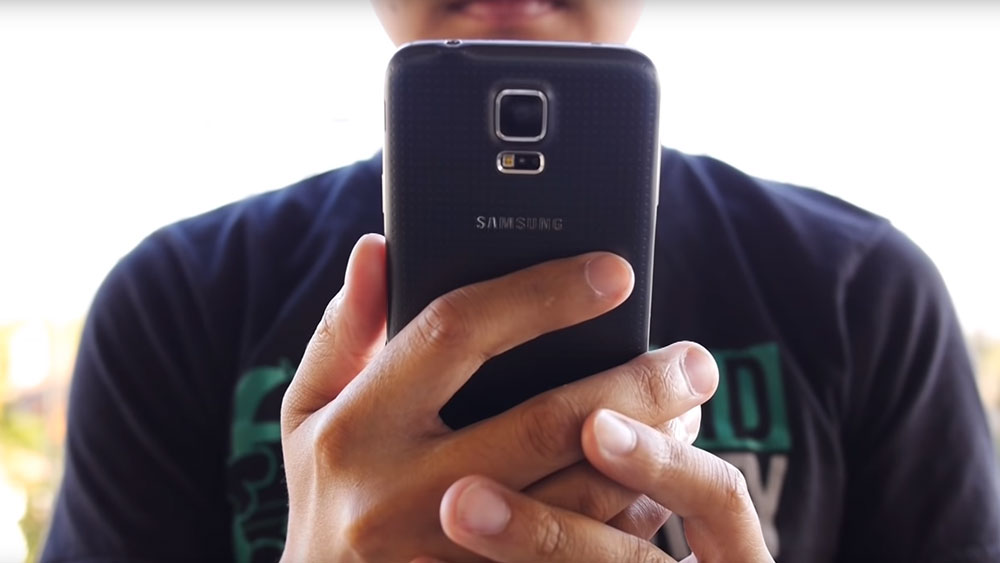 The overall performance of the Galaxy S5 is excellent. A quad core processor sounds a little lightweight for a flagship smartphone nowadays, but most run at 1.5 or 1.7 Ghz. The processor in the Galaxy S5 runs at 2.5 Ghz, which is a significant difference in raw power.

Benchmark tests show the Galaxy S5 to be somewhere between the iPhone 5S and iPhone 6 in performance terms. This is probably about right, given the comparable ages of all three phones. But, of course, benchmarks don’t tell the whole story. The S5 feels really sharp and zippy the vast majority of the time. The only lag we see is when opening the camera app. Otherwise, it all runs along rather nicely. 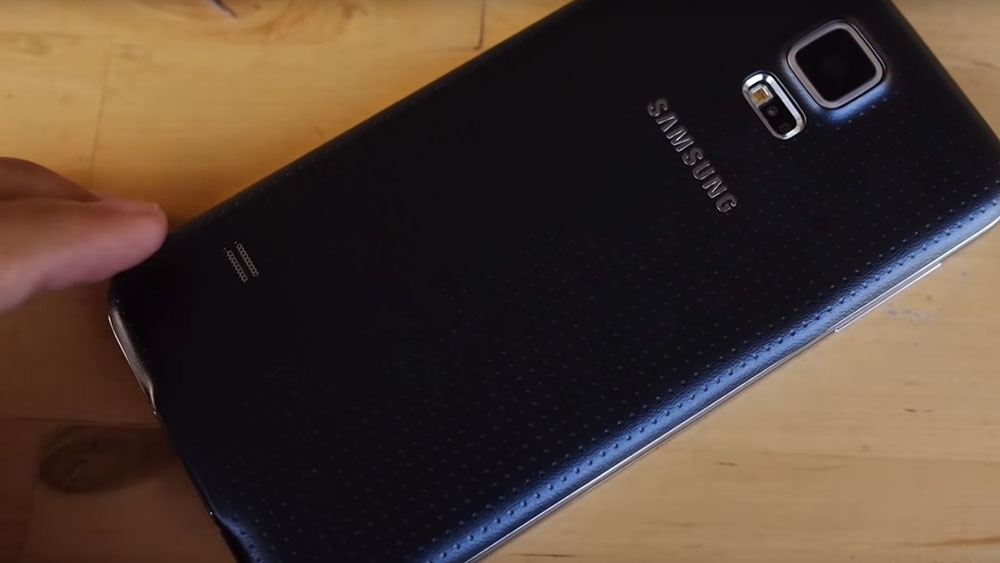 As with all smartphones, regardless of age, we see good and bad. Fortunately, the Galaxy S5 delivers far more of the former than the latter. The introduction of a fingerprint sensor is a real plus, especially as it is incorporated into the home button. None of the”somewhere on the back” nonsense we see with other models.

Dual-band 802.11 /b/g/n/ac Wi-Fi is also a massive boost for download speeds. As well as Bluetooth, GPS and NFC, there’s an infrared port. Originally, infrared was for the transferring of files between devices. Now, it is commonly used as a TV or other remote. Before you dismiss this an not needed, think about all the times you need the TV remote and it is across the room. Now, you can be even lazier than ever just by firing up the right app on your phone.

16 GB internal storage was par for the course at the time. Although not exactly stingy today, it’s not a huge amount. Fortunately there is a MicroSD card slot to take another 256 GB if you so choose.

The overall standard and specs of the hardware is still pretty relevant 4 years after release. 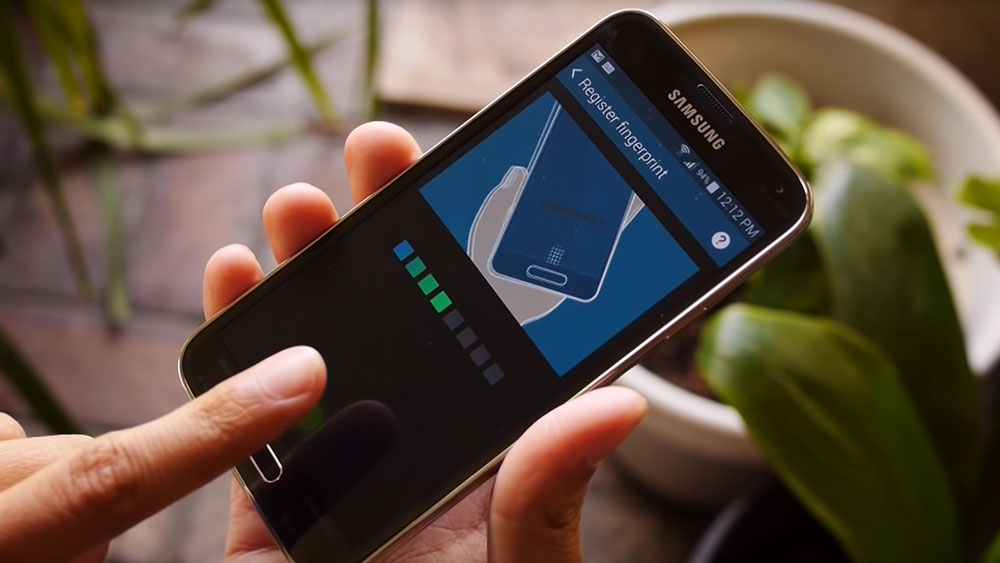 Samsung software always delights and infuriates in equal measure. The company have long used their own TouchWiz interface on top of the stock Android installation. As well as that, they’ve often packed a ton of apps onto all their devices. They’ve done the same with the Galaxy S5, sadly. Some of them are actually pretty useful, and there is a real emphasis on health-related apps. But, as always, we’d have preferred the option to not have them.

Android itself moves along nicely, slow camera app notwithstanding. Otherwise it’s pretty standard stuff. One of the irritations of Samsung is that they change the location of various settings every time they put a new phone out. You look for a particular setting, and it isn’t where it should be. Why they do this is anybody’s guess, but it is seriously annoying. Of course, once you get used to it, it’s not an issue, but it just seems so unnecessary. 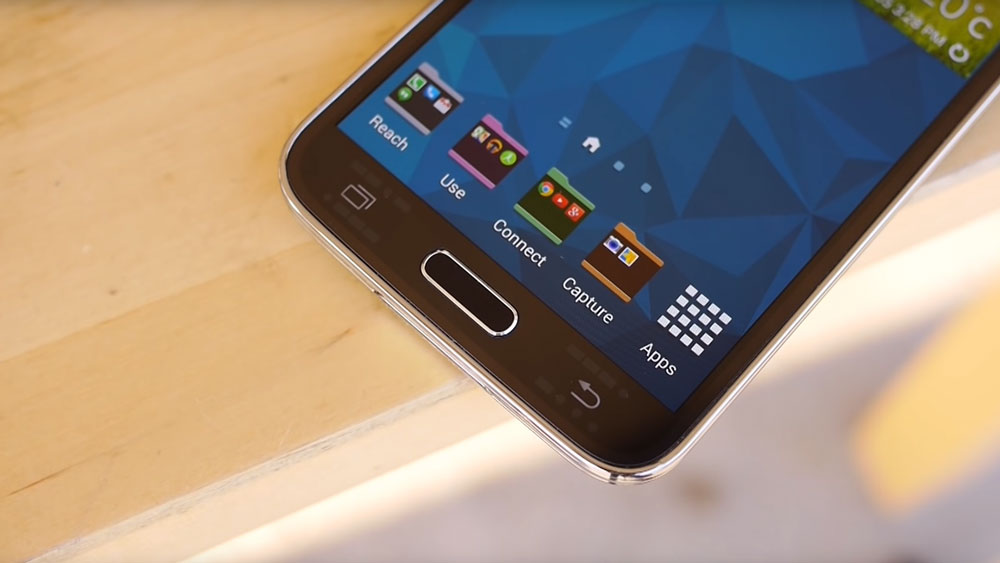 The Samsung Galaxy S5 is still, by anybody’s standards, a serious smartphone. It might not be the biggest hitter nowadays, but it’s good enough to knock it out of the park from time to time. It’s certainly good enough to get around the bases when it needs to. But enough baseball metaphors. The galaxy S5 is still an excellent choice for anybody wanting good, well above average performance, for well below the average flagship price.

It’s also a great introduction to anybody moving across from Apple of Windows devices who don’t want to have to break the bank to do so. To say you could do worse doesn’t really do the Galaxy S5 justice. You could do a lot worse, actually. And pay a lot more for the privilege.