The Galaxy series of Samsung smartphones actually has several incarnations. All budgets and requirements are catered for but, sitting at the very top of the pile is the Galaxy S. It took a while for a lot of smartphone manufacturers to wake up to what was needed at the top end of the market if they were going to rival the iPhone for people’s hearts and minds. Samsung were one of the first manufacturers to focus on a developing series of smartphones as opposed to a one-off device. It’s probably no coincidence that the Galaxy S series is the number one contender, with the iPhone, for the top spot.

Despite pressure from other far east brands like Huawei, vivo, HTC and others, Samsung has managed to maintain its edge as the leader. 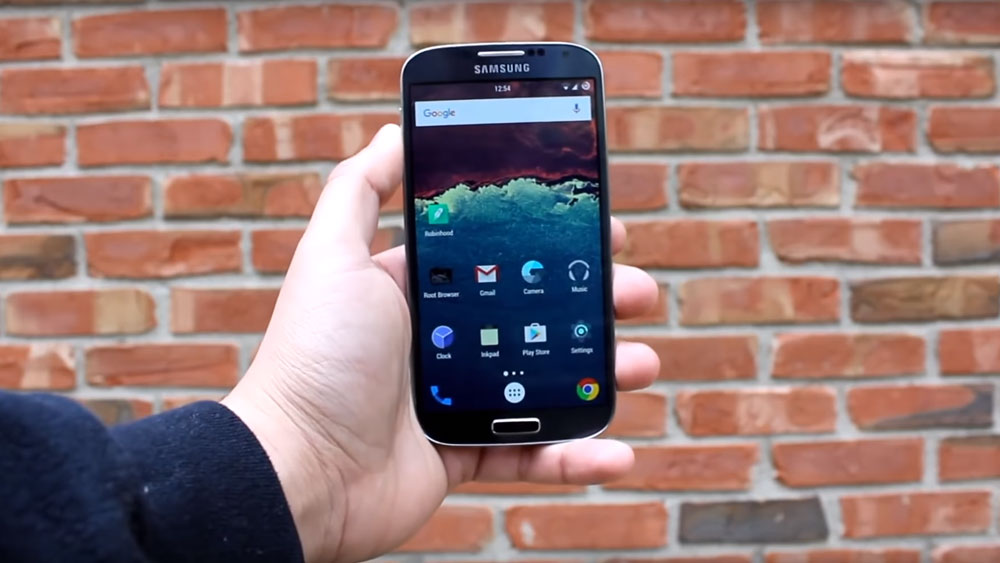 Although not the most recent Samsung Galaxy S device, the S4 still packs a substantial punch. Indeed, when stacked against current mid-range smartphones, it fares very well. But is it fair to judge a flagship device against less-expensive models? In this case, we think so. The tech specs of the S4 are really now in line with current mid-range releases from a range of manufacturers. And you’re not paying flagship prices any longer for the S4, which further justifies the comparison shift.

In fact, despite the S4 now being 4+ years old, the specs put it above almost all current mid-range devices but at a lower price. This makes the S4, and other older flagship phones, a very viable consideration when looking for a new smartphone without paying hundreds of dollars.

With a quality display, lightning fast processor, quality cameras, wireless charging and much more, the S4 is still a very capable and desirable smartphone. But exactly how capable? We asked our smartphone team to have a look and put the S4 through its paces.

The Samsung Galaxy S4 is available for just $149, brand new and fully unlocked.

Scores For The Samsung Galaxy S4 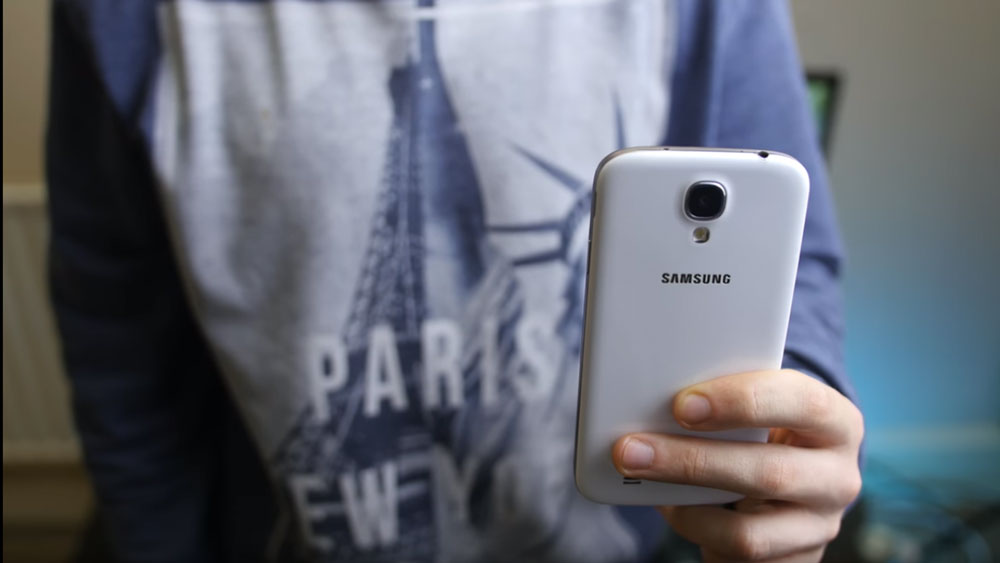 Our reviewers gave the Samsung Galaxy S4 an overall score of 4.4/5. This is based on the following categories:

It’s a fair assessment of the Galaxy S4 to say that the hardware, in particular, has stood the test of time extremely well. Not only do some components still easily outstrip any mid-range smartphone, they also give many high end phones a run for their money. It might seem a little odd that we would recommend a 4 year old smartphone, but here it is. The Galaxy S4 is a terrific smartphone at a terrific price. If this were released today, it would fly off the shelves with the performance it brings. 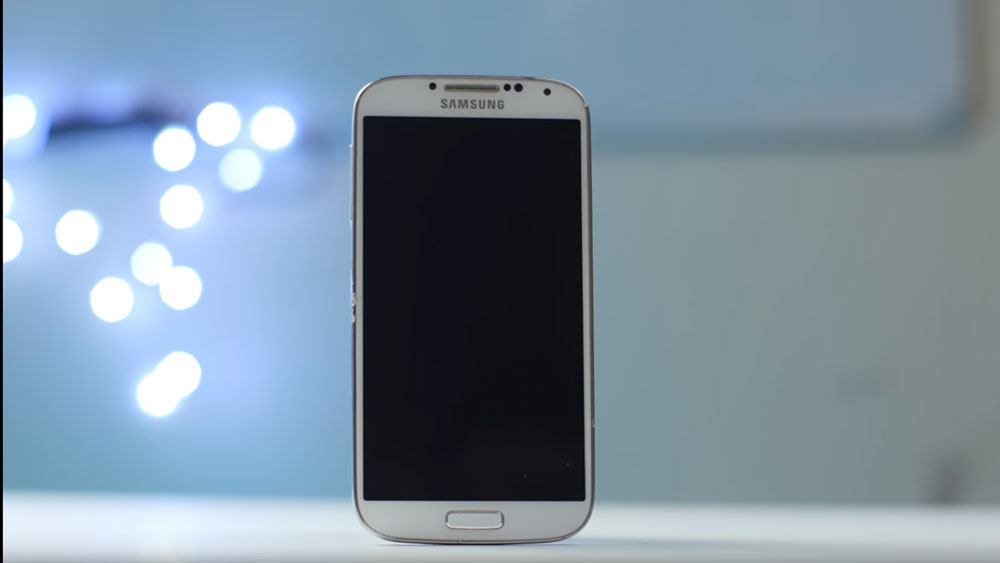 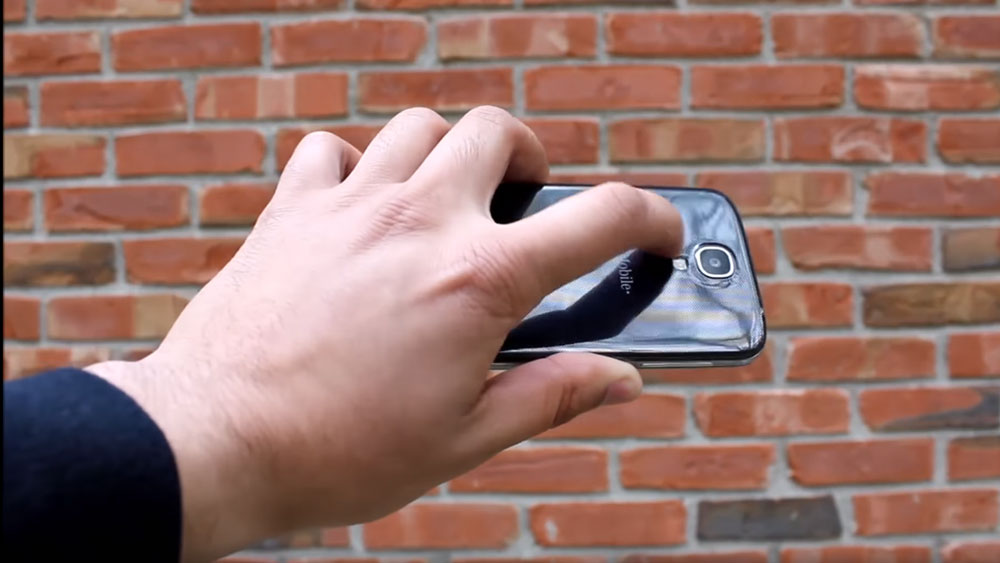 Unmistakably Samsung, is the best way to describe the Galaxy S4. All Samsung smartphones have an entirely consistent look. There are some slight variations across the different models, but there’s still no way to not know the S4 is a Samsung phone. The faux metal band around the edge of the S4 makes a comeback here. It helps to give a more premium feel than the plastic case might otherwise have brought. Samsung have actually gone to some lengths to reduce the size and weight of the S4. It’s just 0.31″ thick and weighs an incredibly lightweight 4.59 oz. Despite these very modest figures, the S4 does feel pretty solid. Any more weight loss and the device might have started to actually feel a little too light for a flagship phone. As it is, it’s just about perfect.

Unlike later models, the home button is still a nice hardware version. There’s nothing like feeling that “click” under your fingertips. It makes finding it in low light so much easier, and is one of the sad losses of “innovation” in the smartphone industry.

Although there’s nothing particularly groundbreaking about the design of the Galaxy S4, it is all warmly comfortable. The power and volume rocker buttons are on opposite sides to each other, which is always a good thing. The buttons also feel very solid in use.

All in all, you could put a Samsung Galaxy S4 alongside any comparably priced smartphone and not see any indication that the S4 has done anything other than age very well. 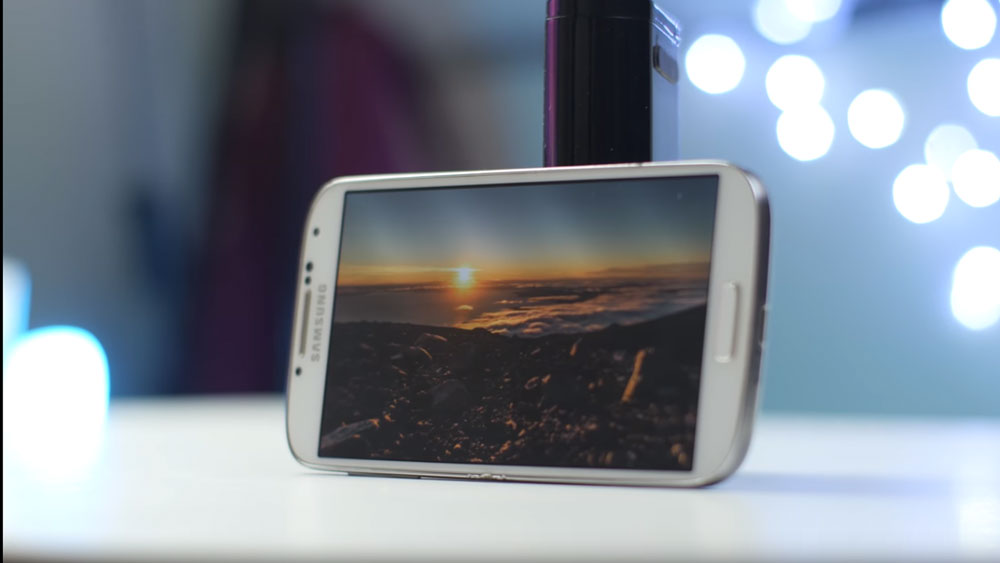 Even today, many mid-range devices are still carrying 720p displays. That the S4 has a 1080p Full HD screen is testament to the quality of the phone. And, as one of Samsung’s amazing Super AMOLED displays, the quality is just superb. Colors are, like with all Samsung phones, big and bold with plenty of saturation and contrast.

Despite the relatively small dimensions and weight of the Galaxy S4, the display is a nice 5″ in size. This is the perfect size for all round use. Although not the big, cinematic experience we are now seeing with plus sized smartphones, it is very simple to use one handed. The 5″ display also offers plenty of screen space for social media, email etc. , and still fits easily into any pocket. 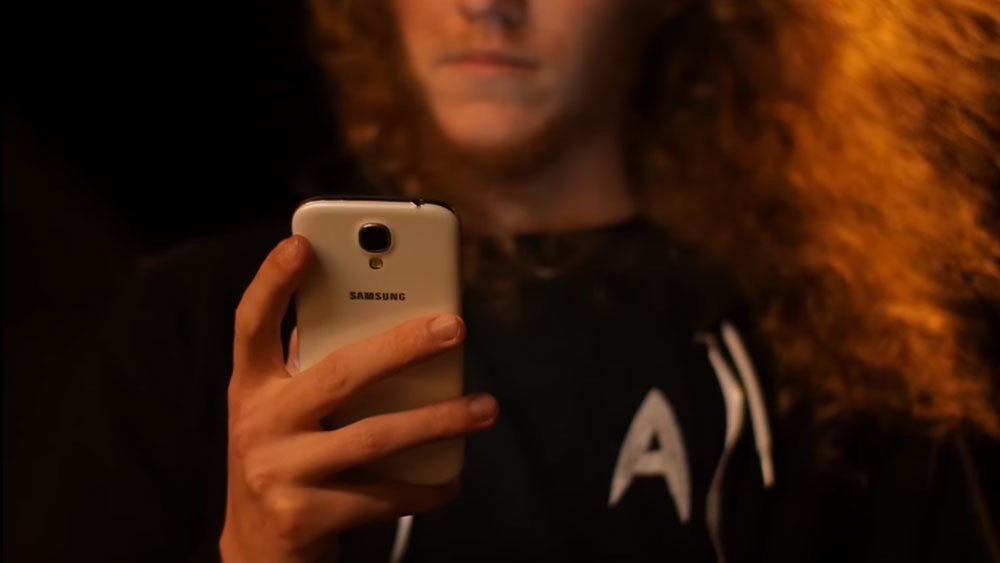 In all honesty, the S4 does come from a time when front cameras were still not the priority. Sensor costs, generally, meant that all the effort went into the rear camera, with the front camera reserved for selfies. Although “only” 2MP, the front camera of the S4 does have a few tricks up its sleeve. It can record Full HD video and also allows both cameras to be used simultaneously for either still images or video calling.

The rear camera, though, is something else. At 13MP, and with the ability to record Full HD video, that might be enough. However, the quality of the images and video is also top drawer stuff. But, if you still want more, the list of features for the rear camera is breathtaking. There’s something called “Sound & Shot” which allows up to 9 seconds of audio to be captured with a still image. Although not something you’d want for everyday shots, it’s a great option for special moments.  You then have “Drama Shot” which combines several frames into a single image. This is great for shooting moving objects in a single still image.

The camera app itself isn’t complicated, and is aimed at keeping things easy to access and easy to use. You also have panorama and, HDR  modes, together with lots of filters to improve your photos.

The rear camera on the Galaxy S4 is still just about one of the best you can get. 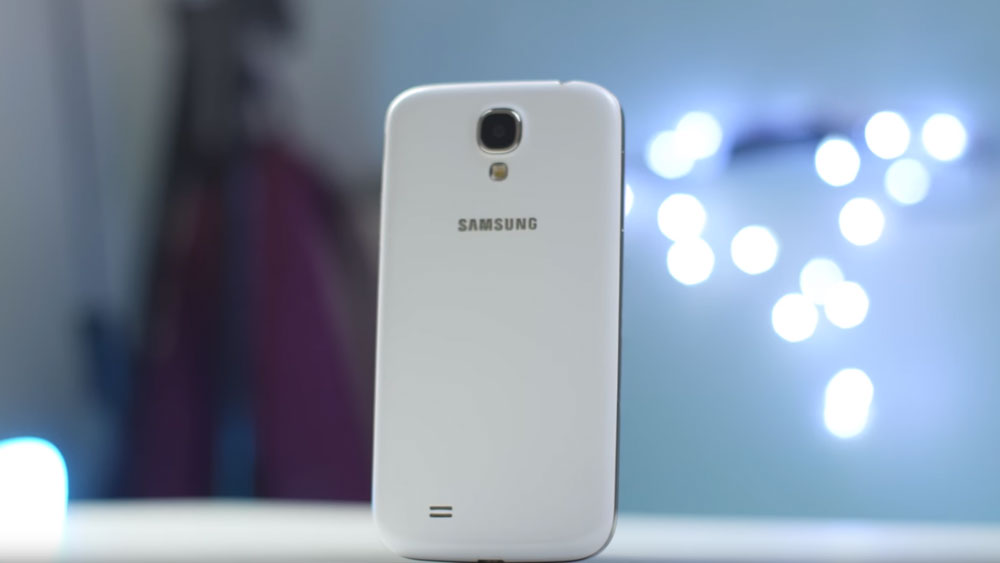 You won’t see too many mid-range smartphones with an 8 core processor. Quad core is much more common, which makes the S4 a little bit special at this price. It didn’t matter what we threw at the S4, it just strode purposefully on, matching our needs and expectations with power to spare.

Dual band, 802.11 ac WiFi, Bluetooth, NFC and even an infrared port make up an impressive feature set. You get 16GB of internal storage which, if not enough for you, can be expanded by another 64GB in the MicroSD card slot.

The 2600 mAh battery offers up to 17 hours of talk time or 15 days of standby. There’s also wireless charging for the ultimate convenience. 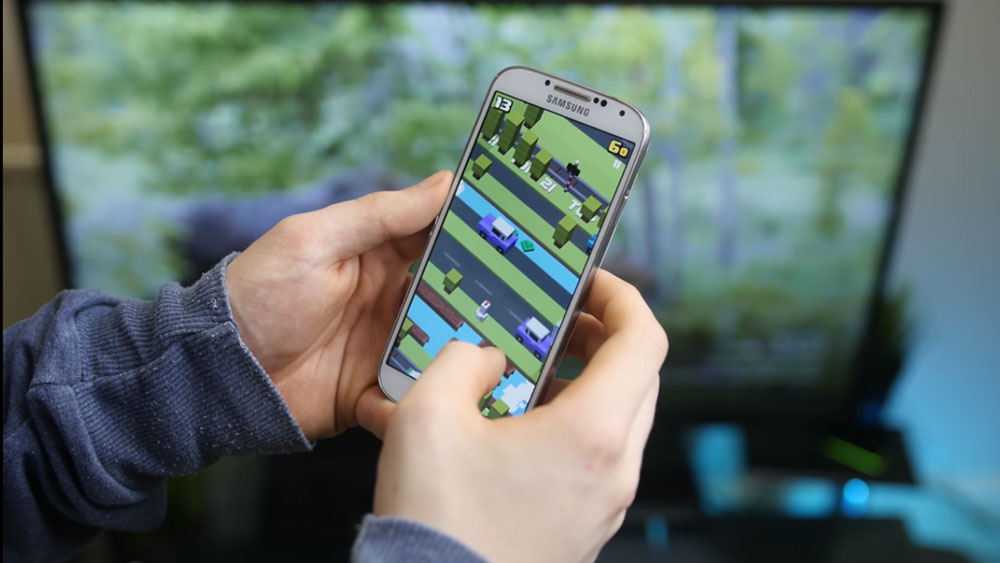 As well as the great camera app mentioned above, the Samsung Galaxy S4 has a few more surprises. Air Gesture allows you to move between images or other content quickly, and also lets you answer calls all without touching the screen. You can share your screen with your contacts quickly and simply.

Perhaps best of all, if you are watching video, and look away from the screen, the Galaxy S4 detects this, and pauses the video for you. It will even remember the spot across sessions, and let you pick up exactly where you left off. We weren’t convince this would work flawlessly, but it did so almost all the time. We found that just glancing away with eye movement didn’t always pause the video, but head movement did it every time. The more we used it, the more useful it became as we got the hang of triggering it every single time.

Samsung also include their well-liked S Health suite of apps. These provide a full health and exercise group of apps that are very useful, and very well done.

It would be unfair to say the Galaxy S4 struggles to compete with brand new flagship smartphones. Put any flagship from 4 years ago up against its present day alternative and none would fair as well as the S4.

Performance is outstanding, the display is amazing and the rear camera is just too good not to be impressed.

For $149, we really don’t think you’ll find a better smartphone.