Nowadays, displays over 5 inches, even over 6 inches, are fairly commonplace. Two of the best in recent years have been the Samsung Galaxy Note 4 and the Motorola/Google Nexus 6.

Both had great features with the performance to match. Not to mention stunning displays.

It’s not wrong to say that most smartphones look alike. Some have sharp corners, some don’t. Some have slightly convex rear cases, some don’t. But, generally, you need to look twice to see any difference. Despite that, both the Note 4 and the nexus 6 are great looking devices. The Nexus 6 has more curve to the corners, and more of the front is taken up by the screen. 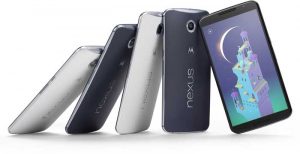 For its part, the Note 4 still has a physical home button, which is beloved by some, where the Nexus 6 is all touch. Although it can be argued that a physical button is something else to go wrong, there’s nothing like a solid, hardware click under your finger. Both have a metal/glass front and a plastic back. Both do feel a little cheap on the back, to be honest, which is disappointing for two supposedly flagship-range models. The Nexus 6 is water resistant, which the Note 4 isn’t. That may be important for those with clumsy fingers. Or who live on a boat.

As you might expect for two of the larger devices around, the battery capacity is pretty impressive. Both have 3220mAh batteries which gives 20hrs talk time for the Note 4, and 24 for the Nexus 6. Motorola have always been good at squeezing every ounce of life out of the battery, so this is no surprise.

Or “cameras”, if you prefer. Here the Note 4 has the edge. Actually, it’s more than an edge if you compare straight numbers, but not so much in the front cameras as the rear. The front camera on the Note 4 is 16MP against the 13MP of the Nexus 6. This seems a lot, but pixel counts only matter up to a point. In fact, the start to become as much of a hindrance as a help, past a certain level. 13MP is plenty of pixels to shoot images for printing up to 16 x 12 inches. If you regularly print bigger, you really need to buy a dSLR.

But, it’s the rear camera where the Nexus 6 is terribly exposed. The 3.7MP on the Note 4 is perfectly reasonable, if not exceptional. The 2MP on the Nexus 6, though, is very disappointing. Although 2MP is enough for selfies and online use, a little more MP would mean a little more quality if ever pinch-to-zoom is used. Only having 2MP reduces the quality quickly when trying to get closer with the camera. 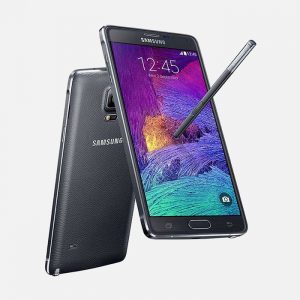 Both can record 4K video, which is a nice touch.

Both devices are 4G ready, which means a great experience on those huge displays. For Wi-Fi, Bluetooth and GPS, the hardware specs are all but identical, and both have NFC capability.

Again, the Note 4 just takes this one by having an infrared port. It might not be that useful to everybody who buys a Note 4, but enough people will use it to make it a step up from the Nexus 6.

Both displays are Quad HD at 1440 x 2560px. The Nexus 6 is a little larger at 5.96 inches to the Note 4’s 5.7 inches. That may not sound a lot, but it can make a big difference. Where the Note 4 noses ahead is with the Super AMOLED display type, against the Nexus 6 standard AMOLED. Both are great, but the Note 4 just carries a little extra punch.

Now it gets interesting. For all that great hardware, the Note 4 is a little disappointing in benchmark tests. In every single category, the Nexus 6 out performs it by some distance. In some tests, the Nexus 6 performs up to a third better. Part of this might be that Nexus devices tend to run a lighter, cleaner version of Android instead of the having the bloated skins that others – Samsung, we mean you – like to stick on top.

Whatever the reasons, the difference is noticeable on certain tasks.

As great as the Samsung Galaxy Note 4 is, those performance results are a concern. But, despite that, it probably still just about beats the Nexus 6 in a foot race. The display is better, the cameras are better, and it just looks a little nicer all round.

We also need to mention storage. The Note 4 has a MicroSD card slot, where the Nexus 6 doesn’t. Even if the Nexus 6 managed to win more categories, this might have stopped it winning this match up. For a device for which media playback is a big thing, not to include a card slot is a dreadful decision.

The Nexus 6, though, is a fantastic device. Had it been against any other phablet, it may well have taken the prize.