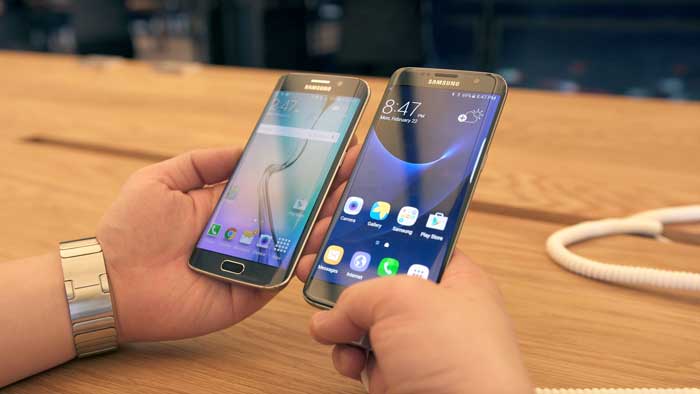 Although Samsung make great smartphones, over the years they have been known to cause a fair degree of confusion with the way the name their devices. It is now just about known by everyone that the Galaxy S range is the Samsung flagship but, even within that lineup there are several different smartphones and tablets. As an example, we have the Galaxy S7 and the S7 Edge, the two true heavyweight hitters of the whole Samsung catalog. So what is the difference between these two, it has to be said, fantastic smartphones? 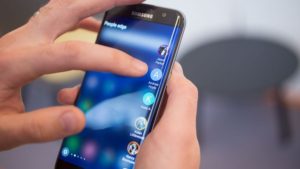 Before we talk about the design differences, it should be said that these are two spectacularly beautiful smartphones. As a result, we won’t judge one to be better than the other in the aesthetic stakes, we’ll just point out the differences and let you make your own mind up.

The biggest difference between the two is size. The Edge display is ½” bigger than the standard S7 in a slightly taller and wider body, but the Edge actually comes in at 2mm thinner. Also, looks
wise, it’s clear to see where the Edge gets its name from. The S7 is of the more usual smartphone design of a display set into a flat front face, whereas the Edge has a display which extends to, and around, the curved edges of the case. It might seem a  small thing, but the effect is just beautiful.

This curved edge design also allows specific features to be included as the display can be swiped right from the edge of the device, and apps are available which utilise this.

Okay, we said we weren’t going to judge, but we can’t help it. The S7 Edge is just awesome to look at.

Although the exact same display is present in both, because the S7 display is slightly smaller than the Edge, it has a slightly higher pixel density. Also, because of the curved edge nature of the Edge display, reflections can be a little stronger and more unpredictable.

Identical CPUs, graphics processors and installed RAM (4GB) mean there’s absolutely nothing to choose between them. The Edge actually scores a fraction higher in benchmark tests, but not enough to show a difference in real world use.

Again, the exact same cameras front and back are in both devices, a 12MP camera with built in image stabilization, and 4K video recording for the

rear, and a 5MP camera in the front. 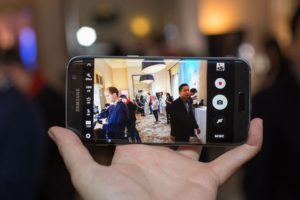 Incidentally, Samsung chose to drop the MP count in the S7 from the S6, from 16MP to 12MP. This means bigger pixels on the sensor, and therefore better quality.

Even though the two devices are almost identical in terms of the components used, the bigger physical size of the Edge means it is able to carry a bigger battery – 3600mAh compared to the 3000mAh of the standard S7.

Both give great performance, but there’s no getting round the fact that you will get longer for your money out of the Edge, based on simple mathematics.

It might seem obvious to say that the Edge is the better of the device, as looks are about the only place things differ, but it’s not quite so easy to choose. Chic has its price – literally – and the Edge is more expensive than the standard S7. It’s also bigger, so those with smaller hands may struggle with operating the Edge one-handed.

But, if you can handle the extra size of the Edge, and your wallet doesn’t burst into tears at paying that bit extra, the looks of the Edge are a definite winner. But don’t let that put you off the standard S7 altogether, it’s only a curved edge away from being the best smartphone available, and deserves your attention.

Where to Go Now?

Deciding which phone to buy is only the first part in the complicated process of buying a device. Here at Mr Aberthon we want to make that job all the more simpler for you, so we offer you a couple of links to the Samsung S7 and S7 Edge to look into.

* Prices fluctuate quite often from device to device, even within one single listing. Be sure to note the details that are applicable to you such as if it is the international or the US version of the mobile phone.

Cool Phone, but Anything Cheaper?

We totally understand that while we all have our ideal phones that we’d like to own, the price is often throws the ball out of the park. Therefore, Mr Aberthon offers wide range of devices to suit all price ranges.

There is a menu search option on our website to help you limit the price to whats within your ball park, such as all phones under $300, and you will very likely be surprised with just how many awesome devices we have. Some may be compromising on the super amoled screen quality, but it’s not the case for the majority. Check out our blog post titled, “When is it time to upgrade“, to find out our opinion on the matter. In real short, we believe that we all have to thank the latest of the Samsung S Series, for example, for coming out, so that we can go out and buy the model or two behind it with an easier mind and a fuller bank account.

So What Does Mr Aberthon Suggest?

We are proud to offer the Samsung S6 for $299, quite a steal especially considering that this is only a model behind the S7 and is over $175 cheaper. Looking for something even more cost friendly and just as reliable? How about the Samsung S5 or S5 Active for only $199?

Our conclusion is that yes, the newest devices will always have a more modern feel about them and a make a more stylish statement to those around us. Yet, the previous devices may very well have the same internal speed and performance, and may suit your needs just as well. We want you to sleep easiest at night, so we suggest that you go with what your heart tells you.

*Prices vary with time. We take no responsibility for price changes.