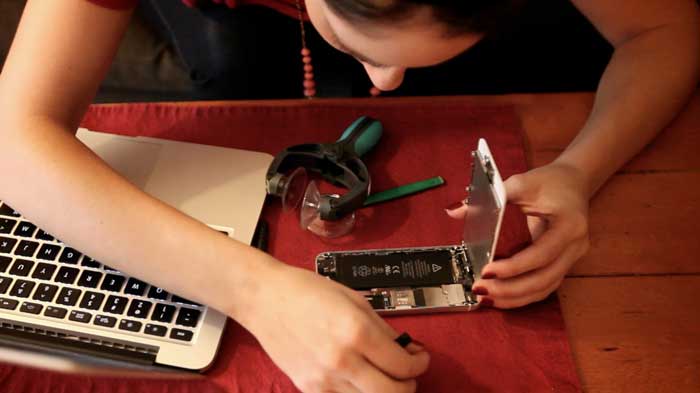 Most full-screen display type smartphones are non user-serviceable. That’s to say that they were never designed to be opened by you or me. Over time, though, there are things which you should be able to do, such as replacing a dying battery.

The main reason, of course, for this lack of serviceability is to get you to upgrade your phone regularly. But if it is only the battery, and the device is out of warranty, why shouldn’t you change it? The answer is, you should. If your smartphone is fast becoming unusable because a full charge is gone within a matter of hours, then you really have nothing to lose. If you try and replace the battery and you break something, so what? You would have had to change the phone anyway.

With that in mind, we thought we’d give a few tips on how to change the battery in your smartphone.

Disclaimer: You should really get someone who is qualified to change the battery to do it for you. We are not responsible if you damage your phone following any of these instructions. You perform this procedure at your own risk.

In all cases, watch the video the whole way through before doing anything.

Smartphones were actually designed to be opened. After all, if they weren’t, they could never be repaired under the warranty. What manufacturers do, though, is build in a necessity for tools over and above what most people will have available. In this internet age, though, nothing is impossible.

If you’ve been keeping up, you’ll know that Apple have once again treated their customer base like saps who deserve their pockets picked regularly. To “encourage” people to upgrade, Apple have been pushing out software updates to older models which deliberately slows the phone down. Apple claim they did this to take the pressure off ageing batteries. But you don’t need to be a farmer to smell that one from 3 fields away.

As a result of being caught in the act, Apple are offering to replace batteries in the iPhone 6 or later for $29. The offer is only good until 12/31/2018, so it’s worth making a diary entry. Any Apple Store or authorized re-seller should be able to help.

But what if you don’t have a recent model? According to Apple you’ve had your money’s worth out of the battery in a 5s and earlier, so you’re on your own. Don’t despair, though, because we’re going to show you how to do it on your own. You’ll need a steady hand and a little bit of bravery as you’ll be removing the screen but, otherwise, it’s fairly simple to do.

The best way to get all the kit you need is to look on eBay. There, you’ll get a genuine battery and all the tools you need for about $20-25. It will include a couple of tools you probably won’t have, and is worth the money for those and the battery alone.

The video here shows how it can be done in 6 minutes. But, unless you’ve done it a lot, it will probably be more like 10-15 minutes.

Here is a note for iPhone 5/5c. Although broadly similar, there are one or two differences with the positioning of the cables inside the case. Therefore you should check if you are unsure.

The tool for prying the screen off, and the tool for removing the screws on the bottom edge of the iPhone are not standard everyday toolbox tools. Yet the screws inside are basic Philips head screws.

Just for the record, we really recommend only doing this if you are confident in using a variety of tools and also a heat gun. Samsung have taken the decision with recent models that the case should be firmly glued on, and the heat gun is needed to soften the adhesive. If that makes you nervous, then walk away. Why Samsung chose to go down this route instead of just flipping the back off in the S4, is so as to make the device waterproof.

Assuming you’re game for having a go, based on your phone basically being on it’s way out anyway, here’s the video.

Once you’re into the case, there is still lots to do. As well as 13 screws, you still need to separate the front screen from it’s housing. This is likely to also require the heat gun. You must understand that there are several ways you can break your phone doing this. It is not complicated – it’s actually quite easy in principle, but certain steps are delicate. Don’t say we didn’t tell you.

You will also need to soften the glue a third time to get the case to stay together. What this does to the integrity of the glue, we’ve no idea. Best to assume waterproofing is no longer included.

As another example of a waterproof phone, the slight difference here is that you may need to replace the glue, and not just re-soften it. Most IP67- compliant smartphones have this requirement. If you don’t replace the glue, you have to assume your phone is no longer waterproof.

As we mention at the top of this article, you should only do this if you have nothing to lose with your smartphone. If it’s dying anyway, this is a good way of giving it the kiss of life for what is a small amount of money. If you end up damaging the phone beyond repair, all is not lost. The tools are fairly similar across all makes and models, and will always come in handy.

All these guides are not that difficult. That doesn’t mean they’re really easy, as they can be quite fiddly, but they are doable for most people.