Protecting Your Smartphone From The Elements 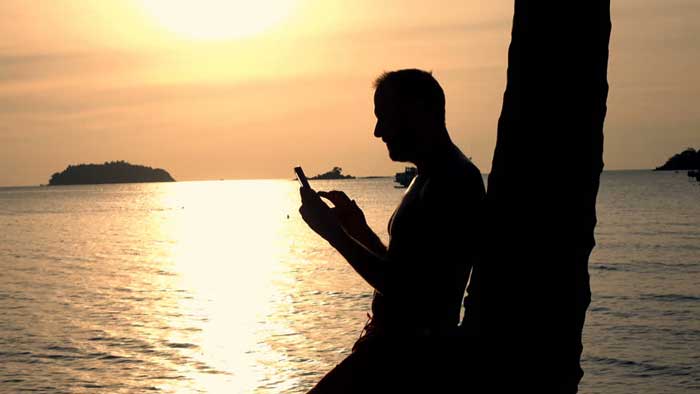 More and more smartphones having some degree of water protection built right into the design. Yet it still only partly covers you against clumsiness and the unseen dangers that lurk around us in certain environments. 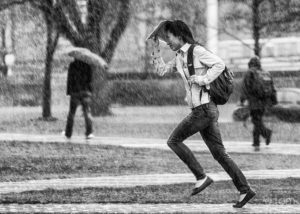 Let’s start with the easy one. Water kills electronics. It’s no respecter of price or style. It just kills almost all consumer electronics. more and more high end phones have nowadays have the 30 minute/6 feet protection. Yet we really should pay more attention to our general environment, and not just whether we’ve dropped our phone in the bath.

Moisture and Salt Are Dangerous

Off to the beach? If so, you need to think about all that moisture and – worse – salt that’s just floating around you unseen. Your smartphone is likely to be warmer than what might be considered room temperature, even if you have it in the shade. But even under moderate use it’s still likely to be cooler than the air around it. If you’ve ever seen a cold bottle in a warm room, you’ll know how condensation works. It’s a similar thing here, but with the added bonus of being virtually undetectable.

The moisture itself, while a minor issue, isn’t the biggest enemy. Salt will rot everything it spends any amount of time with, especially metal. You may not see all the salty residue that is making its way into every nook and cranny of your phone, but it’s there. In a couple of years, you won’t remember your day at the beach. You’ll just know your smartphone doesn’t look its best any more.

The Solution is Pretty Easy

If you don’t want to put on a waterproof case which, let’s face it, can look pretty clunky, all you need is a zip-lock bag. That’s it, just a ziplock bag which costs like 10c. If your phone has a glove sensitivity feature, you don’t even need to take it out of the bag to register clicks and swipes. 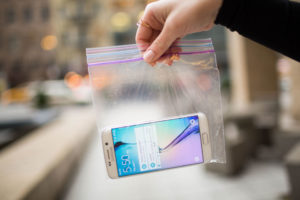 But, for your 10c, you might need to do a little more.

Your smartphone gets hot, very hot in fact. You’ll know if you play games or watch movies for any length of time that the back of the case gets pretty warm indeed. Put it in a ziplock bag and that heat has nowhere to go. Put the phone in a bag, in the sun, and you’re looking at some sort of meltdown with the internal electronics. In order to reduce weight, manufacturers use the lightest possible materials, both inside and out. That means incredibly fine cables are being used to make the many connections required just to keep the phone running. Throw in the sun on even just a warmish day, and your smartphone will reach internal temperatures that go way beyond what it was intended to do.

Oh, and batteries can explode at extreme temperatures. Just sayin’.

More Things to Keep an Eye Out for

So, the dilemma is: do you put your phone in a ziplock bag and risk extreme heat? Or, do you take it out and let it breathe? The answer will always be the bag, in case you really didn’t know. But you then need to take care to keep the bag and phone out of direct sunlight. Manufacturers will generally only rate a smartphone to be usable up to around 95 degrees before the likelihood of damage increases significantly. But it’s only around 80 degrees at the beach, right? Wrong. It’s about 80 degrees in the shade, and that’s a whole lot of shade. That refers to not a single umbrella of about 6 feet radius where the heat barely drops from edge to center.

In the sun, temperatures of the materials used to make your lovely shiny smartphone will easily reach 150 degrees. That is if they are left in direct sunlight for even a short time. You know how hot your car gets inside when it’s left standing on a hot day? That’s the inside of your smartphone right there, but hotter. 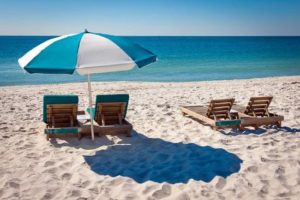 That ziplock bag you’ve been keeping safe might just save your phone in more ways that you’d imagine. As long as the zip and plastic in the bag are undamaged, a sealed ziplock bag will float. It needs a little air in the bag, obviously, and the heavier the phone the more air might be needed to keep it afloat. But at the very least the journey to the bottom of the river, pool or whatever will be greatly slowed down. It will give you time to recover the bag and your damage-free phone.

And yes, that 10c marvel will also protect your phone from sand, dirt and just about anything else. So, if you like your vacations and days out to be a little more adventurous, don’t forget to bag up.

Of course, you can also buy an expensive waterproof cover or case for your smartphone. It will allow you to use the phone without restriction. But, if you spend all your vacation looking at and using your phone, you’re probably beyond help.