Mr Aberthon is proud to present our Samsung Rugby Pro in New Condition. This robust smartphone is unlocked to every mobile plan and compatible with all GSM networks. The phones is completely covered by the Mr Aberthon warranty.

About the Samsung Rugby Pro

Also gone is the proprietary Samsung operating system of the Rugby 1 thru 4 models. It has the adoption of Android and all that Google’s OS brings to the table. A front camera has been added, there’s a high capacity battery to cope with the extra demands of the Super Amoled display. A dual core processor, was included as well, and more in a device that weighs just 4.6oz.

But the point of the Rugby range has always been to be the toughest kid on the block right?

Well yes, and the Pro is no different. It still complies with the IP67 and Mil-STD 810 standards for dust and waterproofing, shock resistance and more. The Super Amoled display is protected by an anti-scratch touchscreen. 4G LTE with tethering options makes the Rugby Pro a very serious contender indeed.

The Samsung Rugby Pro is built on the Galaxy S platform that Samsung use for all their smartphones, so you know right away that it’s going to be impressive. Impressive enough, in fact to be able to capture 1080p video at 30fps. Don’t just take our word for it, though, have a look at the truly impressive feature and specification list.

In real life, the Rugby Pro is as good as it looks on paper. The Super Amoled display is crystal clear, with excellent performance from the 5MP camera and superb video capture.

Call quality is as good as you’ll get anywhere, with incredible clarity and so few drops. It will make you wonder why all manufacturers can’t make their phones do the same things. Overall speed is impressively zippy and all the included apps just raced along both with startup and during actual usage.

The toughness is every bit as good as the Rugby 4, and you’ll soon start to realize that the screen isn’t anywhere near as fragile as you think on first look. Waterproof to 3 feet for up to 30 minutes, unlike most devices which comply to the standard, the phone will actually work underwater. Don’t go swimming though, it’s a protective feature, not a fully waterproof phone!

With access to the Google Play Store, there’s really nothing the Rugby Pro can’t do. Samsung have added their TouchWiz layer on top of Android, allowing for a customizable home screen and more. The Rugby Pro can be used as a mobile hotspot to allow family and friends to connect to the internet through your data connection. It also supports VPN for those who need it.

There really are no shortcomings on the Rugby Pro considering that it’s designed for a very active lifestyle. It is tough, fast and stylish.

Worth Upgrading From the Rugby 4?

It’s probably fair to say that, as the Samsung Rugby series have progressed, the models have been on a steady evolutionary path. The Rugby Pro, though, is a real game changer for fans of the phones. No flip top and a capacitative touchscreen make the Rugby Pro almost part of a different range altogether. Yet that unmistakable rugged-self is still the thing that sets it apart from comparable smartphones.

The previous Rugby range of phones offer an alternative to the Pro, rather than competition within the range. It’s no surprise to say that the full screen of the Pro will undoubtedly be at a higher risk of damage regardless of how tough it is in comparison to its competitors. It’s there that might make the flip top design of the Rugby 4 (for example) a better fit for certain people.

Otherwise, the Rugby Pro really is in a different class to it’s predecessors, and isn’t embarrassed by phones costing 3 or 4 times as much. From the construction to the impressive feature list, everything about the Pro demands and deserves respect. 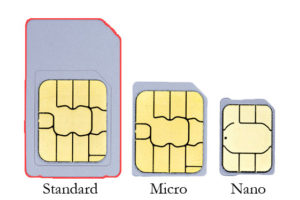 The Samsung Rubgy Pro uses the standard sized sim card, the furthest from the left on the diagram to the left. It is largest of the three generic sizes and the easiest to cater to if you already have the wrong sized sim card. If you have a different size sim card, you can easily purchase an adapter from amazon.com or ebay.com. The adapter will enable you to place your current, smaller sized sim card into the slot of the Standard Sized Sim Card.

The rugged aspect of the Rugby Pro isn’t an afterthought as with some other designs. Everything about this device is well thought out and easy to use. Physical buttons, as opposed to just software-based make for a very secure and confident operation. The phone feels like it belongs in your hand.

The point of the previous Rugby models was that they weren’t designed to be an office in your pocket. Rather they more than made up for it with the features they had and that they are almost freakishly strong. The Rugby Pro bridges that gap to the likes of the iPhone and other Galaxy models. But, crucially, it doesn’t compromise anything on the protection aspect that has made the Rugby series such a success.

It’s always suspicious when a manufacturer brings out any device with a “Pro” suffix, but Samsung got this one exactly right. Pro features, Pro performance and Pro ruggedness make this a smartphone worthy of the name.

Q: Is this device compatible with Verizon?

Q: What kind of plan do I need?

A: The Rugby Pro is a smartphone device and therefore needs a data plan. Ask about possible data plans when you speak to your network provider and they will advise you. However, the Rugby 1, 2, 3 or 4 do not need a data plan.

Q: Does it have a keyboard?

A: Since it’s a smartphone, the Rugby Pro does not have a physical keyboard. However it does have a touch screen one that comes up when there is the ability to type. Once you accustom to it, it will become second nature to you. There is also always the option to use Swype that lets you type without lifting your finger. Simply slide it along all the letters in a word and the device will guess the word.

Q: What size SIM card does it need?

A: There exists three sizes of SIM cards, the Standard, Micro and Nano. This device uses a standard size SIM card. If you already have a standard SIM card, simple insert it and it will transfer your number to the new device. If you have another size, you may purchase a SIM card adapted that allows you to use any size SIM. Or you may contact your provider and they will give you the proper size SIM which is the Standard size.

Q: How great of an Internet connection can I get with this phone?

A: The Rugby Pro connects well to the internet via 4G or Wi-Fi networks. The main advantage it has over the Rugby 1-4 is its ease of connecting as a smartphone.

Q: Can this device act as a hotspot?

A: Yes it is a great hotspot. Just as other hotspot sharing devices, data on this device is easy to share with others by setting it up in the settings menu. One smartphone can connect to multiple phones or laptops to receive data connection. Be aware, though, that all the connected devices will be using this devices data at that time. So ensure there is enough data to avoid going over it’s data plan.

A: The front camera is 1.3 Megapixels and the rear camera is 5 Megapixels. Enjoy taking photos or selfies with the two cameras supplied. Having two cameras is one big advantage it has over its older brothers, the Rugby 1, 2, 3 or 4.

Q: What comes along with the phone when I buy it?

A: When you buy the Rugby Pro from Mr Aberthon, you will get the following: the phone, battery, back door and a two piece charger.

Q: Is this device capable of talk to text?

A: Unfortunately no, it will not be able to.

Q: How many SIM cards can I insert inside the Rugby Pro?

A: This device is a single SIM phone. To use a second SIM card, you will need to remove the one that is currently in the device and replace it. There are devices that have Dual-SIM card slots and have the capability of using both simultaneously.

Q: Is there near field communication (NFC) on this device?

A: Yes there is NFC. To use NFC, you will simply need to enable it in the settings. Then place both devices head to head with each other to share data.

Q: How much memory does this phone have?

A: It has 8GB internal memory and can have up to an additional 32GB via Micro-SD card. That is plenty for apps, music, pictures or small videos.

Q: Is there a headphone jack on this phone?

A: Yes there is a standard headphone jack. It will fit a set of headphones, perhaps a selfie stick or anything else that is compatible with this insert.

Q: Is the phone battery removable?

A: Yes it is, quite conveniently so. It is removable and easy to replace. Eventually, with wear and tear, any battery may not hold as well of a charge. Thankfully, with the Rugby Pro it is easy to replace with a new one.

All of the items on the Mr Aberthon website are completely covered by our 14-day return policy.

If you choose to return your device, you will receive the full refund. Mr Aberthon does not charge any additional restocking or handling fees. In order to qualify for the return policy, the product ID number will have to match the number on the device that we sent out (to protect us against scammers and fraud) and the device will need to still be in mint condition.

We are proud to offer shipping to Canada. Here are the costs:

Extra costs may occur for the customer due to duty and taxes.