Although smartphones such as the iPhone and Samsung Galaxy S dominate how we think of cellphones today, there is actually far more choice than you might think. Not everybody, of course, needs a $1000 smartphone to make calls and texts. Also, not everybody wants or likes an on-screen keyboard. Thankfully, it doesn’t have to be that way.

If you find on-screen keyboards fiddly and a little annoying, then why not use a full QWERTY keyboard? That’s right, a full hardware QWERTY keyboard on a smartphone. Both the Pantech Laser and Samsung DoubleTime have one, and manage to do so while keeping the case remarkably thin.

So they stay the same. 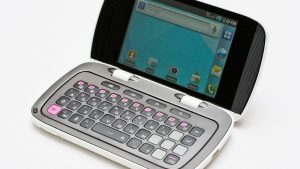 That’s not to say that there aren’t differences between the Pantech Laser and the Samsung DoubleTime, there are, and some very important ones too. But it’s easy to get bogged down in the differences between some devices when they don’t really affect the user experience all that much.

For example, the display size is pretty much the same, as is the camera resolution. These are very important features, so it’s nice to know one or the other isn’t scrimping. Both devices also incorporate a MicroSD card slot. If you plan to carry mp3s or video files with you, you’ll need this.

Both the Laser and DoubleTime can also record video. It’s not at a super-high resolution, but it’s certainly enough for some home movie “keepers” when you need one.

At first look,  the size of both the Pantech and Samsung don’t look especially different, but look again. The thickness of the Samsung DoubleTime is about 60% more than that of the Pantech Laser. Pantech claim they have created the thinnest ever full hardware keyboard smartphone, and it’s hard to argue.  0.39 inches thick is thin by anybody’s standards and even beats many smartphones that use on-screen keyboards.

To be able to slide a full hardware keyboard out of such a slim phone is a remarkable technical achievement. Pantech, take a bow. 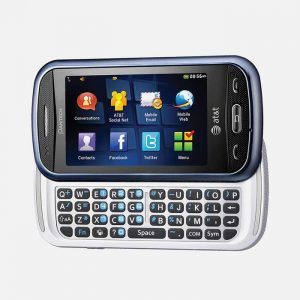 Another difference is the fact that the DoubleTime runs on the Android operating system, whereas the Laser runs on a custom operating system from Pantech. Ordinarily, it’s tempting to say this was a really big deal, but is it? The type of user these devices are aimed at isn’t really a gamer/social media type. It’s aimed at people who want to use a phone like a phone, with calls, texts and perhaps emails. Anything else isn’t really a given.

Neither device has Wi-Fi but, again, this might not be the omission it sounds like. If you’re not online constantly, why would you need Wi-Fi? Calls and texts aren’t (usually) routed over Wi-Fi, and emails take up no data bandwidth unless you’re including large files as attachments. Again, the people who might get the most use out of the Laser and DoubleTime probably aren’t going to do that.

Battery life is very similar as well, so that’s not going to swing this comparison one way or the other.

We’ve saved the biggest difference for last. The Pantech Laser is a standard, slide-out affair to reveal the keyboard, but the DoubleTime does it very differently. It is, in effect, a flip phone, but with the hinges on the edge, instead of the top of the phone. What this does is gives you access to two displays. Both the screen visible when the device is closed, as well as the one exposed when open are fully functional as main displays.  It’s probably aesthetic more than practical, as the “closed” display turns off when you open the phone. It does, though, offer a little more flexibility in use, as you can open the phone to whatever angle you like. Like a (very) mini laptop, if you like.

If you really, really want an answer as to which is best, it has to be the Pantech Laser. Only because it looks just a little bit nicer and is razor thin. That hinged second display is also a nice touch. Otherwise, both are great for anybody who likes the feel of a real keyboard.

There’s only a few dollars different in price, so it does come down to a somewhat subjective decision. Either way, neither the Pantech Laser nor Samsung DoubleTime will disappoint.