The Netgear Nighthawk Mobile Router is a sort of cross between the type of router you may have at home, and a mobile hotspot. It isn’t truly a router in that it can do everything a true router can do, but it does go much further than most mobile hotspots.

Netgear have long been a leader in devices for receiving and transmitting data. It seems reasonable, then, that they might be in a position to claim some sort of superiority as they do with the Nighthawk Mobile Router. But here’s the immediate glaring issue. The Nighthawk Mobile Router is expensive. Very expensive, in fact, in comparison to most mobile hotspots. Does it do enough for its money to justify the high price?

We set our mobile data experts loose on the Nighthawk to decide exactly that.

Scores For The Nighthawk Mobile Router 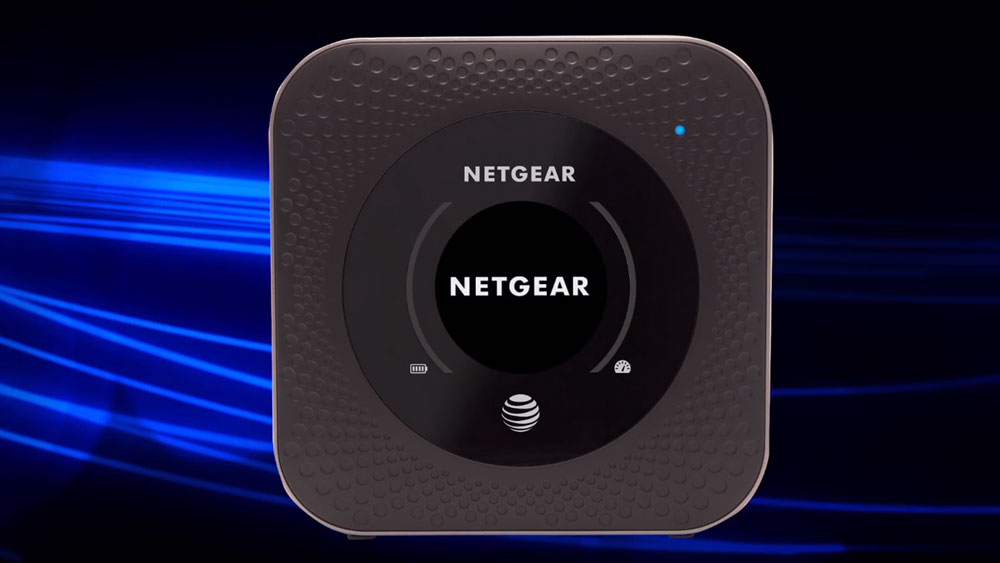 When tested by our experts, the  Nighthawk Mobile Router scored 4.4/5. Such a score is rare, as there’s almost always something which will drag the overall total down a little. Although that is the case her with one category, the rest kept the level high.

Anybody who is serious about staying connected on the move will love the Netgear Nighthawk Mobile Router. But, oh, that price.

People Who Would Benefit From Owning A Nighthawk Mobile Router 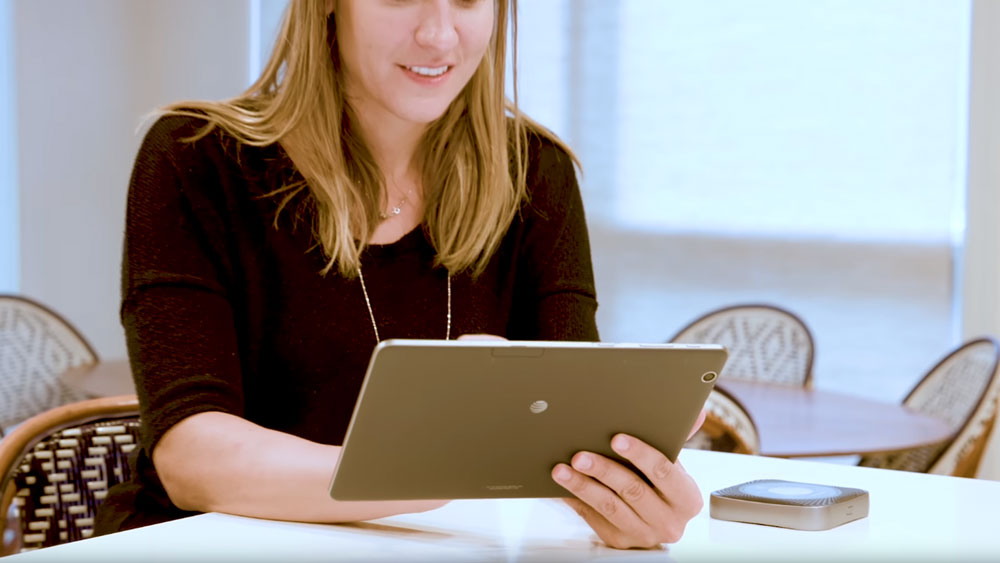 Mobile hotspots  are useful for just about anybody who travels even modestly with family or friends. But the Nighthawk Mobile Router is for those who demand more. It’s no casual device for just getting online occasionally. Instead, it is meant for those who need serious mobile data access on a regular basis.

The performance from the Nighthawk Mobile Router is the key. It will, unlike almost all mobile hotspots, outrun every single network out there. If your 4G speed is anything like fast (and not all are, by the way), then the Nighthawk will easily keep up with bandwidth to spare. Some people who would have a genuine use for it would be: 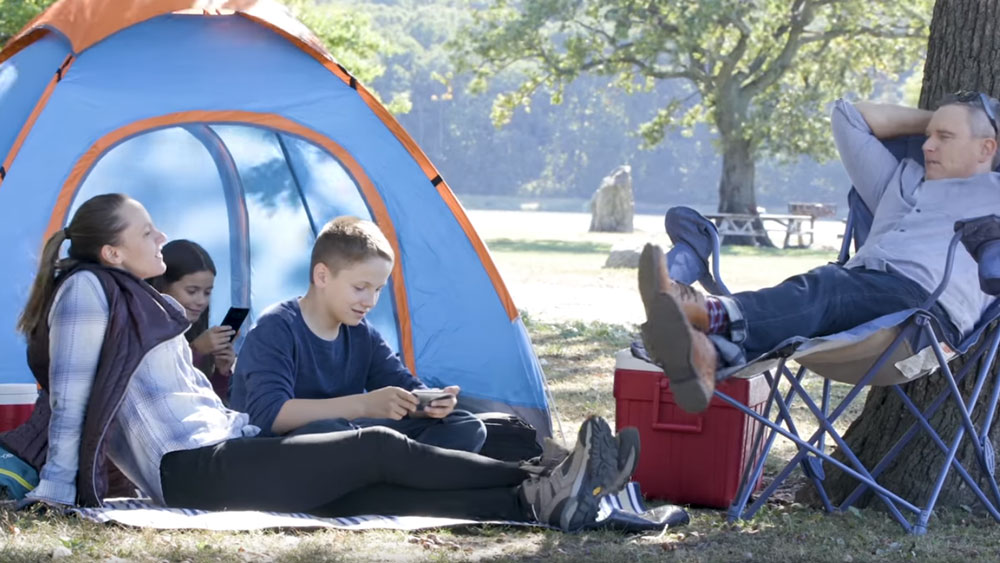 As great as the Nighthawk Mobile Router is, there’s no getting around the cost. The cheapest we can find, even for a used model, is around $150. Brand new, even with a hefty data contract, you will be facing an initial cost well above $100. For an outright purchase, you will need something approaching $300+ before you even get near the retail price.

And that, for many people, will be a problem.

However, the Nighthawk Mobile Router isn’t really aimed at casual users. The target market is those who truly have an everyday need  for such a device. This usually means people who will see it as a business purchase, and then the price becomes easier to swallow. Tech heads who like to have the best will also see the appeal, despite the high cost. For everybody else, though, it is a bit of a stretch, financially. 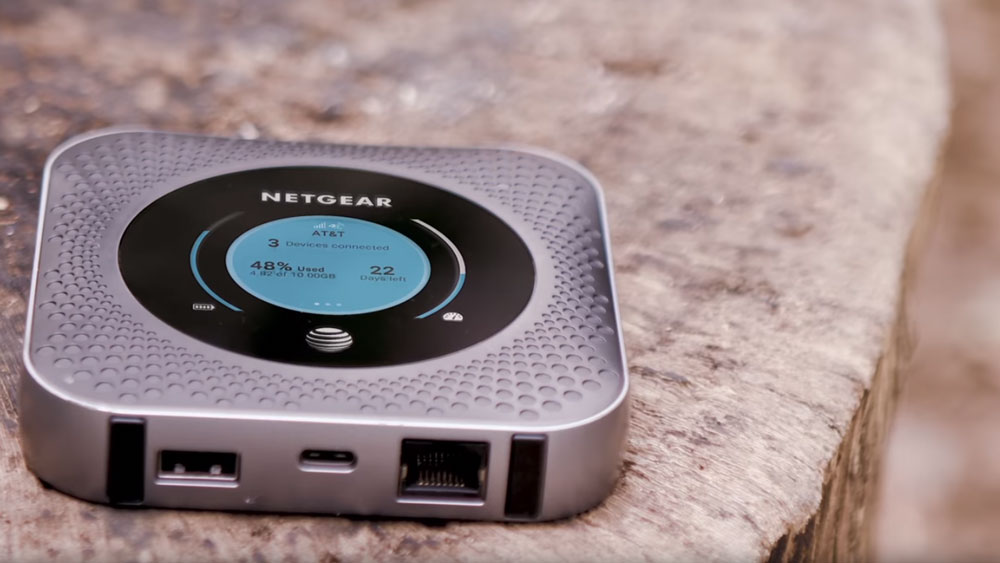 The key to the Nighthawk Mobile Router is speed. It has 4G LTE Cat 16 speed capability. By now, most people will know what 4G and LTE mean in some sense. But the Cat 16? As with any official standard, sometimes they get extended by 3rd parties. LTE isn’t really an official 4G standard, but it is accepted as a parallel standard which broadly mirrors true 4G. Within LTE, we have various speed categories, and we’ve now reached Cat 18. Cat 17 and Cat 18 are actually not consumer standards, so Cat 16 is the fastest practical speed available.

In theory, it means download speeds of 1Gbps. This is 1000Mbps or around 125 Megabytes per second download speed. However, there are no 4G networks currently delivering such high speeds. In the US, the average 4G speed is – brace yourself – about 30Mbps. Which begs the question, what is the point of the Nighthawk?

Despite average 4G speeds of the US being among the worst in the world, there are pockets of access which are much faster. In some areas, you may well get over 250 Mbps . The point of the Netgear is that it will be fast enough wherever you are, and will be future proof as 4G technology improves.

Design of the Nighthawk Mobile Router 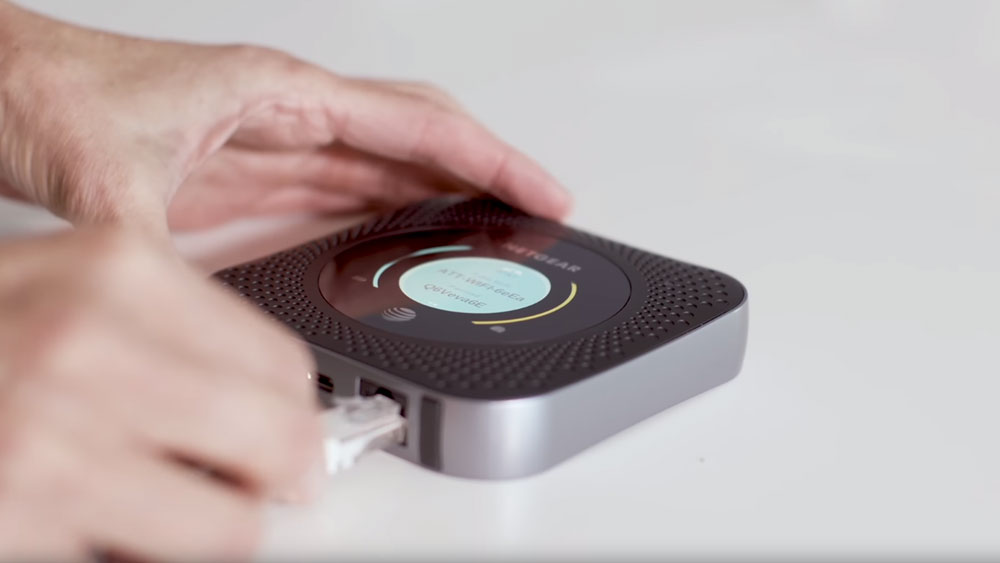 Slightly larger than the usual mobile hotspots we see it is, nevertheless, a nice looking device. Square, with a circular display screen in the center, and a couple of buttons, it looks very stylish indeed. The textured finish also adds to the feeling of a premium product. It is a little weighty at 8.5oz, but that is because the battery is enormous. At 5040mAh, Netgear reckon you’ll get 24 hours from a single charge, even if 16 hours of that is watching YouTube videos. That is a long way better than any smartphone will give you.

The only issue we have with the overall design is the lack of a touchscreen. Even basic mobile hotspots today have a touchscreen for common admin functions. The Nighthawk Mobile Router will allow some admin via button sequences, but most is done through a browser interface. This seems a little bit of a weak spot in the armory.

There are USB-C and USB-A ports for attaching other storage devices or offloading some of the battery charge to another device. There is also an Ethernet port for tethering to a laptop. 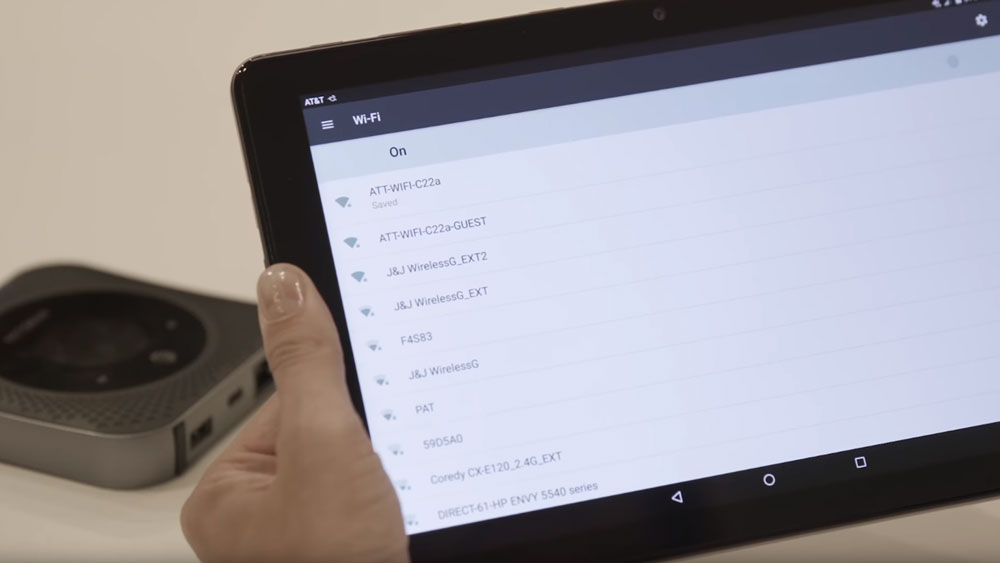 The hardware in Nighthawk Mobile Router is just about as good as it gets. Qualcomm are the best mobile modem maker around, and their X16 modem is the best they do. This makes the Nighthawk the best there is.

There is also true dual band WiFi 802.11 ac. The ac suffix is the fastest available WiFi speed at present, and dual band not only provides maximum capability, but also maximum speeds to those devices supporting the 5GHz band.

Having USB-C and USB-A ports is an excellent touch, and being able to transfer power to another device is also a good addition. The ethernet port is there if you need it, although we’d probably have preferred another USB-C port, given the restrictions of ethernet on the Nighthawk.

Software is also excellent. It is a bit of a pain needing to use a browser for all but very basic functions, but it is worth it if you need to do anything extra. If you’ve ever logged into your router at home, then you’ve seen how extensive your options for parental control, filtering and lots more are. The Nighthawk has all that a standard broadband router has, and the interface is clean and easy to navigate. 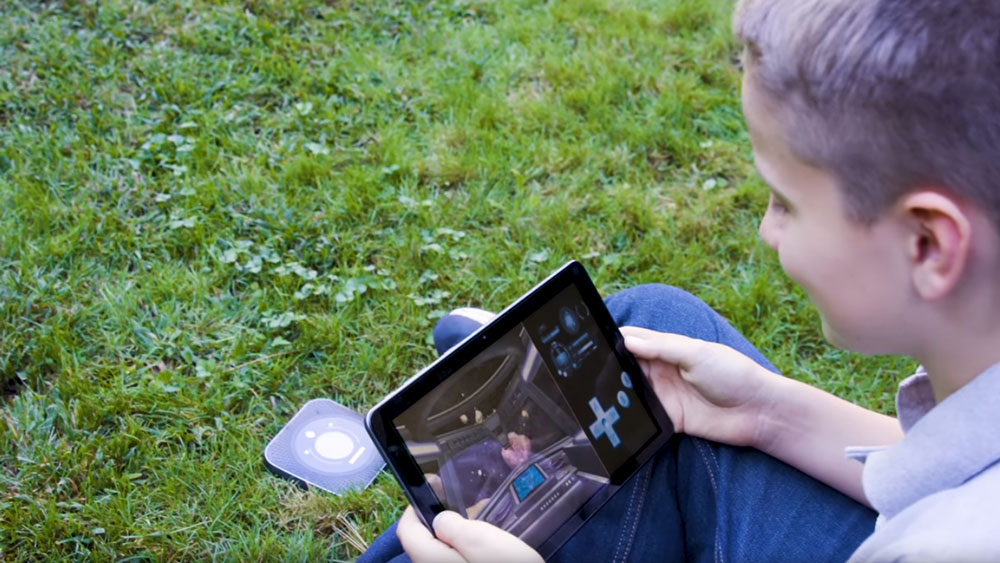 Seriously, what competition? There are other excellent mobile hotspots available, but none come close to the potential of the Netgear Nighthawk Mobile Router.

Netgear themselves do some great hotspots such as the Unite Pro or the excellent budget model the Express. ZTE also have the Velocity and Novatel have the Mifi 2. Both are very good performers, full of features. Both also cost a fraction of the Nighthawk Mobile Router.

But, if speed is king for you, then you need the Nighthawk. 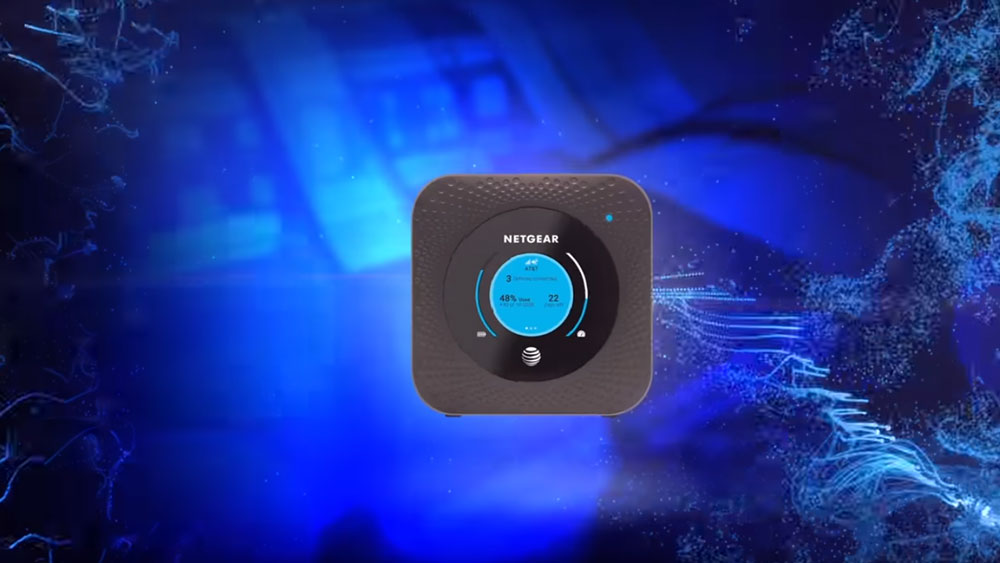 Yes it’s expensive, but is it overpriced? For some, yes, for others, possibly not.

The fact is that there’s nothing quite like the Nighthawk, so there’s not a lot to actually compare it to, like for like. It takes 4G to a whole new level, as long as your network supports Cat 16. Even if it doesn’t, whatever speeds you do get will always be maximized by using the Nighthawk.

Often the biggest problem with the Nighthawk is supply. At times, it is very difficult to get hold of, and this is keeping the price higher than it probably should be. Anybody who does get their hands on a few sell out almost as quickly. We have the same problem here at Mr Aberthon.

If we are out of stock when you check, and you want to be kept informed of when they land in stock, you can do so by dropping us a line.

Should I Buy A New Smartphone Online or In Store?