LG are another smartphone manufacturer who have been a big part of the market for many years. Their flagship phones can, at their best, rival anything from Samsung, Apple or anybody else.

Long time innovators, it’s almost a surprise when LG release a smartphone without some sort of brand new feature none of us have ever seen before. However, whether there’s a surprise in the specs or not, there’s no mistaking the fact LG produce solid, high-performing smartphones every single time. The new innovations LG suddenly produce aren’t always a big hit with users from day 1. But, eventually, we see those new features making their way into other brands, in one form or another.

This reputation for excellence and innovation filters down to the “standard” smartphones LG produces. Never, it seems, do they release anything that isn’t anything but impressive. 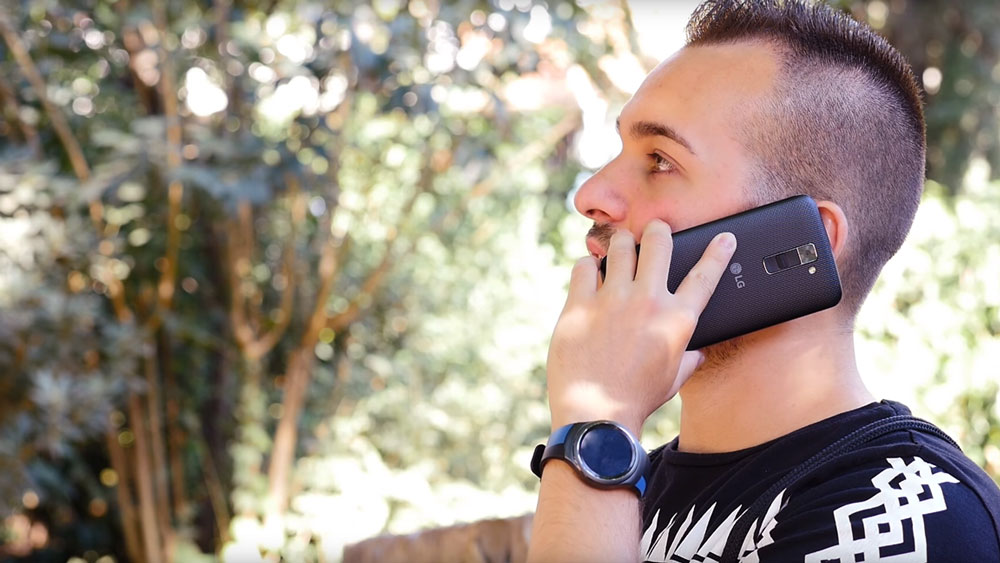 The K10 is something of a new approach for LG. Usually, each series in their lineup will have its own distinctive look and feature set. This time, with the K10, they’ve squeezed a mid-range smartphone into the same styling as their flagship G range.

Their is, though, one obvious difference, the display. At 5.3″, it is just about the biggest in LG’s non-phablet lineup. Best of all, it is on a device which is well below the 6″ overall size threshold at which the way we handle and use a smartphone needs to be reviewed. Having such a display on such a comparatively small device is remarkable.

But, is that enough? Is a big screen all that’s needed nowadays to impress users? The fact is that no, it isn’t. We now demand a great deal from our smartphones, and spend a lot more time on things like social media than we do watching movies or streaming video. This means that you can’t just throw a shiny surface on it and expect it to sell. The rest of the package needs to keep up. To see if the K10 manages that, we asked our team to take a look at what was going on underneath and report back. Below, you will see what they thought.

Scores For The LG K10 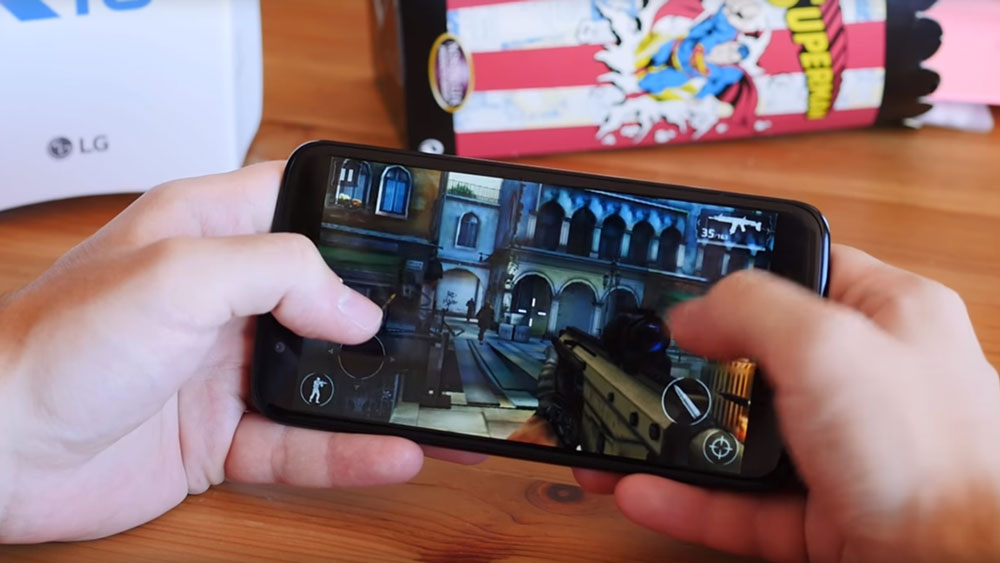 The overall score given by our experts for the LG K10 is 4.5/5. This is as a result of the individual score for each category below:

Any worries we had about the rest of the K10 not matching up to the big, bold display were soon put to rest. The K10, might just be one of the best “crossover” devices we’ve seen. Bigger than a smartphone, smaller than a phablet, it is idea as a multimedia device which remains truly portable in all circumstances. 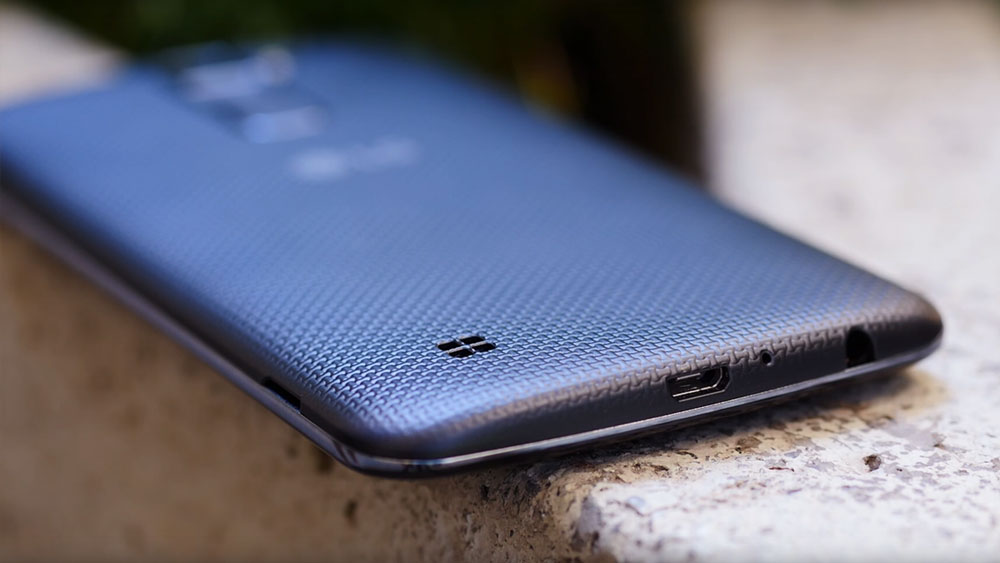 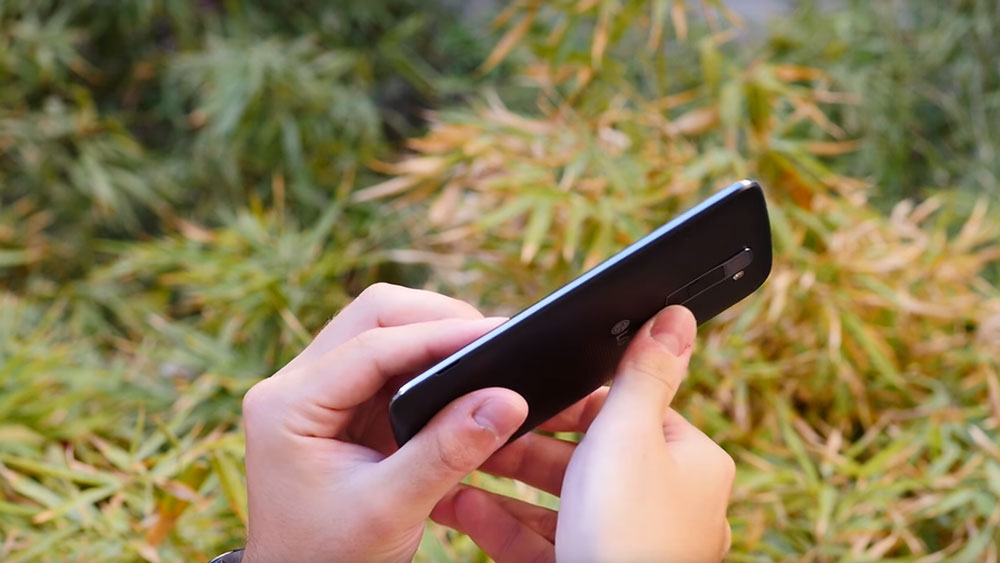 We mentioned in the intro to the K10 that LG have used the same styling as on their flagship G range, specifically the G4. This makes the back case just a little more rounded, which is important for a bigger than average smartphone like the K10. Remarkably, considering the size of the display, LG have somehow managed to keep the weight down to a mere 5 oz. Although a plastic body, it feels remarkably premium, and far more solid than its light weight might suggest.

The slight, 2.5 degree ARC gives the K10 a seam-free appearance, and adds greatly to the visual attractiveness of the phone. This “pebble” design has proved popular for LG devices, and we really do like what we see here.

The K10 is, no doubt, a good looking smartphone. On release, LG stated that they hoped the K10 would appeal to younger users as a media device, and so they took steps to keep it fresh looking. Whether it will appeal to younger viewers, we can’t say, not that it matters. Nothing about the K10 suggests for a second that it is anything but a grown up smartphone for grown up people. 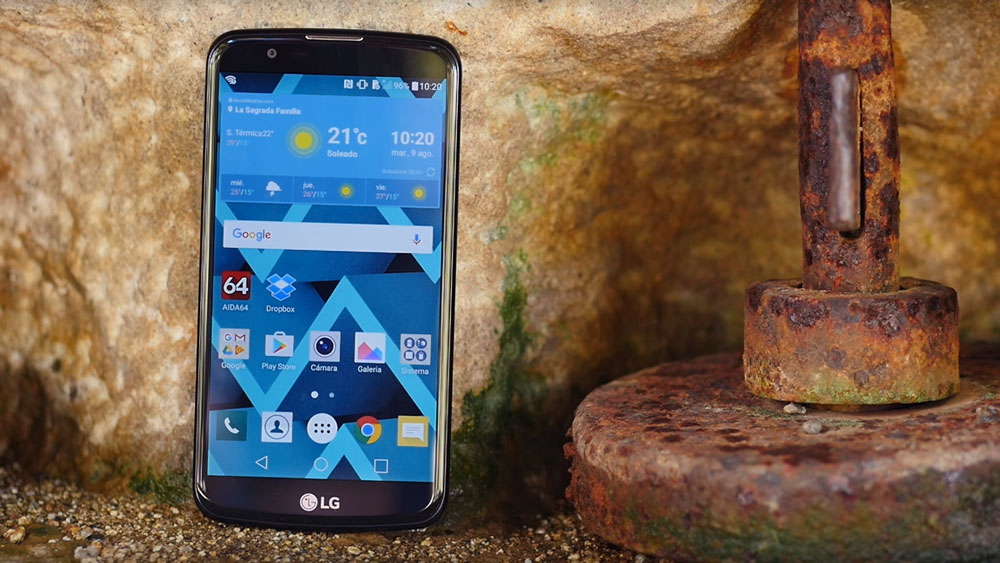 If you asked us outright, about the resolution we’d expect on a 5.3″ display, we’d always say 1080p Full HD. And so it was a little bit of a surprise when we saw how good the display of the K10 is, and then realizing it is “only” 720 x 1280 px. A 720p resolution is actually still the most common resolution in use today. We also now see, with display technology advancing rapidly, that display resolutions aren’t the make or break they might have been a few years ago. Yes, a 4K display is great, but resolutions below that level tend to rely on what manufacturers do with them, than actual pixel counts.

When running 4K video through the K10, the effect was amazing. Although unnecessary on a 720p display, we run 4K video to see if the phone can keep up with the extra demand from the quality. Which the K10 did, by the way. We also tried an SD 640 x 480 px video, they type your old TV used to show. The up-scaling done by the K10 made the low res picture better than it had any right to be.

Whatever LG have done to get this level of performance out of the K10 display, they’ve done a magnificent job. So, if you’re wondering why the display didn’t score higher, it’s just a couple of simple things which prevented a better score. We found that ultra-high contrast images lost just a fraction of sharpness. We should add that it’s unlikely that you will ever take such an image, but it is one aspect of how we test the display. In general use, the display is just great. The other thing is that there is no ambient light sensor. It’s a small point, but one which can matter. 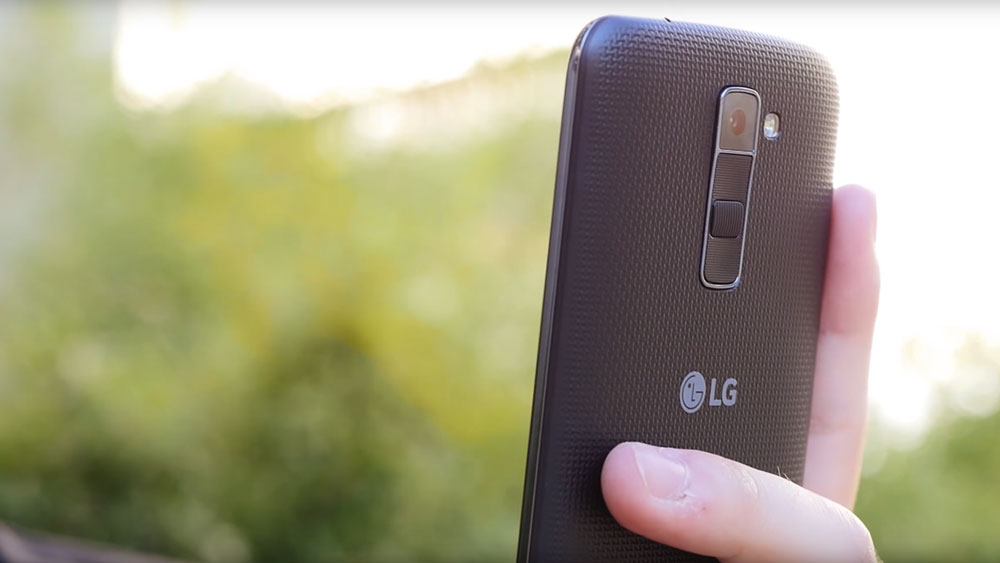 The rear camera on the K10 is 8MP, and the front 5MP. Both take images which put much of the competition to shame, with bright, punchy colors and great sharpness. But where the cameras really excel is with the app LG have provided. Sometimes, we see apps packed with options that 90% of people will never use. This time, though, LG have packed the app with options that aren’t just useful, but may well turn out to be essential.

Both cameras can record 1080p Full HD video, both allow the pausing of video recording, and also allow a still image to be taken without interrupting the recording. We do see more of these things on smartphones now, but they are usually limited to the rear camera. To have them on both is an excellent development. Both cameras also have GeoTagging available. If you are travelling, it can often be difficult to remember exactly where you were on any given day. With GeoTagging, the camera records the GPS data along with the image.

Images can be taken using a variety of methods. You can use the on screen shutter button, the volume key or, best of all, your voice. At first we were skeptical about the use of voice recognition for taking photos, and whether it would even work. Not only does it work, but we really wish every smartphone had the feature. With the front camera, you get the “white screen” selfie light, and can take pictures using gestures. All this makes for a terrific experience with the cameras. 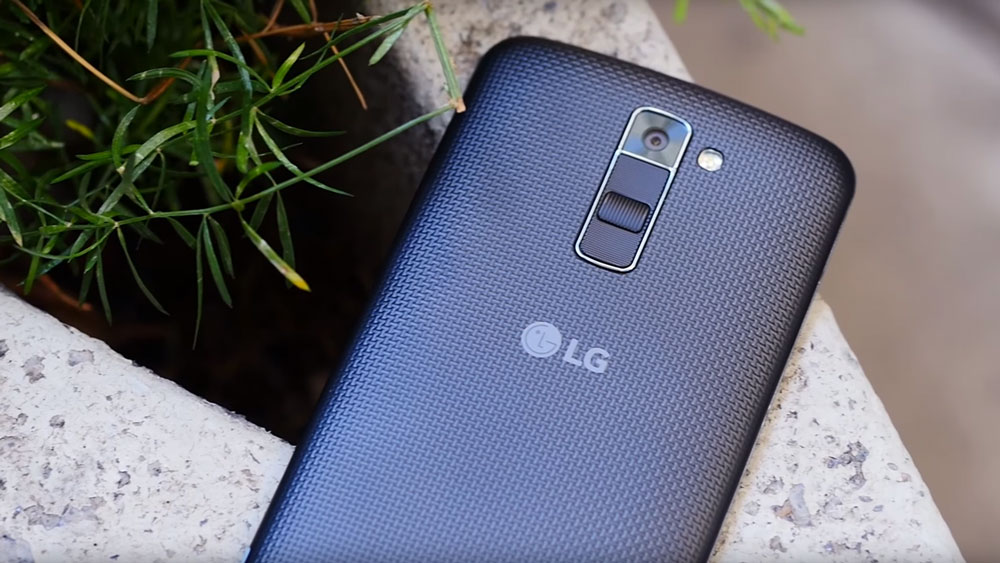 The quad core processor performs admirably, even under extreme pressure. There is 1.5GB of RAM memory which does okay as well. Internal storage is 16GB, with the option to add up to another 32GB in the MicroSD card slot.

The battery is also a very good performer, with 13 hours of talk time and 20 days of standby. Only after subjecting the K10 to really heavy pressure, beyond what it would face in normal use, did we start to see a noticeable dip in battery life. 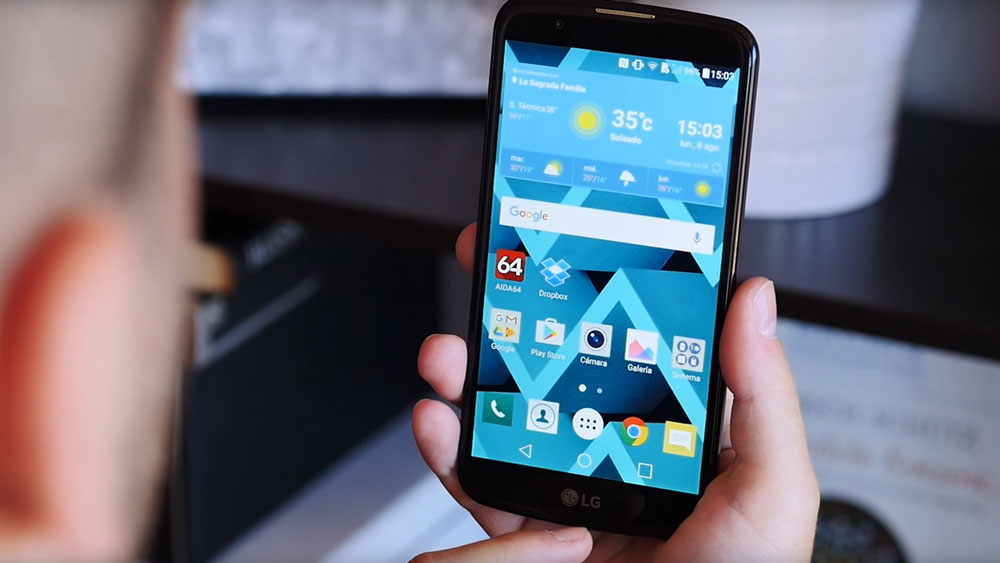 With the K10, you get LG’s, frankly wonderful, UX 5.0. It adds a tone of useful stuff to the Android installation, including extra security and more. There’s LG’s QuickMemo feature which lets you write or draw on just about any screen.

There’s also a clip tray, where you can put anything you want, and bring it up at the bottom of the screen whenever you need. This is a great way of storing a collection of information or data which you can then easily send in an email or text.

The K10 is the only device in this particular range from LG, so it would have been easy for them to get the specs wrong and produce a horrible white elephant. Instead, they did just about everything right. Form the display size to the design of the K10, LG have produced a marvel of a smartphone. And one which deserves all the plaudits it gets.