LG are among the most innovative smartphone manufacturers around. Where many follow, it is usually LG at the front trying out new things. This review of the LG G4 will explain more!

Some work well, some not so well, but the company deserve a lot of credit for never letting the rest of the industry get too comfy. As part of that strategy, we have the G4 smartphone, the flagship of the LG range. The G4 was something of a triumph at the time of its release in 2015. For the first time, LG truly challenged Samsung , Apple and the rest. Before that, although the innovation was there, performance was adequate but not exceptional.

But, 3 years on, is the G4 still a competitor? We gave it to our smartphone experts to see. Read our review of the LG G4 to find out what they say!

When something is given the “flagship” tag, certain expectations immediately appear. Performance, looks and top specs on the display and cameras are usually top of the list.

On paper, the G4 plays all the right notes. But is it playing them in the right order? At Mr Aberthon, we do demand more from any flagship device than we’d expect from a device further down the list. We do make some allowances for a device which is now 3 years old, but we would also still expect it to be as good, if not better than most mid-to-high end models from most manufacturers.

Scores For the LG G4

The overall score for the LG G4 in this review, as determined by our team at Mr Aberthon is 4.2/5. This is broken down by category below.

4.2/5 is a very decent score for a smartphone which is now 3 years old, and which has been superseded by three further iterations of the G series. In the main, the G4 proved a very capable performer, and still worth consideration today.

The G4 isn’t quite so “sharp” in design as some LG smartphones. However, it still looks great, and has a nice grey textured back. The rear case is curved slightly, which provides a nice feeling in the hand, even for extended periods.

There’s no great revolution in the design of the G4, with the possible exception of the shape of the display. If you look at the G4 side on, you will see a subtle, but definitely noticeable curve from top to bottom. This is to make sure that the display looks the same all the way up and down. Often, smartphone displays only look their best from a single angle, with colors appearing differently in different areas of the screen, according to your line of sight. The curved screen fixes this pretty well, and is a good idea that more makers should employ.

The curve actually extends to the case itself, making the G4 a little thicker at one end than the other, and providing the best feeling of grip possible.

There’s certainly nothing to complain about from the design and build quality. It’s nice looking, it’s solid and it feels great.

With a 5.5″, Quad HD display, you’d be entitled to believe that the display is decent enough to make any use of the G4 a good one. And you’d be right. It’s an IPS LCD display, rather than the more common Super AMOLED used by Samsung and others. This can mean that blacks aren’t quite black due to all pixels receiving power constantly. The resulting lack of contrast can be disappointing, but there’s no sign of it here. Whatever LG have done to get the best from the display, it has worked wonderfully well. Colors and sharpness are crisp and vibrant, without being overdone, and contrast is as good as any Super AMOLED screen.

Why Quad HD and not 4K? Well, to be blunt, it really isn’t necessary on a 5.5″ display, and certainly not with a pixel density north of 500 ppi. The higher the number, the sharper the image, so it’s unlikely that a 4K display would actually offer that much more.

Movies and games all looked excellent on the G4, with smooth playback from the excellent processor and never a hint of tearing or other problems. 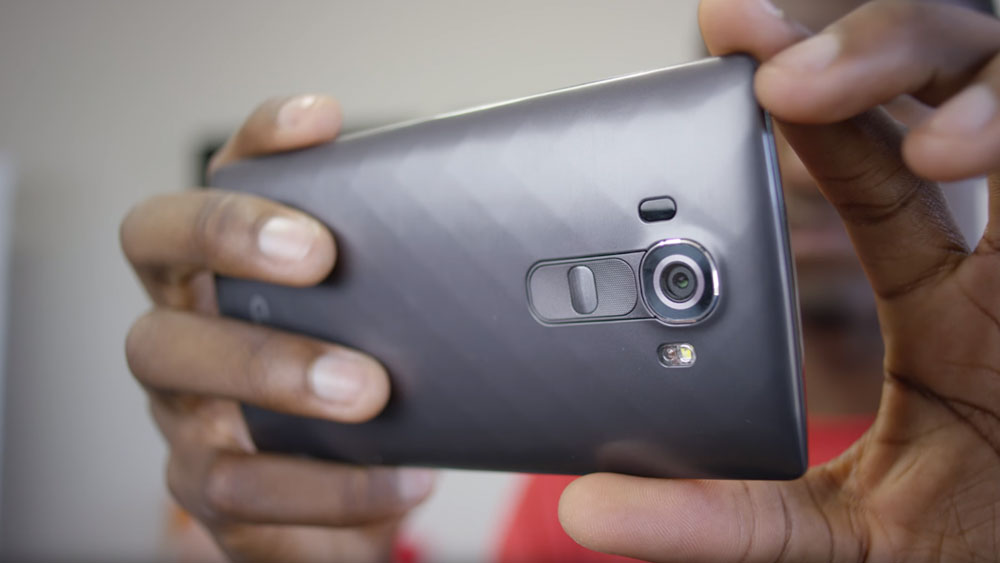 We’re quite happy to say that the rear camera on the G4 is as good as anything anybody else has put on a camera to date. And we include Samsung and all their cameras in later devices. One big plus for the G4 is the f/1.8 maximum aperture. In short, the lower the f number, the more light hits the sensor. At f/1.8, there’s a ton of light being utilized. This means that even low light images are vibrant and crisp. They don’t have any of the nasty digital noise you often see in low light smartphone images.

A special infrared sensor sets white balance and exposure, and you also have image stabilization and laser autofocus. Without getting into too much detail, if you are a keen photographer, you’ll love the ability to shoot in RAW mode, producing the Adobe standard DNG files. All in all, this may be the best equipped rear camera we’ve seen. As a bonus, it also shoots 4K video.

The front camera is equally impressive. At 8MP, it outshines many rivals, and is very good in low light. Dark environments often prove too much for most front cameras, which generally lack flash, but the G4 copes very well. There are also selfie gestures available to avoid having to reach for the shutter button.

Mostly, we see smartphones sporting Quad Core or Octa (8) Core processors. The G4 is a little unusual in that it has a Hexa (6) Core setup. In effect what this does is give outstanding performance, but only up to a point. Push the G4 too far and it will start to drag a little. Admittedly, we had to push it further than you’ll ever need to in real world use, but we’d have preferred LG to go a little further. However, just to reiterate, the G4 is blazingly fast in normal use.

Battery life is also very good. LG claim 20 hours of talktime from the 3000mAh battery. Tests showed the G3 didn’t get that far, but it outpaced anything else it was up against by some distance.

The G4 is quick and reliable which, if we were all honest about it, is half the battle.

Usually, this is where we complain about how much bloat manufacturers add to their smartphones. This time, we’re going to let it pass. There is some, but not much, and the fact that the G4 uses the fabulous LG UX interface really makes up for it. LG add a ton of useful features to the stock Android through UX.

You have a smart cleaning tool to free up space. You can have the option to run two apps at once, in a split screen mode and you have smart settings. This is where you can set up tasks to automatically activate on certain conditions. For example, connect bluetooth headphones and your music app can start. You can ask the G4 to change the sound profile based on your location, This is handy if you want to run a quieter profile in your home. A great option is to turn off WIFi when away from home. The constant searching for WiFi can take a lot of juice out of the battery, so it’s an incredibly useful feature.

The G4 might be 3 years old, but you’d never know it. It still performs wonderfully and is still a match for any smartphone out there. As it happens, it may well be LG’s best G series phone up until the recent G7 ThinQ was released. That says something about how good it is.

The UX is also the best manufacturer interface available by miles. make no mistake, the G4 is one darned good smartphone.