For years, technology “experts” have been telling us that smartphones will replace desktop computers. They won’t, however.  Regardless of how good the technology is in a modern smartphone, there are still some things they don’t do too well. Image editing, for example, is still pretty rudimentary. Yes, the likes of Adobe have apps available, but they will never match the productivity of a big 32″ 4K monitor. Likewise, spreadsheets and word processing also have limits before they get tricky to use. 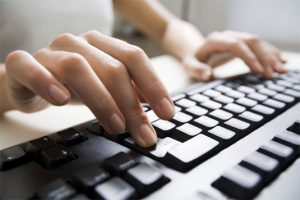 Trying to write an essay isn’t like trying to write a text or tweet. This article, for example, would be much more difficult on a smartphone than it is on that 32″ 4K monitor I mentioned. I can scroll up and down easily, I can also copy and paste whole swathes of text in less than 2 seconds. Best of all, I get to use a real, very useful, hardware keyboard. It’s cordless too. Solar powered, in fact, so there’s no charging leads or other restrictions to where I use it.

Yes, as great as smartphones are, full size hardware keyboards will always be better than an on-screen touch keyboard. But what if you could have such a keyboard with your phone? Well you can. And it isn’t a recent thing, either. In the early days of tablets, it soon became obvious that hardware keyboards were a good idea. So, seeing as how tablets are really just great big smartphones, why shouldn’t phone users also take advantage?

You can argue that a full, or even a midi-sized keyboard kind of defeats the object of the smartphone design. After all, when we strive for minification, don’t larger keyboards fly in the face of that? They do, to an extent, but what if you need to create a document at short notice? Is it easier to carry a laptop everywhere, just on the off-chance you might need it, or to carry a lightweight separate keyboard which tucks easily into a bag and weighs next to nothing?

What To Look For

For connecting wirelessly to a smartphone, Bluetooth is really the only game in town. There are other, quite device specific, options, but Bluetooth brings both portability and cross-platform convenience.

In addition, there are a couple of different design types to choose from. The first is the midi-size keyboard. This usually has full size keys, with media keys on the top row. F keys double up with the media, and  are usually accessed via a Function (Fn) key. What these keyboards lack, as do most portable designs, is a number pad. The reason is simply one of size. Full size keyboards with a number pad are up to 18″ wide, which makes them too large for portable convenience. The compromise is to lose the number pad.

In the last 2 or 3 years, there an acknowledgement that carrying any keyboard needs to be as convenient as possible. As a result, we are seeing more and more folding keyboards. These are usually hinged either down the middle or at points 1/4 of the width in from each end. It makes them a little thicker that a standard keyboard, when folded, but the do fold down to a size barely larger than the phone itself.

Battery life might be a consideration, so check what the manufacturer claims for the time between charges. Having a portable wireless keyboard is pointless if, when you need it, there’s no juice in it. The good thing is that most tend to preserve the charge even when not in use for extended periods. 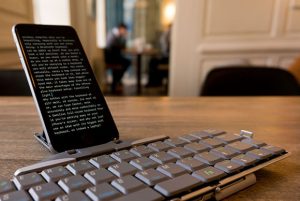 Folding keyboards are an excellent idea if you find yourself working on airplanes, trains or wherever. They require a little bit of an adjustment to if you are more familiar with a PC keyboard, but are a great standby. Bluetooth also means almost instant connections, and very good responsiveness.

So useful are folding bluetooth keyboards, in fact, that you will never hear anybody complain about owning one of these things.

The other, slightly more polarizing option is the roll-up keyboard. Made entirely of silicone, and often entirely waterproof, roll-up keyboards are one of those love ’em or hate ’em things. In  use, they can be very frustrating, as it can take a fair bit of pressure to get the keys to respond. This is especially true, for some reason, on the top row of keys. Some models perform better that other sin this regard, but it’s still a bit hit and miss. You also need a flat surface at least as big as the keyboard. No balancing on a knee or using one handed here.

As a core accessory, roll-up keyboards are still a way off. As an emergency keyboard which can be left in the car or at the bottom of a bag, though, they can be very welcome.

With all Bluetooth keyboards, connecting them to your phone is the same as with any similar accessory. Just go to the Bluetooth settings on the phone, turn on the keyboard and set your phone to search for new devices. The keyboard will usually have an obvious device name so it is easily identifiable. If not,the user manual should tell you what to look for. Once connected the first time, the keyboard should then connect as soon as it is turned on and within range.

These are some of the more highly rated portable keyboards that have surfaced in recent times. 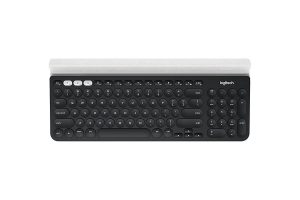 The only truly full-size keyboard worth its salt is the Logitech K780. Make no mistake, it’s expensive, running at around $80, but it has a number pad which will please those who need it. Yes, it’s also a little on the big side because of the number pad but we include it here simply because it is so good.

The K780 also includes a built in stand for your phone/tablet, which not all do. If you think it might be a little big, have a look at the smaller K380. It’s very similar, minus the number pad. 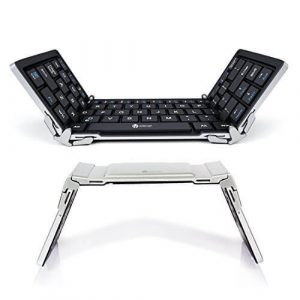 Most bluetooth keyboards use plastic as the base material. The iClever goes a different way with aircraft grade aluminum. It adds slightly to the weight, but not so much that it’s a problem. The iClever folds into a package just 5.7″ x 3.5″ x 1.2″, almost as small as the average high end smartphone. It also weighs only 6.5oz, despite the heavier materials.

The iClever keyboard looks great and works perfectly. It has stated 11 feet range, and a 40 day battery life, neither of which are to be sniffed at. To get the best out of the keyboard, it loads different software depending on the operating system it is connected to. 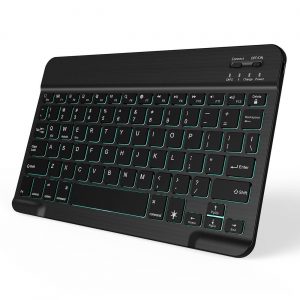 One thing we haven’t mentioned yet, but which is massively useful is a keyboard with a touch-pad. Now, on laptops, touch-pads are dreadful things, which is why everybody buys a wireless mouse. As part of a foldable, bluetooth keyboard, though, they are a huge bonus. Having to reach over to tap the screen on your phone is just a pain, but the Jelly Comb takes all that pain away. Or almost. The touch-pad doesn’t work on iOS devices. Blame Apple for not allowing access to that part of the OS.

If you are on Android, though, the Jelly Comb is a great choice. Less than 6″ high and only 0.7″ thick when folded, just tuck it into a pocket in your bag and leave it until you need it. On 2hrs of charging time, you’ll get 25 days of standby, which is pretty impressive. 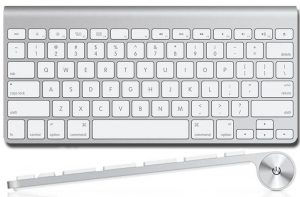 Shockingly expensive at $99, it’s a good job the Apple Magic keyboard is very good. Almost $100 good? Well, that’s for you to decide. We do know that just a few minutes of charging will provide a full days use. We also know that it works seamlessly with any Bluetooth-equipped Apple device from desktop to iPhone.

As you’d expect, the build quality is excellent, and using the keyboard is a great experience. However, it isn’t without its drawbacks. There’s nowhere to put the phone or tablet, so you’ll need to use something else to prop it up. It also has all the electronics packed into the top of the keyboard, which means it isn’t as thin as many others. If you are an Apple fan, and like to stay loyal to the brand, it’s a good choice but not great? There are better keyboards available, especially when you take price into account.