There are many reasons why you might prefer to wear your phone on your person. To wear it rather than simply carry it in a pocket or purse. You might, for instance, be in a noisy environment where you need to hear it if it rings. Or, you might be in the gym or out running on the street. Whatever the reason, here we take a look at the best ways to wear your phone. 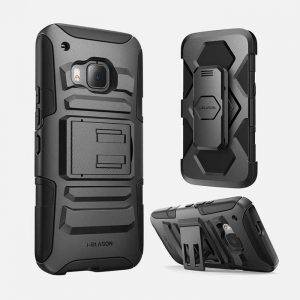 Okay, so a belt clip might not be the sexiest way to carry a smartphone. But it’s been around longer than anything else. It is still a quick and simple way to enable easy access to your phone on the go.

Belt clips have actually come a long way from the days when they were made of fake leather with a clear plastic flap so you could see the display of your Nokia 3310. Many now use modern materials like neoprene or even carbon fiber. Most also providing a level of protection to avoid the inevitable damage when you bang your hip against a table or car door.

Some also double up as a desktop stand, making it a little more practical than most. They also provide something of a new lease of life for this oldest of carrying methods. It proves that longevity isn’t as dead as you might think. Nowadays, though, most clips are model-specific so make sure you buy the right one for your phone.

Ideal for those who spend a lot of time running or cycling but who need or want to take their phone with them. Phone belts go a step further than the likes of fanny packs, which most of us have used to carry our smartphones in. The issue with fanny packs and similar wearables is that they’re not secure enough to stop the phone getting banged about with every step. Dedicated phone belts are designed to keep the phone as close to your body as possible. They thereby remove most of the bouncing about they are normally subjected to.

Phone belts designed for purpose also have some degree of moisture protection built in. When exercising, your body produces an incredible amount of heat and moisture. It is therefore important to have your smartphone stored somewhere away from the worst of it.

Some phone belts have a plastic pocket for your phone. Others have a waterproof back to the compartment and a breathable front. Both do a good job of protecting the phone. They also often have earphone entry points through which you can feed the cable and listen to your favorite running tracks. 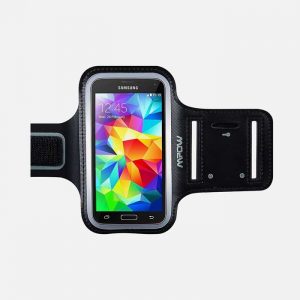 The original gym accessory for smartphones, the armband is still a treadmill staple for many. It used to be little more than elasticated bands to grip your phone like a drowning man to a lifebelt. Armbands have now evolved into something far more appropriate for the job.

Most armbands are still elasticated, with the band itself fastening using velcro. Although many on sale will specify a particular model of phone, the fact is that they will all fit more than one model. Your choice more or less is limited by where the headphone socket is, if you like to listen to music whilst working out.

Armbands don’t suit everybody, because adding 6 or 7 ounces to one arm can prove surprisingly distracting if running at some pace. But they are a great accessory for casual to moderate exercisers.

Whatever your choice, it’s comforting to know that there is more than likely at least one to suit your particular smartphone. There are also tons of designs and colors to choose.