The Caterpillar company have their origins in tractors and farm machinery. The Caterpillar name came from the first use of a continuous track around the wheels used to drive the vehicles. The company expanded first into the wider farming and construction industries, into military vehicles and then into electronic guidance systems for agricultural vehicles. Caterpillar then began offering their own finance and insurance terms to buyers, rather than through a 3rd party finance company. Eventually, the company started to license the Caterpillar brand to other products. Now, we see products like clothing, boots, watches and, of course, mobile phones.

The first Cat cell phone appeared in 2012. All Cat phones are made by the Bullitt Group, a company specializing in manufacturing products under license for global brands. The Cat range was designed and developed to match the reputation Caterpillar already had for producing tough products. As a result, the phones produced all have high levels of protection built in, together with features specific to heavy industry uses. 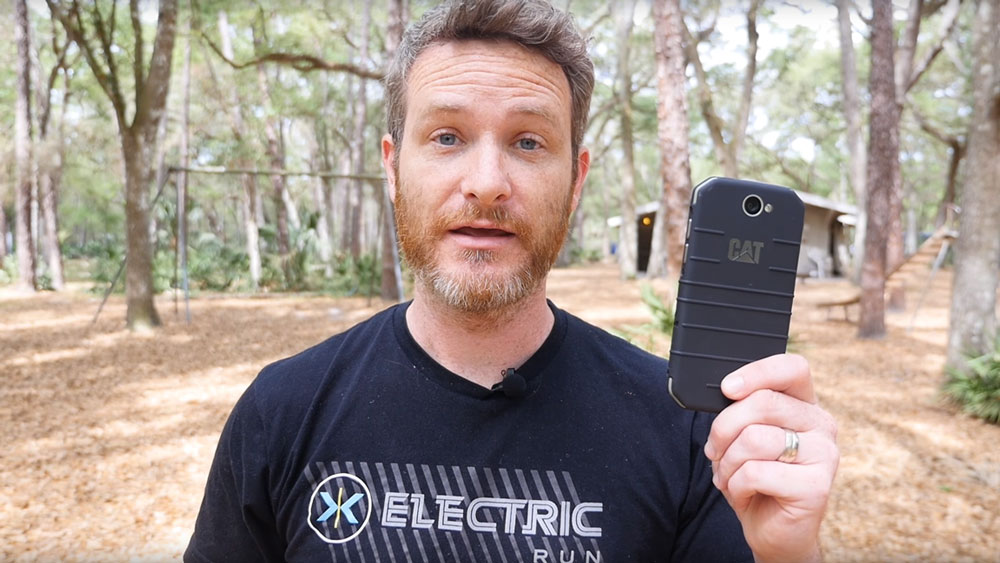 The S3x range of Cat phones is aimed at the mid-range smartphone market. The S31 incorporates all the rugged features of the flagship S6x range. The S31, though, has a greater emphasis on affordability and appeal to everyday usage needs. It is still ideal for use in heavy duty workplaces, but the price allows it to better transfer to the everyday world of the average smartphone user.

Built to last, with IP68 and MIL-STD 810G protection, Cat have gone further than most to prove the S31’s durability. In most examples of rugged phones, manufacturers will claim MIL-STD 810G compliance without actually demonstrating it. There are no rules for testing smartphones against the standard, so manufacturers are left to do their own tests. Although the MIL-STD 810G standard does expect minimum requirements to be met, manufacturers rarely release actual test results or offer limits to the various claims.

Cat, though do provide testing specs, which makes it much easier to establish exactly how tough their phones are without finding out too late.

To find out whether the Cat S31 smartphone is a viable smartphone for general use or if it offers a lot more, as Cat claim, we asked our team of rugged phone testers to cast their eye over the device.

Scores for the Cat S31 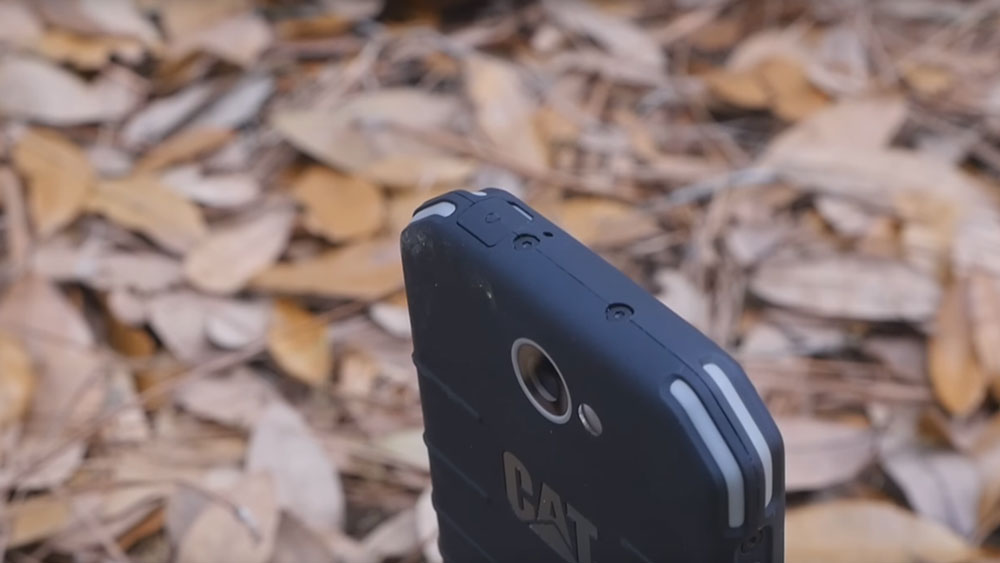 Our reviews team awarded the Cat S31 a score of 4.5/5. This is an average from the categories below:

Our team were unanimous in their praise for the S31. The overwhelming view was that, although perhaps a little more pricey than most mid-range phones, the S31 is worth every cent. 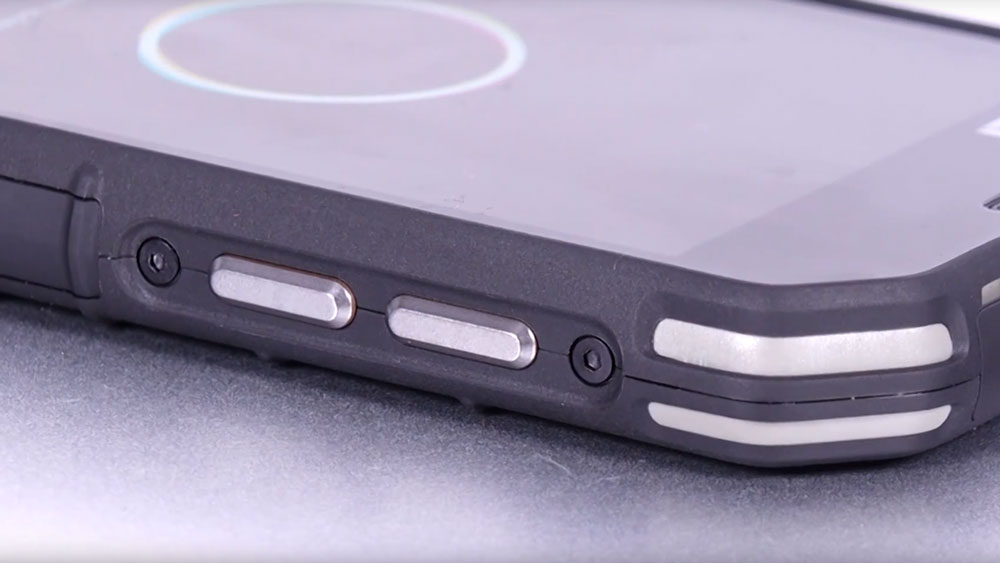 Often out of necessity, rugged phones lack some of the sleekness of many smartphones. After all, if you’re going to survive being dropped from 6 feet onto concrete, you will need some design changes. The squared off corners of the S31 case goes a long way to add the protection needed for those drop specs. Unfortunately, they also make it look just a fraction industrial. The S31 is an industrial phone in many ways, of course, but it does mean that it becomes a decent, but not great, looking smartphone.

The back case has grooves cut into it, which don’t offer a great deal with bare hands, but make a difference when wearing gloves. The deep grooves make gripping the S31 with think gloves on, far easier. In honesty, they’re substance over style, but we’re actually okay with that. Better a smartphone is usable and a little plain, than having Hollywood good looks and being impractical. The overall feel of the S31 is one of solid chunkiness. It’s a fair bit thicker than any non-rugged smartphone, but that is a good thing.

We’d probably describe the looks of the S31 as “striking”. Whether this is good or bad will depend entirely on your personal taste. We will say, though, that we grew to like the look a lot. At first glance, it’s a long way removed from the likes of the Galaxy S9 or the iPhone 8, but we still ended up liking it just as much. 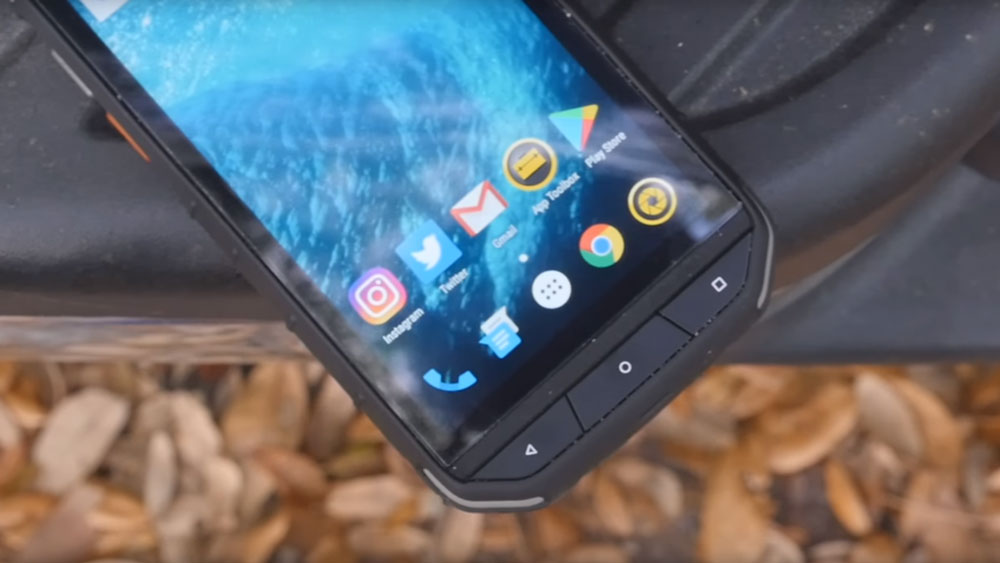 It’s difficult for smartphones to protect their display for any length of time. Often, whether the display survives any kind of drop is down to pure luck, rather than by design. Even those phones claiming to be drop resistant usually don’t instill a huge amount of confidence. With the S31, though, it’s all very different. Try dropping a smartphone onto concrete, and the sickening crunch of metal and glass will make your hair fall out. When we dropped the S31 from 6t onto the tiled office floor, there was a dull thud and a small bounce, but no more. It landed face down, so there was that momentary reluctance to pick it up and turn it over. When we did, though, there wasn’t a mark anywhere. That we were impressed doesn’t begin to tell the story.

As for the actual display quality, the 4.7″ size has a 720 x 1280 px HD resolution. Given that Cat probably never meant for the S31 to be a specialist media device, the resolution is more than enough. Clarity and color is excellent, and it has a couple of tricks up its sleeve for use at work or in extreme conditions. There are a few smartphones which have a second level of sensitivity built into displays for use whilst wearing gloves. Usually, this means gloves that are fairly thin, and not as used in industrial environments. The S31 claims that wet hands and any type of glove offer no barrier to using the display. In tests, we found that very wet hands made absolutely no difference, the touchscreen responded every time. Even more impressively, we couldn’t find a pair of gloves thick enough to prevent the screen recognizing touches. 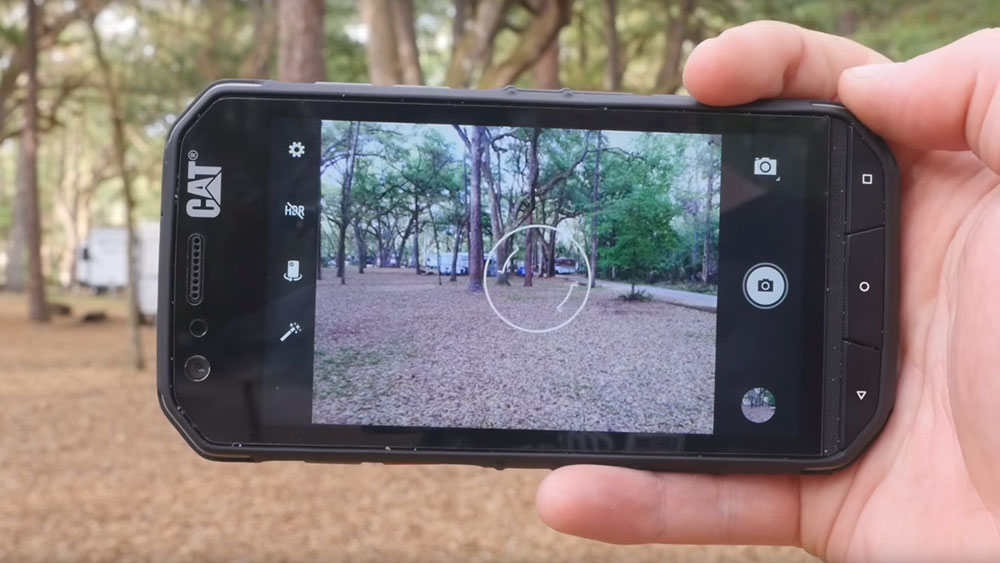 When we saw the specs for the cameras on the S31 – 8MP rear, 2MP front – we initially lacked a little enthusiasm. But that was before we used them. The front, 2MP camera is pretty basic, admittedly, not being able to record video. But, the images are a different matter. They were up with the best we’ve seen from a camera at 2MP or less. The rear camera, again, not the best in terms of features were also excellent. It looks like Cat have recognized that the S31 camera may well be used for inspection or evidence purposes, and so they have made sure to use quality components.

Colors and sharpness were excellent, and the LED flash performed very well. Being able to record 720p video is also a great addition, for the same work-related reasons. Perhaps the camera isn’t the pro experience some might want, but it’s easily good enough to impress. 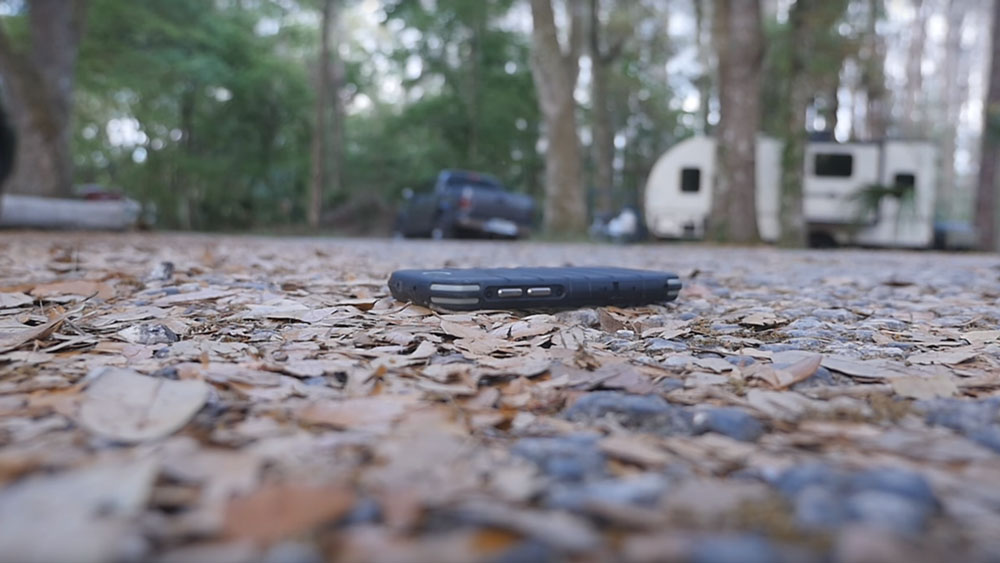 We’ve already talked about the strength of the display protection on the S31, but the things Cat have done to make the phone a true rugged device are very impressive. The S31 will also remain operational in temperatures ranging from -22 to 131 degrees Fahrenheit. At such temperatures many smartphones will have long given up, and their batteries sucked dry. As well as great drop protection, the S31 also has protection against physical shock. Technically not the same thing as an actual drop, sudden shock G forces can actually be much greater than impact from height.

The S31 is also dust proof, and will withstand submersion in up to 6 feet of water for 30 minutes.

There’s no doubting the ability of the Cat S31 to survive almost any environment. In all honesty, the phone may well outlive us all. 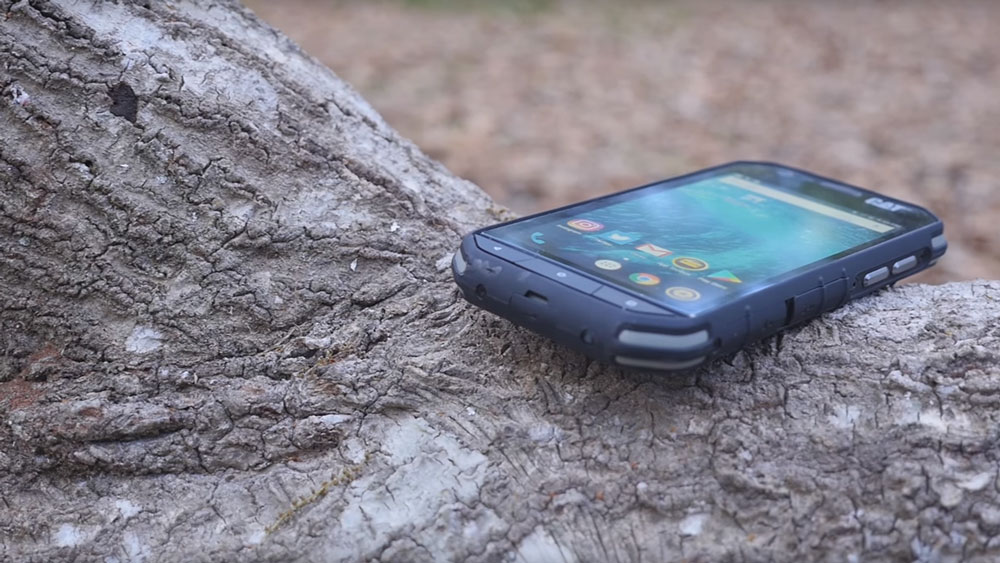 We’d assess the overall hardware standard as upper mid-range. A good Quad core processor does it’s job well, and there’s 16GB of internal storage with a Micro SD card slot for up to a further 128GB. You get 4G, Bluetooth, Wi-Fi  and GPS, which isn’t always the case on rugged phones. Having them means that the S31 is capable of being a good smartphone without the extra protections Cat added.

The huge 4000 mAh battery gives 30 hours of talktime, which is about twice the average for any smartphone. It will also sit in standby for 38 days. This battery life is essential if you are in an environment where charging point won’t be right next to you, possible for days on end.

There’s also an ambient light sensor, which controls the screen brightness for all environments. In bright sunlight, the extra power built in by Cat kicks in and ensures the display is still easy to read.

Following on from the above comments about wearing gloves, admittedly, we didn’t have truly heavy duty gloves available, but even the thickest skiing gloves we had worked okay. Multi-touch wasn’t quite so accurate, but it’s unlikely you’ll need them in circumstances in which you’re wearing high-end protection on your hands. 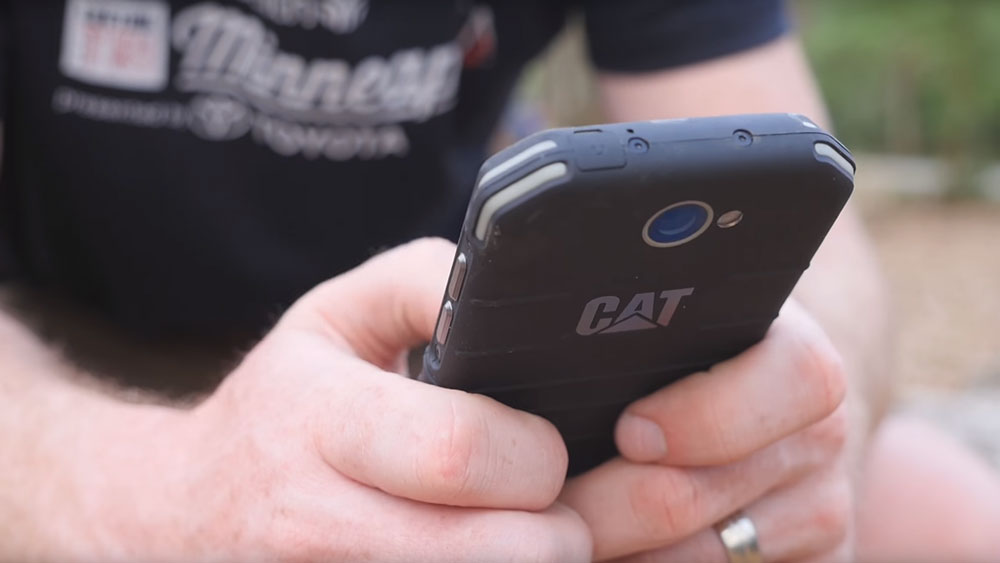 First, the best thing about the S31. Cat haven’t added anything you don’t need. You get an almost-stock Android which provides a fast, slick experience. This, again, is a nod to the industrial intentions of the S31 target audience.

The S31 ships with Android 7. As yet, Cat haven’t announced any upgrade possibilities for the phone, which is unusual. It’s quite possible one may appear in time but, no matter if it doesn’t, Android 7 is a great version of the Google OS.

If you work in construction, oil or any other heavy duty industry, the Cat S31 is one of the best choices available. In fact, it may just be the best bang for buck rugged phone available.

It’s survive almost anything, and has specs more than high enough to give a great smartphone experience.