Camera Add-ons For Your Smartphone 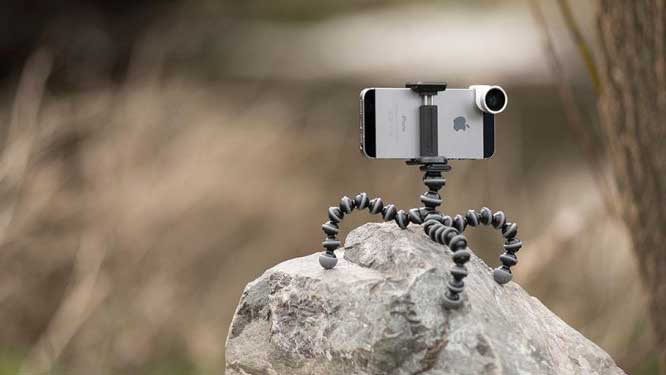 Smartphone cameras have improved immeasurably in recent years. Yet there’s still a limit as to what can be achieved with the small sensor size and often limited user control. There is, though, a thriving industry built on providing add-on accessories to improve the smartphone camera experience. It includes lenses and other gadgets readily available at a wide range of prices.

For whatever reason, iPhones seem to be much better supported than Android phones. It is possibly due to the vast array of Android phone sizes and camera locations that need to be taken into account. While iPhones only change from release to release. Anyway, here, we take a look at some of the best add-ons you can buy. They will help you to become the next Ansel Adams (google him and learn something good). 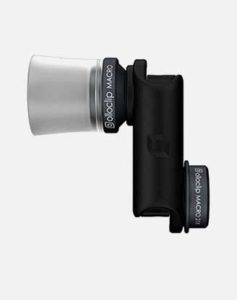 Although we usually do these lists in no particular order, we do feel that Olloclip deserves first mention, as it really is that good.

Designed for any iPhone from the 5 and up, Olloclip is a range of products that allows you to choose the best setup for your own needs. You can buy a single lens or a set. The lenses themselves come in a huge variety of configurations from fisheye to 21x macro. The quality, although obviously still dependent on the camera on the iPhone itself, is amazing. Best of all, the Olloclip weighs less than 1 ounce. So won’t add a ton of weight to your bag or pocket. Olloclips are not especially cheap, starting at around $50 and going up to $200. But if you’re serious about photography with your smartphone, they deserve your attention. 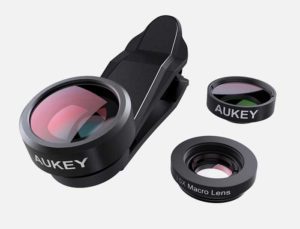 Aukey have a reputation for solid accessories of every type. They sell 12v in-car car USB adapters to all manner of Bluetooth gadgets. Here, we have the 3-in-1 Clip On Lens. It will give you a 198 degree fisheye lens, a 110 degree wide angle lens and a 15x macro lens. Each of which expand your photo armory considerably. Well built, and mainly metal and glass, the Aukey 3-in-1 Clip on will fit almost any smartphone. It is priced at an almost ridiculously low $15. It might not give you the pro quality of the Olloclip, but for the money, you’d have to be mad not to give it a go. 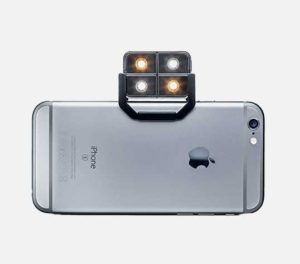 Away from clip on lenses, the iBlazr 2 LED Flash makes up for the often pretty inadequate flash that is built into even flagship smartphones. If you’ve ever tried taking video in a dark room, you’ll know what we mean. But don’t panic, because the iBlazr is here.

Don’t be fooled by the ‘i’ in  iBlazr, as this little beauty will fit any smartphone. It connects via Bluetooth, and works with the native camera app. Once connected, simply tap the iBlazr 2 twice. It will synchronize with the camera shutter to capture images with plenty of light to spare. The dual LED flash setup on modern smartphones only produce about 40-50 lumens of light. It is quite phenomenal that the iBlazr 2 can produce 500 lumens. Just to give you an indication of how good it is.

It can also run continuously for up to 3 hours on a single charge. So video shooting just got serious! If necessary, you can even connect multiple iBlazr 2 devices to your smartphone for multiple light sources. They will then all fire simultaneously. At less than $50, it’s a terrific buy for any photo enthusiast. 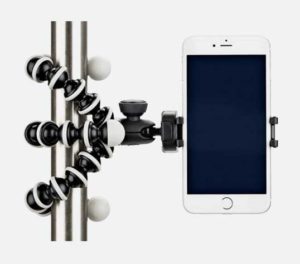 Joby revolutionised portable tripods with their original GorillaPod, and have carried on doing so ever since. Strong, stable and with its distinctive looks, the GorillaPod is possibly the most useful tool you can carry in your bag. Not only will it stand upright, and hold your phone securely in it’s powerful grip, but the flexible legs will wrap around a pole and grab onto it like a long lost son.

Being able to attach your smartphone to almost anything will add a new dimension to what you can do with it. At less than $40 it’s an absolute steal. 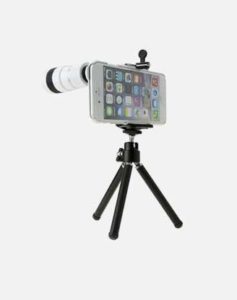 Back to lenses now, with the CamKix lens kit. It was originally designed for the iPhone 6 Plus, but it comes with an adapter that will allow it’s use on most smartphones. The kit has telephoto, macro, wide angle and fisheye lenses. As well as including a tripod, a phone holder, a cleaning cloth and a velvet bag.

Like the Aukey, the CamKix is aimed more at casual and occasional photographers. But it provides a wide range of options to suit almost any situation.

Another at under $40, it’s definitely worth considering as a smart addition to your smartphone photo gear. 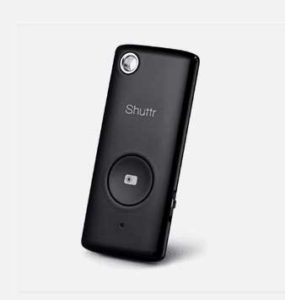 Any smartphone camera accessory lineup wouldn’t be complete without something to make selfies better. We couldn’t bring ourselves to include any kind of selfie stick, so we thought we’d mention the Shuttr. Any serious photographer will have a remote control in his or her pocket, and this is where the Shuttr comes in.

It is compatible with most recent smartphones. Bluetooth allows the remote to be used up to 30 feet away, triggering the native camera app as though you’d tapped the screen. There’s even a stand which plugs into the headphone socket, to keep the phone upright when used freestanding.

Yet another $40 marvel, the Shuttr is one of those things you don’t realize you need until you have it. You will then wonder how you managed before.