It’s probably fair to say that there’s only so much you can do with the design for a smartphone stand. But that doesn’t stop some from being great and some from being awful. Here we put style and substance on an equal footing. Let’s look at just a few of the different types of stand you can get for your smartphone. 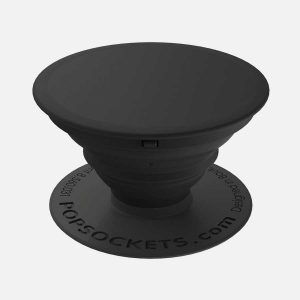 Popsockets have taken the smartphone stand world by storm recently. It feels like a million different designs including the ability to upload your own design, and a very simple concept. Yet less than $10 will get you what turns out to be a very useful sort-of-stand. We say sort of, because the Popsocket isn’t a stand as you’d expect in the normal sense. It’s actually more of a stick on grip for you to hold your phone for extended periods by attaching to the rear of the phone/tablet using a special material. It makes it much more comfortable for the user.

We include the Popsocket here, though, because an adapter is available which does turn it into a genuine smartphone stand. The adapter, it must be said, does use a single-use adhesive to fix it semi-permanently to wherever you want to put it. But it is very useful for a wall or in the car, where it can be left. You just clip the Popsocket into it when needed. It’s stylish, and it’s fun, and it’s also not going to bust the bank. 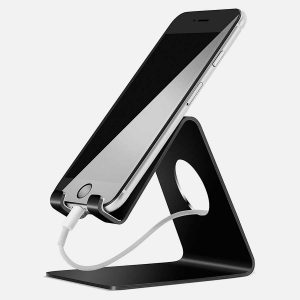 Comprised of a single piece of sturdy metal, the Lamicall does nothing it doesn’t need to do. Unlike too many stands of this design, the inclusion of a hole in the backplate through which to feed the charging cable makes it more useful than most. It also feels solid enough to withstand and drops and knocks without suffering any amount of damage. Your phone is held securely by the two arms on the bottom. The 4 soft pads prevent scratches to the rear case.

The Lamicall is also surprisingly stylish, despite effectively just being a bent bit of metal. You really do feel like you’re getting a lot more than your $10 worth. 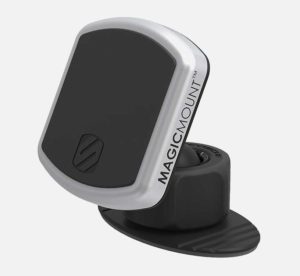 The MagicMount Pro takes some of the principles of the Popsocket. It adapts them to an all in one package which will stick securely to your car dashboard or other surface.

Like the Popsicket, the magicMount Pro uses a special adhesive to mount the stand. It is promised that this adhesive will leave no residue when removed, but will hold both the stand and your phone securely. The front plate is magnetic, and holds most smartphones very securely. Some smartphones do have a glass or other material for the rear case. Being magnetic, the MagicMount Pro is designed to hold onto a metal case.

It’s small, it’s quite stylish, and grips onto what it needs to do well. It is more expensive, at around $30, but is well built and efficient enough to be worth it.

A stand and wireless fast charger in one, the Seneo is at the higher end of stands in terms of its usefulness.

As long as your phone supports both wireless and Quick Charge 3.0 charging, you will get the full features of the stand. If, though, your smartphone uses a different fast charging technology such as the iPhone 8 does, then you will be restricted to the wireless charging function.

Smart looking and very versatile with the right phone, the Seneo is a great accessory for any qualifying smartphone owner. Again, it’s a little higher up the price ladder at around 30 dollars. But for a 3-in-1 stand which is as well made as this, it’s really not expensive at all. 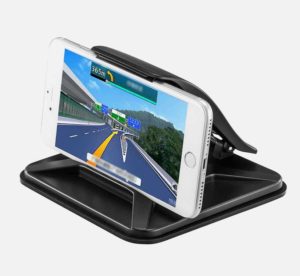 Designed specifically to be used in-car, you can actually use the Facoon anywhere. There is one point which makes this worth considering over similar stands – apart from the measly $15 price. It is that they provide 2 methods of attaching the stand to the dashboard. There is a suction cup of the type that is common for dash cams and the like. There is also the option of using the sticky silicone material that you see elsewhere for holding keys, change etc. in-car or in the office. The silicone is washable and reusable. You will need to do this periodically, as it also clings to dust and debris like a demon.

For the money, the Facoon is just about the best of this type of stand we’ve seen.