Best Phones For The Hearing Impaired 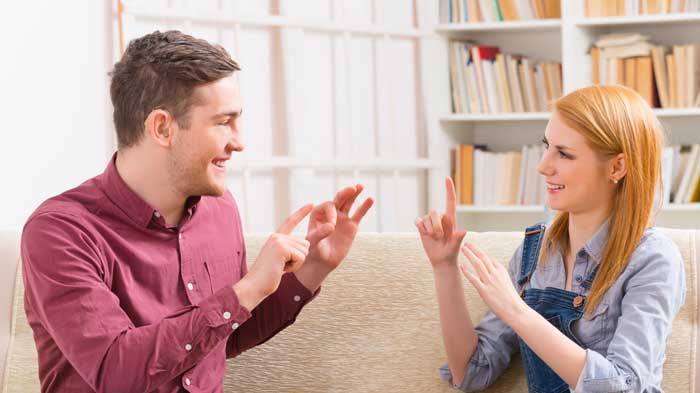 We’ve long had smartphones for those people with failing eyesight – larger buttons, high contrast color schemes and displays etc. But for those whose hearing is less than it might be, it takes a little more effort to find phones which are of any use other than for texting. Here, we take a look at some of those that are available and which do the job very well. 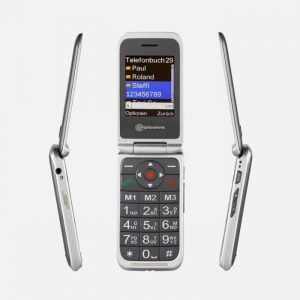 Amplicomms are a European company whose phones are starting to make real headway into the US, and with good reason. The company, a subsidiary of a serious audio manufacturer, only make phones for those with hearing problems, of which the M7000i is one.

When making something – anything – louder, distortion becomes a real problem. But Amplicomms have managed to keep the distortion in the M7000i down below 5% even at the highest setting. The tone is adjustable for different frequency needs. It has Bluetooth and a phonebook for 500 numbers. It also has the facility to have up to 5 emergency numbers that can be dialed instantly if required. The phone also has Talking Caller ID for up to 10 numbers.

The speakerphone is also amazingly loud without losing clarity, and full handsfree is available. All in all the Amplicomms M7000i is a terrific choice for those who need a little extra help with their cellphone needs. With a smart, lightweight clamshell or flip-top design the M7000i looks as great as it performs. 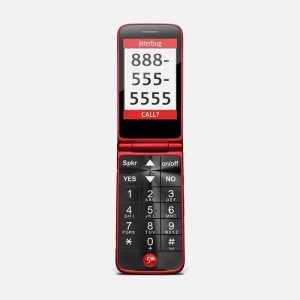 The longtime phone makers Alcatel manufactured this device. The Jitterbug Flip is designed specifically for those whose eyes and ears aren’t what they were.

Along with big clear buttons, the Flip is MT/T4 hearing aid compatible, meaning clear audio in any environment. As you’d expect, the Flip is a flip-top design and, when fully opened, sits nicely in the hand. Unlike many at this level, the Flip has a camera, a flashlight feature and Wi-Fi. For times when your hearing aid may not be in, a big, loud speakerphone is available.

There’s a dedicated charging port, so no fiddling with cables is needed. The Flip is controlled by a very simple Yes/No type menu system which is easily read on the bright color display. Alcatel have a great pedigree in telecommunications. And with the Jitterbug Flip, they demonstrates their commitment to the industry perfectly. There’s a reason why the Flip is one of the most popular mobile phones available among senior citizens. 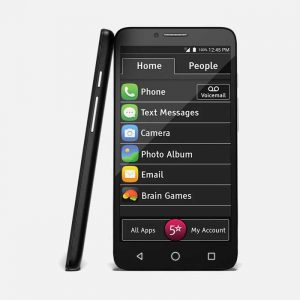 For those older users who are feeling a little more adventurous, Jitterbug also produce a smartphone-style phone. It contains all the great features of its flip-top sibling. There’s no app store here, as the SMART doesn’t use Android or iOS. But there’s a huge color 720p HD display, 4G connectivity, Wi-Fi and Bluetooth. It also includes a 5MP camera with autofocus and flash. Hosting a 2500mAh battery makes for all day performance.

All that is before we even talk about the way Jitterbug have made the on-screen menus easy to read and easy to navigate. Or that the SMART is M4/T4 compatible for those with hearing aids. There’s also 8GB of internal storage. You can add a MicroSD card for up to an extra 32GB of space for carrying movies, music or other files.

All in all, it’s about time phone makers realized that not everybody over the age of 60 is a technophobe. Nor are they too set in their ways to take on new experiences. Jitterbug have done it perfectly with the SMART. 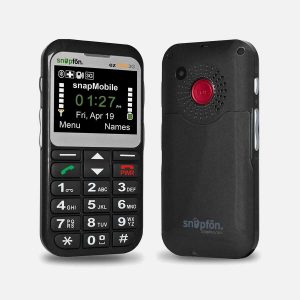 The Snapfon EZ is another cellphone which caters for both sight and hearing impairments. It has a high contrast display and big clear buttons for those with failing eyesight. Add that together with some great features for the hard of hearing.

M3/T3 hearing aid compatible, it has a big clear speakerphone. The Snapfon EZ also has a talking keypad which lets you know each number as you press the key. There’s a one-touch SOS button to make emergency calls in necessary without having to go into the phone book. Oh, and a built in LED flashlight for those moments in the dark!

The Snapfon EZ recognizes that things change with age. It goes a long way to providing help exactly where and when it’s needed. 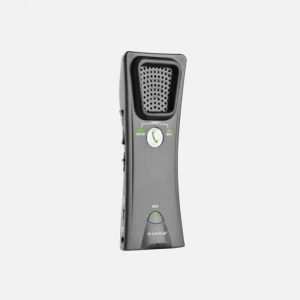 Our last device is a little bit different. The HearAll isn’t a phone, but is a Bluetooth-ready amplifier for use with compatible phones. With up to 40 dB of sound amplification available, the HearAll is very useful in all environments. It will work up to 30 feet away from the actual phone it is connected to.

In T-Coil mode, the HearALL can also be used as a normal Bluetooth handset for those with hearing aids. Included is tone control so you get the best possible experience. You can answer calls using just the HearAll handset, so feel free to  leave your phone in one place and still be connected.

If you love your phone but it just isn’t loud enough, the HearAll is the perfect companion for you.